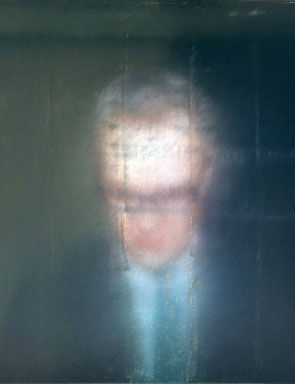 LONDON.- A groundbreaking exhibition devoted to one of the greatest living painters opens at the National Portrait Gallery on 26 February 2009. Gerhard Richter Portraits is the first major exhibition to show a selection of Richter's portraits across the entire span of his career.

Dating from the 1960s to the present, it includes important early black-and-white paintings made from magazine photographs, works based on private snapshots, a special installation of his celebrated series 48 Portraits, and a never-previously exhibited portrait of his daughter Ella.

Richter is widely regarded as one of the world's leading contemporary artists, a complex figure whose work from the early 1960s has moved between photographically derived figurative imagery and brightly coloured abstract painting. From the outset portraiture has been a key aspect of Richter's art but until now exhibitions of his art have focused on the wider sweep of his activity including his abstract work and, as a result, the richness of his portraits has been neglected. This exhibition represents a major advance in the understanding and appreciation of the artist's achievement by examining his portraits in detail.

The exhibition will comprise around 35 key paintings lent from major international public and private collections. Organised chronologically, Gerhard Richter Portraits will also highlight particular themes that focus on the sources of Richter's imagery in order to draw out the artist's principal preoccupations and main lines of development. These themes include The Most Perfect Picture (which focuses on Richter's early use of photographs from newspapers and magazines), Devotional Pictures (which examines his use of amateur photographs from family albums), Persistent Uncertainty, (the exhibition's central section in which the photographic sources of Richter's imagery are progressively obscured and manipulated), Art History, (focusing on images of Richter's associations within the art world), and Private Images, Personal Portraits (in which the artist's preoccupation with his family and his own image take centre stage).

Richter's first mature paintings were made in the early 1960s. Using photographs taken from magazines and newspapers, as well as those borrowed from his own private collection, he rebelled against the abstract, painterly ethos of the preceding generation, creating images that depicted recognisable subjects: people, family groups, individuals in newspaper stories, animals, buildings and ordinary objects. Such subjects were rendered in a flat, deliberately impersonal style that alluded to the photographic origins of the imagery.

Eschewing the glamour and materialism of Pop Art, Richter created a powerful body of work rooted in the ordinary, everyday reality of the observed world. But at the same time, during the painting process his photographically derived images were manipulated in subtle ways including blurring, in which sharp definition was deliberately obscured. As a result, paintings that allude to photography seem strangely removed from reality. In this way, his work posed questions about the nature of photography, identity, and the way images of the real world are perceived and understood. As Richter has said, his work engages with 'persistent uncertainty'.

Sandy Nairne, Director of the National Portrait Gallery, London, says: 'Gerhard Richter's portraits offer a wonderful opportunity for many visitors to see these outstanding works together for the first time. He is a master painter of our time.'