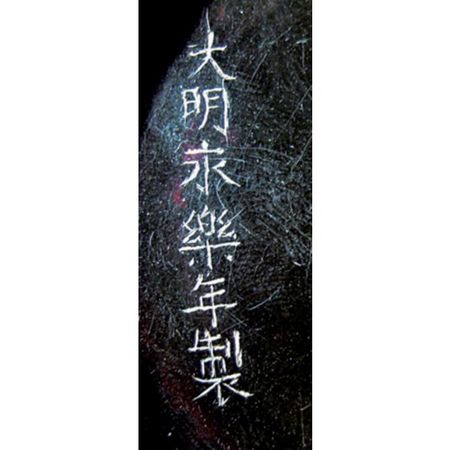 of compressed globular form delicately carved to reveal the layer of ochre-yellow lacquer beneath the cinnabar-red, the cover with a camellia blossom encircled by scrolling stems and smaller blooms and opening buds, the shallow sides of the box similarly decorated, the interior and base lacquered black, incised on the base with the six-character mark. 6.4 cm., 2 1/2 in. Estimate 120,000—150,000 HKD

NOTE: Cinnabar lacquer seal paste boxes elegantly carved with similar floral designs were made from the 15th century, and became characteristic from the 16th century onwards. Compare three unmarked examples held in museum collections, one included in the Chinese University of Hong Kong exhibition, 2000 Years of Chinese Lacquer, Hong Kong, 1993, cat. no. 50, one in the Tokugawa Art Museum, included in Imported Lacquerwork - Chinese, Korean and Ryukyuan (Okinawa), Toyko, 1997, cat. no. 59, and one in the National Palace Museum, illustrated in Masterpieces of Chinese Lacquer Ware, Taipei, 1971, cat. no. 18.