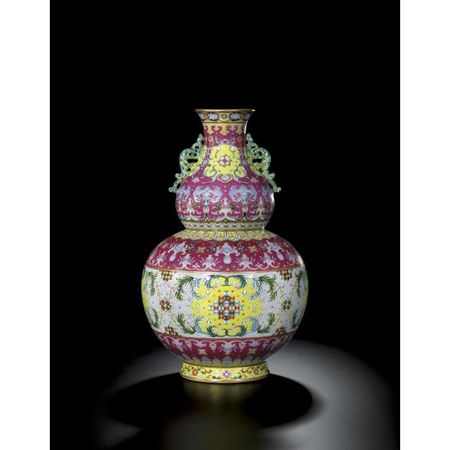 of well potted bulbous form tapering to a short waisted neck and a flared mouth, flanked by a pair of feathery acanthus handles, the lower bulb finely and meticulously painted in 'famille-rose' enamels with four diapers embellished with gilt, each reserved on a yellow ground and framed within feathery acanthus leaves, separated by further diaper motifs and reserved on a white ground deftly incised through the enamelling with scroll patterns, set between bands of ornately decorated pomegranate scrolls and diapers reserved on a warm ruby sgraffiato-ground, the waist with a band of interlinking floral coins above lotus lappets, the upper bulb similarly decorated with diapers framed within acanthus scrolls above further alternating pomegranate scrolls and bats, all below a floral band at the rim and pendant trefoils, the interior and base turquoise, with a central square reserved in white on the base for the six-character seal mark in iron-red. 36.9 cm., 14 1/2 in. Estimate 1,500,000—2,000,000 HKD. Lot Sold. 8,180,000 HKD

NOTE: While the classic shape, vibrancy of colours, ornate decoration, and turquoise interior and base are all archetypal features of Qianlong porcelain, the colour and decorative schemes of the present piece are extremely unusual and no other example appears to be recorded. This vase epitomises the dexterity of 18th century imperial porcelain manufacturers at Jingdezhen, who produced an immense variety of styles and constantly devised further novelties to satisfy the Qianlong emperor's predilection for idiosyncratic forms and designs. The Qianlong emperor is known to have commissioned artists producing wares for the court to make pieces that were challenging and impressive, allowing potters to become ambitious in their repertoire and thus create complex pieces that were innovative and unique. Once a large palette of enamel colours was attained, the possibilities were virtually unlimited.

The vase is an embodiment of several artistic traditions, ranging from Western motifs as seen in the acanthus leaves forming the handles and adorning the central band of decoration, to Chinese auspicious motifs, such as the bats and pomegranates. The 'paddy field' geometric pattern on the centre of the vase appears to borrow from damask textiles of the period, which were inspired by patchworked textiles of the 16th century. Patchwork clothing was believed to ensure a healthy growth for children, making it popular in the Ming and Qing dynasties. See a 16th century tabby illustrated in Feng Zhao, Treasures in Silk, Hong Kong, 1999, pl. 08.03; and an 18th century damask, ibid., pl. 08.03a.

Jiaqing dishes inspired by this geometric motif are known; see a ruby-ground example from the Weishaupt Collection, illustrated in Gunhild Avitabile, From the Dragon's Treasure, London, 1987, pl. 21; a turquoise ground version from the collection of Edward T. Chow, sold in these rooms, 30th October 2002, lot 258; and a lime-green ground dish, published in the Illustrated Catalogue of Ch'ing Dynasty Porcelain in the National Palace Museum, vol. II, Tokyo, 1981, pl. 102.