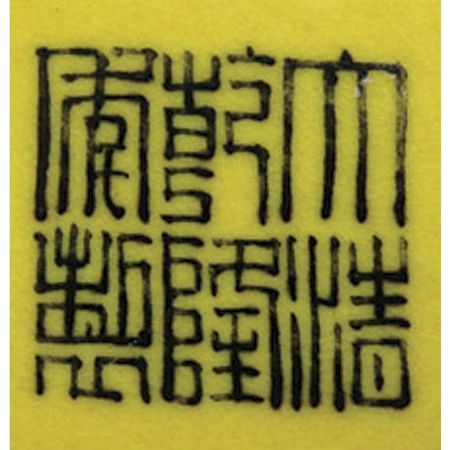 each delicately potted with a scalloped rim resting on a short slightly tapering foot, the interior with a central medallion finely incised with a pair of five-clawed dragons contending a 'flaming pearl' amid floral scrolls, the sides similarly decorated with a further pair of dragons chasing 'flaming pearls' amid floral scrolls below double-line bands, the exterior decorated with the same design, the designs picked out in bright pea-green against a yellow ground, inscribed on the base with the six-character seal mark in underglaze-blue. 13.2 cm., 5 1/8 in. Estimate 300,000—400,000 HKD. Unsold

PROVENANCE: A Japanese Collection, by repute.

NOTE: It is rare to find yellow-ground dishes decorated with two dragons and no other example appears to have been published. For examples of dishes decorated with a single green dragon on a yellow ground see a pair from the Hall Family Collection, sold in these rooms, 2nd May 2000, lot 565; another pair sold in our London rooms, 20 June 2001, lot 37; and a dish sold in our New York rooms, 21-22nd September 2005, lot 128.

The double-dragon design, which emerged during the Jiajing period (1522-1566), enjoyed popularity during the Wanli reign (1572-1620) and developed into a more elaborate style under the Kangxi emperor. The present pieces were inspired by a combination of its Ming and Qing predecessors; see a yellow-ground dish with two green dragons chasing a flaming pearl, with Jiajing reign mark and of the period, sold at Christie's London, 25th November 1974, lot 228; and a more densely decorated dish with dragons and flaming pearls in green enamel on a blue ground, with Kangxi reign mark and of the period, included in the exhibition The Wonders of the Potter's Palette, Hong Kong Museum of Art, Hong Kong, 1984, cat. no. 25.

Two dragons facing each other symbolise a happy meeting.