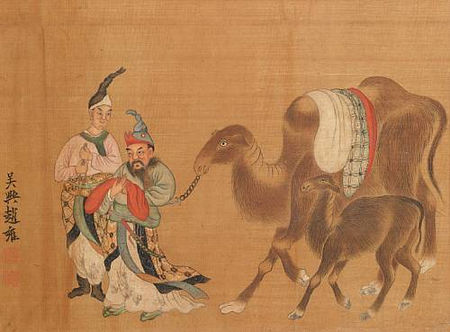 Ink and colour on silk, a set of eight paintings each finely painted with generals, traders and ministers with Bactrian camels, horses and elephants, engaged in various activities including tribute and dialogue, one with four-character inscription reading Wu yu Zhao Yong with two seals, all framed and glazed. 28.5cm x 38.8cm (11¼in x 15¼in). (8). Sold for £10,800

Note: The title of the eight paintings can be translated as 'The States Wu and Zhao of Yong'. Wu was a state during the Spring and Autumn Period in China with its capital in Suzhou. The Wu people were considered semi-barbaric by ancient Chinese historians, as reflected in their depictions in the paintings. The state of Zhao was one of the significant Chinese territories during the Warring States Period with its capital in modern-day Handan, Hebei Province. It is recorded that the warriors of Zhou were instructed to dress in Xiongnu armour, the confederation of nomadic tribes from the Steppes. Yongzhou refers to the territory lying west of the Yellow river and north of the river Wei, which was one of the nine largest ancient division of China, Jiuzhou.