LONDON.- The Impressionist and Modern Art Evening Sale will take place at Christie’s on 23 June and will offer 46 works of art, including exceptional museum-quality masterpieces by Claude Monet, Pablo Picasso, Franz Marc, Joan Miró, Camille Pissarro and Marcel Duchamp. The auction is expected to realise in excess of £40 million and will be on public view at Christie’s in London from 18 to 23 June 2009.

Springende Pferde, 1910, by Franz Marc (1880-1916), an exciting breakthrough painting in which the artist embraces the influences of the avant gardes of the period, and which is offered at auction for the first time (estimate: £3 million to £4 million).

Painting, 1949, by Joan Miró (1893-1983), one of an outstanding group of pictures described as being among the most important of the artist’s career which is expected to realise £2.2 million to £2.8 million.

Giovanna Bertazzoni, Director and Head of Impressionist and Modern Art, Christie’s London: “Impressionist and Modern art continues to attract global interest as illustrated by the strong results at our recent auctions in London in February and in New York in May. Collectors continue to show a great appetite for important works of art that are in good condition, fresh to the market and which are priced at the right level. In London this June, we will offer a selection of rare works most of which will present a rare opportunity to collectors, and many of which were created at formative moments in the careers of many of the 20th century’s most important artists. Leading highlights include masterpieces by Franz Marc and Pierre Bonnard which will be both offered at auction for the first time, one of the only important early drawings by Marcel Duchamp to remain in private hands and important works by Pablo Picasso, Joan Miró, Claude Monet and Camille Pissarro.”

Au Parc Monceau, 1878, by Claude Monet (1840-1926)
Painted in 1878 when Claude Monet’s ‘Impressionist’ style was still attracting fierce criticism, the present work has been on loan to the Philadelphia Museum of Art since 2001 and is one of a series of three similar paintings painted in the same period, one of which is in the Metropolitan Museum, New York (estimate: £3,500,000 to £4,500,000). Early in 1878, Monet moved from Argenteuil to Paris hoping to escape his creditors and find new patrons who could buy his work and ease his financial burden. The artist is thought to have visited the city park soon after his move at the suggestion of Ernest Hoschedé, one of his most important early patrons. Monet’s wife, Camille, gave birth to their third child in March 1878, and it is believed that the group in the foreground of the picture includes Camille, the infant and Alice Hoschedé, the patron’s wife, who was widowed soon afterwards and married Monet in 1892.

The painting offers an exceptional depiction of a Parisian garden, the artist having employed a subtle interplay between light and shadow which had become an essential aspect of his own brand of Impressionism. A group of figures in the background of the painting is illuminated by bright sunshine, while the group in the foreground is enveloped in lush, spring shadows. Painted soon after his move to Paris in the first half of 1878, the city garden of Parc Monceau acts as a bridge between Monet’s rural landscapes of Argenteuil and his new urban surroundings in Paris; he painted the celebrated series of pictures of the Gare St. Lazare the following year. 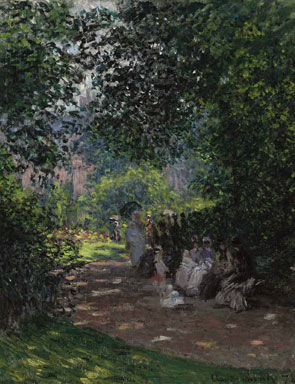 Springende Pferde, 1910, by Franz Marc (1880-1916)
Springende Pferde was painted in 1910, the year that Franz Marc formed a close, productive and formative friendship with August Macke. It was not until the following year that with Jawlensky and Kandinsky, they would establish the Blaue Reiter group who are considered to mark the high point of German Expressionism. The present picture is a breakthrough work which dates to a highly formative period of the artist’s career. Painted the year after the publication of Filippo Marinetti’s Futurist Manifesto, it shows us the artist’s developing fascination with motion and movement. Marc used painting to explore the mystical inner forces that animate nature. He preferred to paint animals, believing them to be more spiritual than man, and the present work shows the distinct influence of Divisionism, Futurism and Expressionism. The present work was acquired from the artist’s widow circa 1937 and has since passed by descent. It will be offered at auction for the first time, and is expected to realise £3 million to £4 million. Deux nus: un fort et un vite, 1912, by Marcel Duchamp (1887-1968)
Deux nus: un fort et un vite, 1912, by Marcel Duchamp (1887-1968) is one of very few important early drawings by the artist to remain in private hands (estimate: £800,000 to £1,200,000). Dating to the period when the artist stormed onto the art scene with great controversy, it is the first of three radical and groundbreaking studies that Duchamp executed in Spring 1912 in preparation for his painting ‘The King and Queen Surrounded by Swift Nudes’, now in the Philadelphia Museum of Art. In early 1912, Duchamp painted Nude Descending a Staircase and submitted it to the Salon des Indépendantes in Paris. The painting was rejected, perhaps because the judges saw Duchamp’s work as a jibe towards Cubist art. He later submitted the painting to the 1913 Armory Show in New York where it became the centre of controversy once again. The King and Queen Surrounded by Swift Nudes, for which the present work is the early study, was painted in a somewhat similar style and depicts figures in motion, juxtaposed with static entities. Cubism was naturally static, and Duchamp mocked its pretensions by adding movement, seeking a more fluid fourth dimension. Formerly in the collection of Gabrielle Buffet-Picabia, it has since been in the collection of the present owners for 30 years and is offered at auction of the first time. Homme à l'épée and Nu assis et joueur de flute by Pablo Picasso (1881-1973)
Important works from the later years of Picasso’s life continue to attract both modern and contemporary art collectors and in New York in May, the two top lots at Christie’s auction of Impressionist and Modern Art were his Mousquetaire à la pipe, 1968, which realised £9.8 million, and Femme au chapeau, 1970, which sold for £5.2 million. The auction in June will offer two large, bold works from the 1960s; Homme à l'épée, 1969, which is expected to realise £5 million to £7 million and Nu assis et joueur de flûte, 1967, which carries an estimate of £3 million to £4 million (illustrated left). Nu assis et joueur de flûte is vigourous and inventive, and depicts a musician playing a flute to a nude woman who sits at the left foreground of the painting. During the 1960s, Picasso spent much time exploring the theme of the artist and the model. The female in the present work has a visual similarity with Jacqueline, the artist’s wife, and the skeletal flautist is likely to represent the artist who was becoming increasingly aware of his own mortality. Painting, 1949, by Joan Miró (1893-1983)
Painting, 1949, by Joan Miró (1893-1983), is one of the outstanding group of pictures executed in 1949 and 1950 known as the ‘slow’ paintings, which were described by his biographer Jacques Dupin as being among ‘the most important’ of the artist’s career. It is expected to realise £2.2 million to £2.8 million. A shy, modest character, Miró was one of the leading artists of the Surrealist movement. The present work was painted after a decade in which the Spanish Revolution and the Second World War had forced the artist to move from Spain to France, and then back to his native homeland. Having traveled to America for the first time in 1947, and having received great praise for his work there and while journeying around Europe, Miró returned to Barcelona. Stimulated by praise and plaudits, the following years were prolific for the artist and in 1949 and 1950, he worked on two distinct series of paintings, none of which were titled. The ‘slow’ paintings were elaborate and were subject to careful planning and execution; the ‘spontaneous’ paintings were more instinctive and improvised. The present work is one of the finest of the ‘slow’ paintings, and is the result of the artist’s gradual and carefully considered painting process during one of his most impressive periods.