NEW YORK, NY.- The Museum of Modern Art presents James Ensor—the first exhibition at an American institution to feature the full range of his media in over 30 years—from June 28 through September 21, 2009. James Ensor (Belgian, 1860–1949) was a major figure in the Belgian avant-garde of the late nineteenth century and an important precursor to the development of Expressionism in the early twentieth. In both respects, he has influenced generations of later artists.

Ensor’s daring, experiential work ranges from traditional subject matter such as still life, landscape, and religious symbolism to more singular visions, including fantastical scenes with masks, skeletons, and other startling figures. He made work in a wide range of styles and dimensions, from large-scale paintings and drawings to tiny prints of only a few inches. The exhibition elucidates Ensor’s contribution to modern art, including his innovative and allegorical use of light, his prominent use of satire, his deep interest in carnival and performance, and his own self-fashioning and use of masking, travesty, and role-playing.

Approximately 120 of Ensor’s paintings, drawings, and prints are included in the exhibition, most of which date from the artist’s creative peak, 1880 to the mid-1890s. The exhibition is organized chronologically, and within that chronology are thematic groupings such as Ensor’s self-portraiture, or his satirical works. A number of works, including the first two drawings from his monumental Aureoles series of 1885–86, The Lively and Radiant: The Entry of Christ into Jerusalem and The Rising: Christ Shown to the People, have never before been seen in the United States.

Ms. Swinbourne explains, “The diversity of Ensor’s work has enabled him to slip cunningly out of the grasp of anyone seeking to seize and place him, whether in an artistic movement or a historical continuum. This is part of the appeal that, then and now, has seduced viewers of his work as well as artists—who have come to revere him as an ‘artist’s artist,’ a title bestowed only on the most deserving.”

The first painting on view in the exhibition is The Scandalized Masks (1883), an example of the evocative paintings of masks in portraits and fictive dramas for which Ensor is best known. Ensor lived in Ostend, Belgium—a fashionable resort known for its beaches, spas, and casino—from his birth in 1860 to his death in 1949. He left Ostend only for a brief period, from 1877 to 1880, to attend the Académie royale des beaux-arts, a prestigious training ground for young artists. Ensor was surrounded by masks throughout his life. He saw them for sale in his family’s souvenir shop in Ostend, and worn by revelers in the annual Carnival celebration. The bawdry puns and silly pratfalls of traveling vaudeville acts in Ostend, and even his grandmother’s eccentric penchant for dressing up in strange costumes, all nourished Ensor’s appreciation for farce and disguise. Early works in the exhibition, such as The Lamp-Lighter (1880), were made soon after Ensor’s schooling in Brussels. Ensor masterfully combined the genres of still life, portraiture, and interior scene in a painting considered among his best of the period, The Oyster Eater (1882). This life-size image shows his sister Mitche absorbed in a meal of oysters at a table decorated with flowers, dishes, and linens. Every element of the painting illustrates Ensor’s interest in the power and qualities of light. The Oyster Eater made its first public appearance at the 1886 exhibition of Les Vingt (Les XX), an avant-garde art society cofounded by Ensor in 1883 as an alternative to the official academic Salon. Ensor regularly exhibited in Les Vingt annuals, and the group would prove critically important for his artistic development.

Ensor’s overarching interest in light soon came to dominate his artistic vision, inspiring him to develop a drawing technique that would make objects seem suffused by light. Discovering that this formal innovation had expressive potential, he soon made light a subject in itself, an agent of symbolic intention, conveying ideas and evoking mood. He perfected his drafting techniques in Visions: The Aureoles of Christ, or The Sensibilities of Light, a series of six drawings from 1885–86. The series indicates a switch from Ensor’s depiction of reality-based subjects toward more imagined, fictionalized scenes. The most accomplished of these drawings, The Lively and Radiant: The Entry of Christ into Jerusalem (1885), presents a biblical event in a contemporary, urban setting resembling Brussels, and is especially notable for its large dimensions. At nearly seven feet high, it is a scale that, at the time, was almost always reserved for painting.

A restless and incessant experimenter with a variety of mediums and techniques including collage and hand-printed etching, Ensor even revisited works completed years earlier, adding colors and images that often radically transformed the originals. For example, Ensor revisited his Self-Portrait with a Flowered Hat of 1883, adding a plumed hat and other elements that make the new image resemble a self-portrait by the Flemish Baroque painter Peter Paul Rubens.

He also depicted himself in his works repeatedly, in keeping with his own sense of subversive play, while divulging the influence of theater and popular culture on his work. In Self-Portrait with Masks (1899), he portrays himself as a young artist—in the same pose as Self-Portrait with a Flowered Hat (1883/1888), finished 11 years before. His steady regard, outsize dimensions, and red hat set him apart from the masked crowd, to which he turns his back. Proclaiming his allegiance with masquerade and performance, Ensor opts for a public image that is overtly and completely contrived.

Ensor had a number of lifelong obsessions that were prominent subjects in his work—masks, light, himself, and death. Skulls or full-body skeletons appear in his works repeatedly and in a variety of ways. In Skeletons Trying to Warm Themselves (1889), a group of skulls draped in fabric absurdly and vainly seek heat from a dead stove. Ensor used the image of death to depict people he despised, such as the two skeleton-critics ripping apart a witty, metaphorical version of himself in Skeletons Fighting over a Pickled Herring (1891). And death was even a theme of Ensor’s self-portraits, as with My Skeletonized Portrait (1889) and The Skeleton Painter (1895 or 1896). These two works were based on photographs: he transformed his pictured naturalistic countenance into skeleton versions of himself. Ensor’s use of photography as pictorial source material and his practice of collage were consistent with his experimental nature, as they are both techniques that placed Ensor ahead of his time.

A study room includes a wrap-around chronology on its walls that affords viewers the opportunity to learn more about the life of Ensor and his diverse range of interests. Beyond his career as an artist, he was involved in music, choreographed a ballet, and was an avid writer. This multitude of interests translates directly into the diversity of Ensor’s artistic oeuvre.

The exhibition concludes with satirical works focusing on contemporary political and social issues of Ensor’s time, which use grotesque exaggeration and base humor to make their point. Influenced by folk tradition, satirical journals, actualités, and burlesque theater, these pieces make Ensor’s radical individualism and political perspective patently clear. Examples are Doctrinaire Nourishment (1889), a scatological image of the king and other figures of Belgian authority excreting feces onto a group of citizens, and The Wise Judges (1891), a harsh criticism of the country’s judicial system. Ultimately, the exhibition presents Ensor as a socially engaged and self-critical artist involved with the issues of his times and with contemporary debates on the nature of modernism. 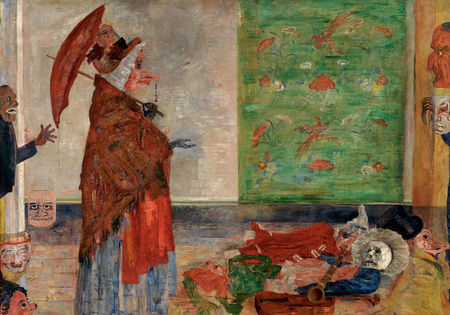