NEW YORK, NY.- This fall the Rubin Museum of Art (RMA) explores the history and meaning of the mandala, Himalayan Buddhism’s artistic representation of man and the universe. Mandala: The Perfect Circle, organized by RMA Chief Curator Martin Brauen, begins with the mysterious early forms of this perfect circle more than a millennium ago and extends to the role of the mandala as a key element in the Buddhist thought and meditation of today.

On view from August 14, 2009, through January 11, 2010, the exhibition is the first of three in The Cosmologies Series, the museum’s ten-month-long investigation of how different cultures have visually represented the universe, from the solar system to the self.

Mandala: The Perfect Circle takes visitors from the 8th to the 21st century, displaying some of the oldest known mandalas in the world, large paintings found in the Dunhuang caves in northwestern China, alongside virtual, computer-generated varieties created by designers at Cornell University and Zurich University. On rare loan from the Musée Guimet in Paris, an early Dunhuang mandala masterfully depicts a crowded pantheon of deities, each situated symmetrically in its proper symbolic place. The virtual mandalas will provide an explosion of intense digital color in rare three-dimensional views of a mandala’s creation and final form.

“The mandala is one of Buddhism’s singular conceptual and artistic achievements,” says Brauen. “Sanskrit for any circular or disklike object, the word only assumed its current association with the cosmos and its role as an aid to meditation with the advent of later Buddhism called Mahayana Buddhism.”

Considered one of the foremost experts on mandalas, Dr. Brauen organized the world’s first exhibition on the subject in Zurich, Switzerland nearly two decades ago and, in the process, made the first film documenting the making of a sand mandala under the guidance of His Holiness the Dalai Lama.

The objects on display in Mandala: The Perfect Circle were created for religious use and not as works of art. Four fragile, delicately limned and tinted pages, which are distinguished by graceful, rhythmic calligraphy, would have provided ritual guidance as part of a 400-year-old “instruction book” for Buddhist monks. Hand-size amulets, fashioned from cloth, paper, and brightly colored string, represent the last step in a ritual process whereby a woodblock is made and hand printed onto cloth, saffron is tucked inside, a prayer is offered, and the resulting sacred “package” is wrapped in a prescribed way, according to the year in which its owner was born.

Reflecting the devotional nature of these objects, the bright, contemporary, three dimensional mandala on loan from New York’s Tibet House, which is decorated with cotton threads dyed primary colors and crossed into traditional geometric patterns, is of no less value than the large, three-dimensional mandala crafted of bronze and copper, on loan from the Namgyal Monastery in India, or the gilded bronze reliquary adorned with turquoise and coral stones, glass, and shells, on loan from New York’s American Museum of Natural History.

Visitors to Mandala: The Perfect Circle will find mandalas conceived as concentric circles, circles within squares, squares within circles, lotus blossoms, six-pronged stars, or inverted, crossed triangles. A deity, sometimes with a partner, is usually situated in the middle of the central disk, surrounded by four, six, eight, ten, or twelve assembly deities set in an additional circle. As such, the mandala’s very construct graphically mirrors the Buddhist notion of the cosmos and of the human being. In addition to paintings, reliquaries, and amulets, the exhibition includes tapestries, sculptures, and utensils used in sacred ceremonies and a time-lapse film of a mandala formed in sand.

Altogether, some 70 objects have been assembled for Mandala: The Perfect Circle from private and public collections around the world. Institutional lenders include the the Musée Guimet, Paris; Museum of Fine Arts, Boston; Kimbell Museum of Art, Fort Worth; Ethnographic Museum of the University of Zurich; Thyssen-Bornemisza Collections, Austria; The Metropolitan Museum of Art, New York; and the Philadelphia Museum of Art. 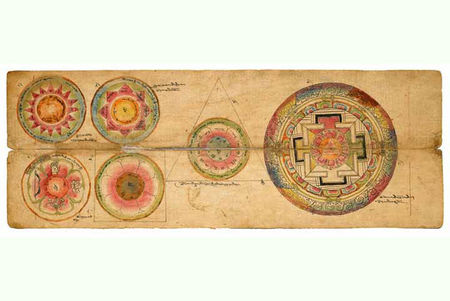 The Cosmologies Series
This fall, RMA opens three exhibitions consecutively, each exploring in a different way how humankind has visually represented the universe, from the solar system to the inner self. Mandala: The Perfect Circle, opening August 14, 2009, is the first.

The second, opening October 7, 2009, (and on view through January 25, 2010) is The Red Book of C. G. Jung: Creation of a New Cosmology, which displays for the first time a legendary cultural touchstone: the red leatherbound notebook in which Carl Jung developed his principal theories of archetypes, collective unconscious, and the process of individuation. The exhibition coincides with a major event in publishing, W.W. Norton & Company’s publication of a facsimile and translation of Jung’s original. This unprecedented exhibition marks the first public presentation of the preeminent psychologist C. G. Jung’s (1875-1961) famous Red Book. In the book Jung developed his principal theories of archetypes, collective unconscious, and the process of individuation. Many contemporary scholars regard the text as the most influential unpublished work in the history of psychology. More than two-thirds of the large, red, leather-bound manuscript’s pages are filled with Jung’s brightly hued and striking graphic forms paired with his thoughts written in a beautiful, illuminated style. Jung was fascinated by the mandala—an artistic representation of the inner and outer cosmos used in Tibetan Buddhism to help practitioners reach enlightenment—and used mandala structures in a number of his own works. Jung’s first known mandala-like work, Systema mundi totius (1916), will be on display. Created between 1914 and 1930, the Red Book has never before been seen in public, outside the circle of Jung’s family and very close friends. Alongside the 95-year-old volume will be a number of oil, chalk, and tempera paintings and preparatory sketches related to it and other original manuscripts, including the Black Books, which contain ideas and fantasies leading up to the Red Book. The exhibition coincides with W.W. Norton & Company’s publication of a facsimile and translation of the Red Book.

The third exhibition in the series, opening December 11, 2009, is Visions of the Cosmos: From Milky Ocean to Black Hole, an exhibition that will examine the ways that humans interpret and visually represent the creation and structure of the universe, including contemporary views, and humankind’s place within it. Visions of the Cosmos: From Milky Ocean to Black Hole spans history, geography, and religion to examine the ways in which different cultures view their place in the universe.

As the title suggests, visitors will encounter Eastern and Western perspectives of the cosmos. "Milky Ocean" refers to the churning sea central to a Hindu creation belief; "Black Hole" speaks to the West's explorations of space and the mysterious black holes of the cosmos.

For an Eastern perspective, Visions of the Cosmos explores the deity-centered cosmologies of Buddhism, Hinduism, and Jainism, which envision gods as primary players. For the Western perspective, images representing the human-centered cosmology of Christianity in the middle ages are considered, as well as those representing the shift to an astrophysical world-view embraced during the Renaissance. Sections of the exhibition will also be devoted to the intricate cosmic constructs of the Kabbalah and alchemy.

A number of Buddhist stupas, created to house the relics of a deceased Buddha or teacher and depict the cosmos in three-dimensional form, will be on view, as will a pair of gilt three-dimensional mandalas which represent a perfected universe intended as an offering to deities. The exhibition ends with photographs representing current astrophysical findings and a virtual trip through the universe via a digital simulation created by the American Museum of Natural History.