Vessels made in animal form constitute virtually the only bronze sculpture known from the Shang period. Besides this well-known version of an owl, rare examples of quadrupeds including buffalo, boar, rhinoceros, elephant and ram have also survived. The "Pillsbury Owl" is the oldest and most naturalistic of the few remaining owl-shaped tsun. Standing near the beginning of the Anyang period (1400-1027 b.c.), it represents a charming, though seldom practiced and short-lived tradition of casting ceremonial vessels in the shapes of animals. 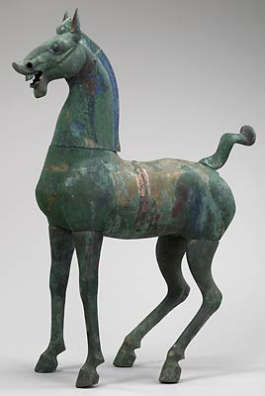 This magnificent statue of a young stallion represents one of the fabled "heavenly horses" of the Eastern Han dynasty (A.D. 25-220). Imported along the Silk Road from Ferghana in Central Asia, western horses were greatly admired for their strength, size, and endurance by the Han military and aristocracy. All members of Han elite owned horses for riding and to pull their beautifully appointed carriages. Bronze horses such as this one were placed in elaborately furnished aristocratic tombs and were meant to provide transportation for the deceased in the afterlife.
This horse was constructed of nine separately cast bronze sections. The surface of the bronze has corroded to brilliant green and blue tones. Traces of paint--black, red, and white--are clearly visible in areas around the eyes, mouth, neck, mane, and belly. The original coppery bronze color is also visible in large patches around the girth of the horse.
Most large-scale bronze horses, such as this one, have come from Eastern Han tombs in southwest China, principally Szechwan and Kweichou provinces. This outstanding example of an Eastern Han bronze sculpture is the first horse of its type to enter an American collection.

Next to the Buddha, the most popular of all Buddhist deities is Kuan-yin, commonly called the Bodhisattva of Compassion. Due to its Indian origin, early Kuan-yin images were represented as Gandharan princes sumptuously dressed in dhotis and adorned with silk scarves and rich jewelry. Held in the left hand is a lotus bud, the Buddhist symbol of purity.
This figure of Kuan-yin is especially significant in that it provides the only dated example of a regional sub-style that marks a departure from the rigid frontality that characterized the sculpture of earlier generations. Inscriptions on the base date the sculpture to 571 and indicate it was commissioned by Meng-yen, a district magistrate; Meng Sung-hsun, a village head; and 41 civic leaders who helped establish a temple at Ku-shih po-Ssu near Sian in Shansi province. By 581, the statue had been desecrated by anti-Buddhists but in that year, according to the second inscription, the temple was restored and rededicated. 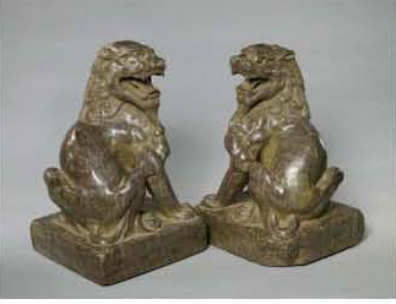 Bodhisattvas are Buddhist deities who have forgone entrance into Nirvana until that time when all beings have attained enlightenment. In China, Kuan-yin became the most popular bodhisattva and was widely worshipped as the deity of mercy and compassion.
This magnificent example from north China is constructed of removable wooden sections that still retain traces of original pigment. The sculptural style is naturalistic, detailed, and fully three-dimensional. Several sections of the robes exhibit fine textile patterns executed in gold leaf, the eyes are inlaid crystal, and the original painted mustache is still clearly evident. The image is attired in the sumptuous silk garments and gold jewelry befitting a bodhisattva. The elaborate hairstyle was originally encased by a gilt metal crown now missing.
Seated cross-legged in the lotus position (vajrasana), both hands turn up with thumbs touching the middle fingers in the gesture of discourse or argumentation (varada mudra). Carved during the last creative epoch of Chinese Buddhist sculpture, this splendidly attired image expresses the new humanism of the day while capturing the gentle, benign calm of near enlightenment. 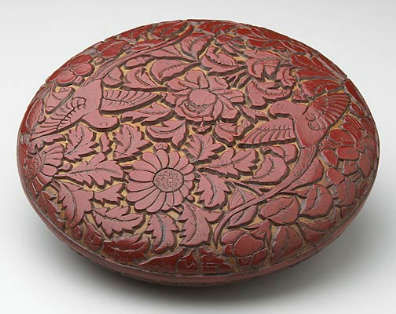 The slightly domed lid of this shallow bowl is densely carved with two parakeets flying amongst flowering camellias, gardenias, and chrysanthemums. The box is embellished with a single flower each of tree peony, gardenia, camellia, and prunus all carved down to a buff ochre ground. The interior is of brown lacquer. One of the most important technical innovations of Southern Sung was lacquer carved with pictorial designs. As is typical of this earliest stage, the surface is relatively two-dimensional; there is virtually no overlapping of forms; the contours are cut at an angle with little rounding of edges; and there is no relief carving or incising to indicate texture or depth. By the fourteenth century, artists had mastered pictorial devices like foreshortening, overlapping, and fine incisions to create pictorial images that are more three-dimensional and naturalistic. This cosmetic or incense box is an early example of a style of carved lacquer featuring a "two-bird" and flower motif in the main register. This basic motif remained popular for over a century into early Ming. Large numbers of covered porcelain boxes of this general shape and size were made during Southern Sung and Yuan and shipped throughout Southeast Asia. 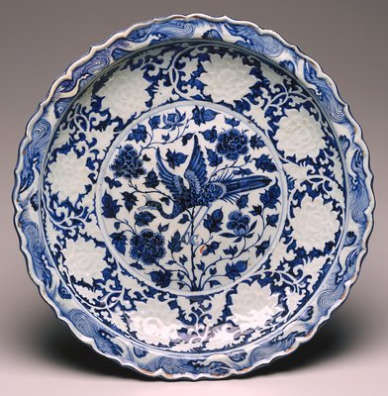 Imported Chinese blue-and-white strongly influenced Middle Eastern ceramic traditions. This magnificent plate was produced in the great ceramic town of Ching-te-chen in southern China specifically for the Middle Eastern market. Near the beginning of the blue-and-white tradition, Middle Eastern merchants living in China, who understood the ceramic needs and decorative taste of the Islamic countries, most likely commissioned works like this. It was, for example, the custom to serve food from large plates in Islamic countries but not in China. Likewise, the foliate rim and the densely painted floral decor executed with imported "Mohammadan blue" (cobalt oxide) were aimed specifically at Middle Eastern taste, which the Chinese considered somewhat vulgar during the fourteenth century. The carved wares of the fifteenth century are considered the finest of all carved lacquer wares. They were greatly appreciated by members of the Ming and Ch'ing courts and the characteristics of these classic imperial wares of early Ming set a connoisseurship standard that has persisted to the present day.

This circular box is exquisitely carved on the top with a landscape depicting a pavilion and figures. The carving is very deep indicating around a hundred layers of lacquer were applied which would mean that over a year would have elapsed before the piece was ready to be carved. Works made for the court exhibit extremely fine craftsmanship and this box bears a six-character reign mark on the base dating it to the Yung-lo reign (1404-1424). Large screens are probably the rarest category of surviving Ming style furniture. Solid panel screens were placed inside the main entrance to buildings where they provided privacy and protection from draughts while dispelling negative cosmic energy (ch'i) seeking to harm the occupants within. They were also used as honorific backdrops for the chairs or thrones of important individuals.
Monumental in scale and exceptionally well carved, this rare stationary screen with its original marble panel is considered by many to be the finest of its type in existence. The wooden members of this large frame are mortised and tenoned. The central marble panel is surrounded by an inner framework filled with perforated tao huan panels elaborately carved in openwork with hornless dragons. The extraordinary openwork carving is double-faced and cut from timber thick enough to impart a sense of three dimensionality. Marble panels from Ta-li in Yunnan province, evocative of mountainous landscapes in their natural figurations, were favorite panel insets for solid screens. 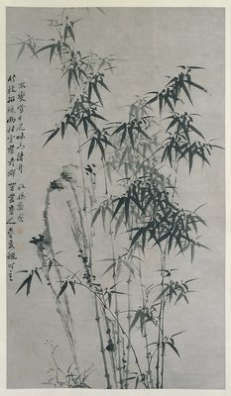 Cheng Hsieh was born in Hsing-hua near Yang-chou. Although his family lived in genteel poverty, Cheng was a good student and passed the highest government exams in 1736. He studied and produced poetry, calligraphy, and Peinture while ably serving as district magistrate in Shantung province. Undisciplined, outspoken, and passionate about public service, Cheng resigned in frustration in 1753 and established himself as a distinctive member of the group known as the Eight Eccentrics of Yang-chou. He is best known as an artist who closely integrated calligraphy with orchid and bamboo paintings. His poem reads:

The multitudes of plants and flowers are in vain;

Only the elegant plum has greater virtue. This mountain, apparently the largest piece of historic carved jade outside of China, was commissioned in 1784 by the Ch'ien-lung emperor (1736-95) whose own poem appears carved on the backside. The front displays a longer verse, the Lan T'ing Su ("Prelude to the Orchid Pavilion"), a famous poem composed in 353 by Wang Hsi-chi, perhaps the greatest calligrapher of the Far East. The occasion for the poem is illustrated by this jade carving, a literary gathering of poets and scholars organized by Wang at Lan-t'ing, the Orchid Pavilion. Several literati can be seen writing, drinking wine, and collating texts near the Orchid Pavilion at the foot of Mt. Hui-chi. 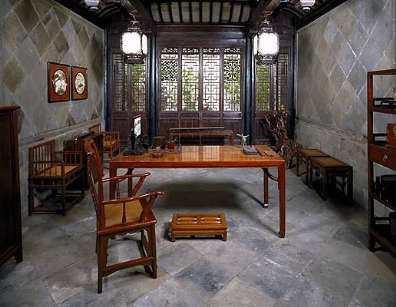 This library and its attached rock garden are from a large Ch'ing dynasty residence located in the West Tung-t'ing Hills district of Lake T'ai in the village of Tang-li. A commemorative plaque in the garden wall dates the building to 1797 while an inscription on one of the ceiling beams names the library "The Studio of Gratifying Discourse." After the reception hall, the library or study can be seen as the most important room in an educated upper-class household. The library and its two small attached rock gardens featuring contorted stones from the Lake T'ai region offered a quiet spiritual sanctuary within an urban setting. It was here that scholars could read, write, paint, examine antiques, and converse informally with friends. The educated merchant class and scholars of the Chiang-nan region from which this room comes created an economic and cultural climate during Ming and Ch'ing in which the arts flourished. Private libraries and gardens were essential to the enjoyment and production of literati art.