Souren Melikian, "The Chinese Gems I Would Have"

Souren Melikian, "The Chinese Gems I Would Have" 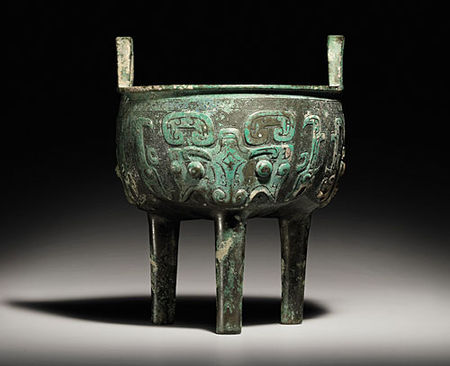 A stunning Shang Dynasty tripod, designed as a ritual food vessel, went for $86,500, well above the $30-50,000 estimate in March. Courtesy Christie's

"... For those who want to collect masterpieces on a truly large scale, Chinese art is the most rewarding, not to say the only hunting ground.

It may sound like a paradox, given the exponential rise in the number of collectors, both in mainland China and in the overseas communities. So far, however, the impact of their presence in the Western markets has chiefly made itself felt on the later periods of Chinese art, from the Kangxi reign (1662-1722) to the early 19th century. Add that anything provably linked with the Palace — as demonstrated, for example, by certain reign marks painted underglaze on porcelain — triggers wild competition among Chinese bidders.

From the perspective of Western (and Japanese) connoisseurs, all this leaves aside much of the greatest in Chinese art. Sublime pieces could be acquired this past season, ranging from Shang bronzes of the late 12th and 11th centuries B.C. to Tang and Song pottery and porcelain from the late 7th to early 13th centuries.

The most stunning pieces surfaced in New York on March 18, as Christie’s dispersed large consignments from collections formed long ago. This made them particularly attractive because the 1970 cutoff date, established by the UNESCO Unidroit Convention, is increasingly seen by experienced market hands as a time limit beyond which the acquisition of works of art exported from the country of origin without official permit is fraught with long-term risks. Restitution claims might be made in the future, particularly concerning early bronzes and ceramics illicitly dug up from underground caches, which are never accompanied by any permits. These are in real danger of being branded as "stolen goods," with the additional opprobrium of having involved the irreparable loss of the archaeological context, thus destroying the unwritten documentation of cultural history.

Some of the high prices paid for works demonstrably sold in the Western market prior to 1970 probably reflected this fear of a threat hovering over post-1970 exports from China.

A marvelous tripod bronze vessel of the 12th or 11th century B.C. went up to $86,500. It had been bought by the late Arthur M. Sackler from J. T. Tai & Co. on March 24, 1965. The mesmerizing power of the stylized feline mask, called taotie, which is cast in low relief on the sides, is difficult to resist. This particular type of Shang bronze does not seem to have been included among the more recent finds that began to flood the Western market in the early 1980s. Splendor aside, the tripod bronze was a rarity.

However, when objects become too rare, they no longer register with most bidders and can be quite cheap. Although Shang ivory carvings of the 12th century B.C. from the Anyang site are virtually unobtainable (most are in museums), it only took $9,375 to get a magnificent fitting carved with a taotie mask. The experts themselves had underestimated its significance, as witness the unduly modest $3,000-5,000 estimate. Discussed in scholarly publications as early as the 1950s and exhibited at Columbia University in February 1965, the piece could go into any major museum. 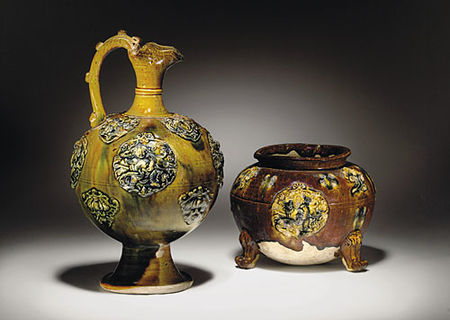 The unusual set of Tang dynasty pottery that sold at Christie's, a wine ewer and globular jar, was a steal at $21,250, although the price nearly matched the piece's high estimate. Courtesy Christie's

I would have most readily succumbed to the lure of some Tang and Song ceramics. The rarest lot by far consisted of a wine ewer and a small globular jar offered together. Medallions molded separately and applied on both pointed to a date around the early 8th century A.D. Most important, these showed the two pieces to have been made as part of a set. Few sets ever reach the market as such, because the diggers break them up, and, if diggers do not, the dealers who handle them tend to sell them a piece at a time.

This set was exceptionally beautiful. The medallions covered in touches of green, ochre and ivory glaze stood out on the amber ground of the ewer and the deeper russet ground of the globular jar. The outline of the lobed medallions cusped at the top, and the riders — in flying gallop, hunting deer — were borrowed and reinterpreted from Sogdia, the ancient east Iranian land of Suguda, as it is called in the Persian Achaemenid inscriptions of the 6th century B.C., and later known to the Romans as Sogdiana. Centered on present-day Samarqand in what is now Uzbekistan, Sogdia was the great intermediary between East and West. Large Sogdian settlements within China played the lead role in the elaboration of a hybrid art of which the set is a remarkable example. The ewer acquired by Sackler from J. T. Tai & Co. "prior to 1975" had obviously reached the West before 1970 — few objects left China during the turmoil of the Cultural Revolution — and, by inference, the jar as well, although Sackler apparently bought the two objects separately and miraculously reunited them. At $21,250, just below the high estimate of $18,000 plus the 25 percent fee, the set was a steal.

Another rarity followed, and here bidders were more alert. A squat rounded pot of the 8th or early 9th century had an extremely unusual pattern simulating a bowl with a fitted cover in the form of a more shallow bowl turned upside down, a particularity that was not mentioned in the catalogue. On the cover a lotus chalice pattern, often found on the underside of bowls, emphasized the concept of a vessel turned upside down. It strongly contrasted with the motif of white flakes on green ground on the lower section of the jar, and, as if to make the division between the simulated cover and the lower section crystal clear, two deeply incised lines separated them at the transition. This jar too was included in the 1965 Columbia University exhibition, mentioned earlier. The estimate, $3,000 to $5,000, totally disregarded the rarity of the object, which ended up at $32,500. Even so, it was a great buy.

For collectors in search of the unique, nothing equaled a cizhou high-shouldered vase of the 14th century, with a short narrow neck of the type called meiping. Painted in sepia on ivory ground (the usual colors of cizhou wares), two groups of two standing figures facing each other, staffs in hand, stood out on the otherwise undecorated ground, framed on all sides by sepia bands. The figures were dashed off with a freedom heralding the brisk strokes of the so-called Individualist painters in the 17th century. No other vase with such tableaux, possibly inspired by murals, has been recorded. Arthur Sackler had bought the meiping in 1966 from the New York gallery Warren C. Cox Associates. Again the estimate, $3,000 to $5,000, bore no relationship to the importance of the vessel. At $11,875, it was a giveaway.

Not so the magnificent vase, also a meiping, that came next. The architecture of the shape, more fully rounded and much more powerful, was typical of Northern Song art at its greatest in the 11th or 12th century. The vigor of the form was matched by the extraordinary boldness of the carved pattern of huge peony blossoms and stylized leaves carried by curving stalks painted in sepia brown on the off-white ground. At $134,500, slightly more than the upper end of the estimate, this masterpiece from one of the greatest periods of Chinese ceramic art was worth every penny. I would have gladly run away with it.

One of the greatest objects of the day would have left me more hesitant. Figural carved lacquer of the 13th to 14th centuries ranks among the great achievements of China. Japan greatly admired it — and in turn created masterpieces derived from it, with an added thrust typical of Japanese aesthetics. On March 19th, a red lacquer dish carved with two ducks in flight amidst blossoms had explosive force.

Christie’s ascribed the masterpiece to the Yuan dynasty, which ruled China from 1279 to 1368. Is it really Chinese? Perhaps. However, the lacquer piece was consigned from Japan. True, a dish with an identical pattern carved in black lacquer is in the British Museum, where it is also called Chinese. But that merely invites the question about the second piece too — both clearly originated in the same workshop. Never mind: In the art lover’s eyes, the question of national provenance counts for relatively little. What matters a great deal is condition. Multiple cracks raise serious conservation problems. Had it not been so, it would have made a lot more than the $146,500 it fetched. I would most probably have found its beauty irresistible, and then spent months marveling at the folly of ignoring its fragility". By Souren Melikian "The Gems I Would Have Taken Home" originally appeared in the July/August 2009 issue of Art+Auction. For a complete list of articles from this issue available on ARTINFO, see Art+Auction's July/August 2009 Table of Contents.

Commentaires sur Souren Melikian, "The Chinese Gems I Would Have"