From a Neoclassical vase and about 18th century Wedgwood black basalt

From a Neoclassical vase and about 18th century Wedgwood black basalt Note: Black basalt was a form of stoneware developed by Josiah Wedgwood in 18th century England. The name derives from the color black and the prevailng taste for Grand Tour, neoclassical objets and art. Notes : The print source for these vases is P. F. d'Hancarville, Collection of Etruscan, Greek and Roman Antiquities from the Cabinet of the Honble William Hamilton, published in Naples in 1766-7. The subject of the krater vase is Hippothon, Antiochus and Clymenos, taken from the left hand side of plate 129 of volume I of the 1776 edition, used for the decoration of Wedgwood & Bentley's First Day's Vases. 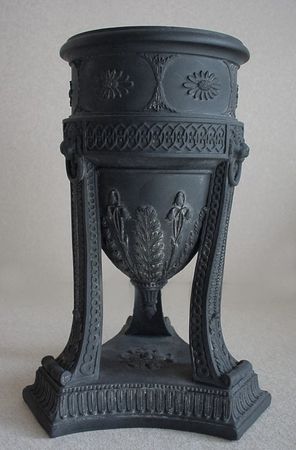 Old Wedgwood.
Among collectors the term Old Wedgwood is taken to refer to wares produced before Josiah's death in 1795. Old Wedgwood is difficult to date. The first examination is of the piece itself. Old Wedgwood has a character of its own. It is finely crafted and just feels old. It is impossible to convey that quality in either words or photographs. The only way to gain an appreciation of the character of Old Wedgwood is to examine it, with the eye and with the finger tips. Take every opportunity to do so at shows and auctions.

The Potters Mark.
The next recourse is to the mark. Josiah started marking his production with his name in about 1759, impressing the name into the underside of the article with printer's movable type. The resulting mark was often uneven and sometime arced. In about 1769 he adopted the familiar mark with the name impressed from a single slug. the WEDGWOOD mark is found on useful wares between 1769 and 1781 and on all wares produced thereafter until the sans serif version of the mark was introduced in 1929.

THE LETTER/NUMBER CODES.
In 1860 the Wedgwood factory started marking its wares with the date of manufacture impressed in each piece as part of a three letter code. The first letter of the code represents the month of manufacture, the second identified the potter who threw the shape and the last letter signifying the year the piece was made starting with 0 for 1860. The series was repeated 4 times. From 1907 on in the third series the first letter for the month is replaced by a 3 and with the fourth series commencing with A in 1924 with the figure 4. There is an area of confusion in wares in the first two series. For example TOT could mean a piece produced in either June 1865 or June of 1891. Commencing in 1929 the year mark is replaced by th last to digits of the year, 30 standing for 1930.

February, April, September, October, November and December are always show by their intial letter. June is always T and August is always W. In 1860-1863 March is M, May is Y and July is V. In 1864 March becomes R, May is M and July is L. In 1871 Wedgwood adopted pattern numbers with the code letter prefixes. I bought a small Queens Ware creamer at a flea market thinking from its style and shape to be quite old has the pattern number A1820 on its bottom. The impressed marks are badly filled in with the glaze and are almost obscured. The last figure in the three letter code is probably an O and the first two letters are impossible to read. Since the prefixed code was not introduced until 1871 I date the piece at 1886. www.thepotteries.org