LONDON.- Sotheby's London biannual sale of Fine Chinese Ceramics and Works of Art, which will take place on Wednesday, November 4, 2009 will present over 250 lots, comprising an important range of sculpture, ceramics and works of art in the wide variety of styles and media for which Chinese works of art are renowned.

Robert Bradlow, Head of Sotheby’s Chinese Ceramics and Works of Art Department, London, said: “In the wake of recent exceptional prices for rare Chinese works of art at Sotheby’s autumn series of sales in Hong Kong, Sotheby’s is delighted with the group of objects we have been able to assemble for sale in London. An Imperial Khotan-Green Jade Seal and a Large Grey Jade Water Buffalo have a similar aesthetic appeal and quality to the objects which were enthusiastically competed for in Hong Kong, and are among an exciting array of porcelains and works of art that we expect will attract old and new collectors alike.”

One of the most important objects in the forthcoming sale is A Massive Imperial Khotan-Green Jade Seal, Qing Dynasty, Qianlong Period (lot 136). Estimated at £400,000-600,000, this superbly carved square seal surmounted by a pair of dragons bears the inscription bazheng maonian zhibao, or ‘treasure of the 80-year old who concerns himself with the eight signs’. It was made for the 55th year of the Emperor Qianlong’s reign, his 80th birthday year. The seal would have been one of several produced to commemorate the birthday, but is the largest recorded of its type. One similar work was offered by Sotheby’s Hong Kong on October 8, 2009, from the Estate of Emile Guimet. The dragons in this example are powerfully carved with eyes bulging and nostrils flaring above jaws bearing sharp teeth; the stone is of a deep fern green with natural veining.

The auction is also set to include A Finely Carved Large Grey Jade Water Buffalo, 17th Century (lot 89). The reclining water buffalo is a classic motif in Chinese iconography, a symbol of strength and tranquillity evocative of a simple and bucolic life in the countryside. Animal sculptures created for pleasure rather than for ritual or burial are extremely rare in any medium in China. The present piece dating to the 17th century is notable for its naturalistic rendering, with the textured rich grey colour of the stone evoking the animal’s fur coat and the russet staining of the stone to the top of the head draws attention to the facial features. Comparable figures carved from spinach-green jade are known from several fabled collections; these include the Jacob Goldschmidt buffalo, the Oscar Raphael buffalo (now in the Fitzwilliam Museum, Cambridge), the Baron Lionel de Rothschild buffalo and the Alexander Ionides buffalo. The example offered for sale is estimated at £300,000-500,000. A fine example of cloisonné enamelling is represented by A Large Imperial Cloisonné Enamel Vase, Qing Dynasty, Qianlong Period (lot 149). While cloisonné vessels of this type are known from the Ming and Qing periods, the present piece is unusual for its facetted hexagonal form. Vases of this shape have their origins in archaic ritual bronze zun vessels of the Shang period; however, the Qing craftsmen made liberal changes to the prototype by adding their own design elements, resulting in pieces that were contemporary and unique. The Qianlong emperor was an avid collector of objects that were modelled after relics from antiquity and pieces such as this vase would have satisfied his individual taste for the old and new. The vase offered for sale is estimated at £40,000-60,000. The only other similar example known, was sold at Sotheby’s in October 1960 from the T.B. Kitson Collection, which reputedly came from the Yuan Ming Yuan Palace – the summer residence of the Qianlong Emperor. 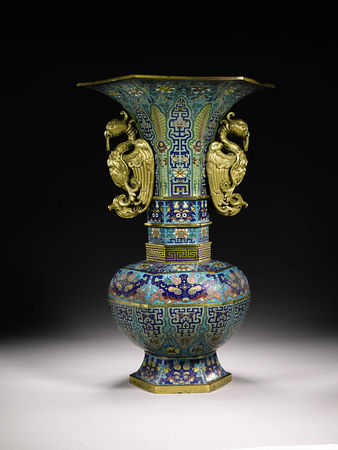 A Large Imperial Inscribed Carved Lacquer Panel, Qing Dynasty, Qianlong Period (lot 123) is a fine example of the exceptional workmanship achieved by lacquer carvers of the Qianlong period. Meticulously detailed with each figure carefully executed, the panel depicts eight luohan figures, monks who had attained sainthood through diligent study and good deeds. The landscape setting has a symbolic reference with the fruiting peach tree laden with large juicy peaches, a symbol of longevity, and the five pine trees representing wisdom, steadfastness and self-discipline. The present panel is well preserved, with only a small number of related examples of the type extant today, and is estimated at £80,000-120,000. The sale will include An Underglaze Blue And Yellow Enamel Dragon Dish, Kangxi Mark And Period (lot 126), of exceptional provenance. This Qing Dynasty piece was part of the Swedish collection of Emil Hultmark, a member of the ‘China Committee’ in Stockholm with other renowned collectors, such as King Gustave VI Adolphe and Karl Kempe. It was previously loaned to the Ashmolean Museum in 1907 by the English collector F. C. Harrison. The dish is estimated at £30,000-50,000. 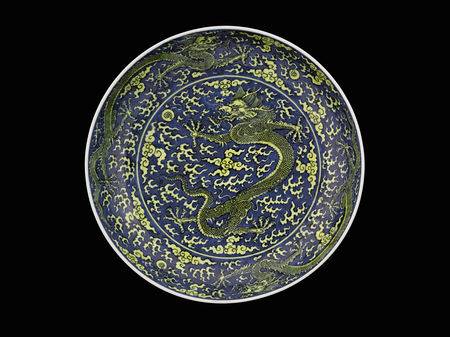 Another important work in the auction is A Large Parcel Gilt Bronze Figure of Kalachakra, Qianlong Mark and Period (lot 215). Kalachakra, also known as the yidam or tutelary god of the ‘Wheel of Time’, was worshipped in Tibet and Mongolia during Qianlong’s reign. Considered one of the most complex of all the supreme tantra deities, Kalachakra would be called upon in times of crisis and become a protector often assigned to a monastery, family or individual. Kalachakra is most commonly represented in his peaceful form, wearing jewels and crowns of a bodhisattva and depicted in an embrace with his female counterpart or shaktis. The Qianlong emperor was a devout Buddhist and a keen follower of Tibetan Lamaist teachings. He had gilt-bronze sculptures of the many deities of the Tibetan Buddhist Pantheon made in the Palace Workshop as gift items to the Tibetan hierarchy or to be placed in the numerous Buddhist shrines built within the Foreign City compound. The example offered for sale is estimated at £80,000-120,000. Property Of Baron Hastings Removed From Seaton Delaval Hall The sale will include selected pieces from Seaton Delaval Hall, a theatrical English baroque masterpiece built in Northumberland between 1718 and 1728 for Admiral George Delaval. Chief among these is a magnificent Pair of ‘Famille Rose’ Soldier Vases and Covers, Qing Dynasty, Qianlong Period, estimated at £80,000-120,000 (lot 239). In 1783 this pair of monumental vases was noted in the Inventory of Household Furniture belonging to the Right Hon. Lord Delaval, whose house on Hanover Square contained a number of pieces of Chinese porcelain. Acquired for 30 guineas in 1778, the vases were described at the time as ‘remarkable for their size and beauty’. Of elegant form and finely enameled decoration, the present vases display the technical virtuosity of potters and painters of the Qianlong period. A further highlight from Seaton Delaval Hall is a pair of Large ‘Famille-Verte’ Dishes, Qing Dynasty, Kangxi Period (lots 205 and 206). Comprising two separate lots, the dishes are elaborately painted in mirror-symmetric counterpart to each other and estimated at £15,000-20,000 each. 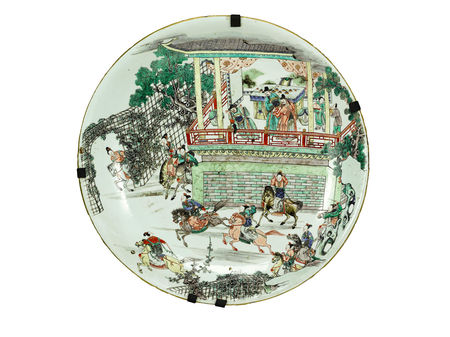