The collection was formed during the 1950s and 60s by a Greek lady in the privileged environment of a well known Athenian family, who similarly to other prominent Greek families of the period, participated in international shipping as well as being pioneers of the Greek textile industry. Pictures of the period show her as a beautiful young woman, who supported her family's social and business standing, creating several beautiful homes, with the family's main residence just opposite the Greek Royal palace. The family was frequented by the Athenian as well as European aristocratic circles. Frequent visits to London and Paris, where the family owned an apartment, enriched the Chinese art collection, purchased from leading London dealers such as John Sparks, Spink & Son, S. Marchant & Son, William Clayton, Frank Partridge & Sons, H.R. Hancock & Sons, and in Paris L. Wannieck and C.C.E.O. The collection as a whole and when studied individually is a testament to the enduring refined taste and wonderful eye of the collector. 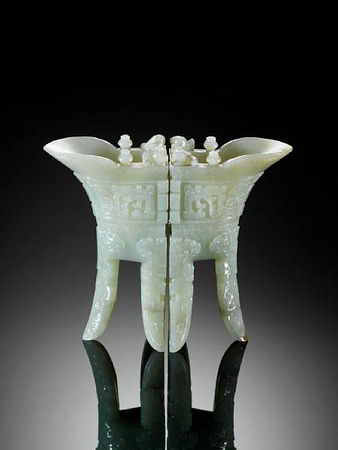 Inspired by the shape of archaic bronze vessels, each jue cup superbly carved in relief with two friezes enclosing stylised confronted dragon and phoenix divided by flanges, the reverse with a taotie mask, all framed by foliate scrolls, the walls rising to the flared spouted mouth rim surmounted by mushrooms, raised on three blades carved with taotie masks, the flat-back vessels when positioned back to back forming the illusion of a double-spouted jue vessel, the stone of pale green tone with minor russet inclusions, wood stands. 13cm (5⅛in) high. (4). Estimate: £80,000 - 120,000, HK$1,000,000 - 1,500,000

Footnote:: Provenance: a Greek private collection, Athens, formed in the 1950s/60s and thence by descent.

Archaic-bronze-inspired jade jue vessels of the Qianlong period are extremely rare. Only one other example, a pair of nearly identical form but with a six-character Qianlong fangu mark, now in the Fitzwilliam Museum, Cambridge, appears to have been published. The 'Fitzwilliam' pair of white jade jue vessels was given by Sir Percival David to his close friend, Oscar Raphael, the principal benefactor of the Fitzwilliam Museum's jade collection, and was later bequeathed to the museum in 1941. See J.C.S.Lin, The Immortal Stone: Chinese Jades from the Neolithic Period to the Twentieth Century, The Fitzwilliam Museum, Cambridge, 2009, Catalogue no.79, where the author notes that the Museum's pair is the best example in the Museum's collection of jade vessels inspired by archaic bronzes.

The Qianlong Emperor advocated restoration of the ancient ways and suggested jade craftsmen should turn to antiquity for models. This was not simply a return to previous aesthetics but a view of ancient culture as being imbued with intrinsic qualities of sincerity, simplicity and happy exuberance; see L.Chang, The Refined Taste of the Emperor: Special Exhibition of Archaic and Pictorial Jades of the Ch'ing Court, National Palace Museum, Taipei, 1997, pp.49-50.

We would like to thank Dr Lin, Fitzwilliam Museum, for permitting us to compare the jue vessels and for providing provenance information about the 'Fitzwilliam' pair of jade jue vessels. Each carved in the form of a facetted double-gourd vase carved with the characters 'Da Ji' and flanked by ring handles, supporting a shou medallion below two bats with wan emblems, their wings spread and holding a lingzhi fungus in their mouths, all below a double gourd supporting the gilt-bronze sconce decorated in openwork with lotus scrolls, all supported on a barbed-rim quatrefoil tray raised on ruyi-head shaped legs. Overall 22.3cm (8¾ in) high. (4). Estimate: £15,000 - 25,000, HK$190,000 - 310,000

The present lot is rare for its particular form combining auspicious emblems heavy with symbolism. Each candlestick is carved with the characters 'Da Ji' forming the wish for Great Fortune. The characters are carved on a large double gourd, symbolising longevity, a wish further reinforced by the additional double gourd below the sconce as well as the shou character and lingzhi fungus. The combination of a wan symbol on a pair of bats, wanfu, above a linghzi fungus and shou character is a pun for 'May you possess ten thousand blessings and longevity'. Each vase of flattened form, flanked by dragon handles, suspending loose rings, the first carved with a sage and attendant by a riverside with sampans, the second with a sage crossing a bridge, all in a mountainous river landscape strewn with pagodas, pine, willow and paulownia trees, the domed cover with a Buddhist lion finial and carved with a pagoda and sampan in a mountainous river landscape, the stone of grey-green tone with dark-honey coloured inclusions, stands. Including cover 33cm (13in) high, without cover 25cm (10⅞in) high. (5). Estimate: £6,000 - 8,000, HK$75,000 - 100,000 Carved in the form of a hollowed horn decorated with two registers of C-scrolls parted by a narrow plain border, all emanating from the jaws of a chi-dragon, with its curled tail forming the handle opposite the high relief snout and horns, the stone of grey tone with minor russet inclusions, stand. 14cm (5½in) high. (2).Estimate: £5,000 - 8,000, HK$63,000 - 100,000

Jade vessels of this type appear to be based on Han Dynasty prototypes such as the jade rhyton from the tomb of the King of Nanyue, illustrated by P.Y.K.Lam, ed., Jades from the Tomb of the King of Nanyue, Hong Kong, 1991, pls.101-105. The archaic inspiration is apparent in the general form, as well as in the curled bifurcated tail and C-scroll patterns. Compare a related grey green rhyton dated as Ming Dynasty illustrated by S.C.Nott in Chinese Jade Throughout the Ages, Rutland, Vermont, 1962, pl.XXXIV; and another related jade rhyton, carved with two chilong dragons, dated as Song/Ming Dynasty, sold at Christie's New York, 19 September 2007, lot 60. Provenance: purchased from John Sparks Ltd., London, on 13 December 1956 for £200
A Greek private collection, and thence by descent Carved in the form of an upright double vajra, the cylindrical section carved at the centre with convex vertical ribs between a key-fret band and a fluted border, the top section with five openwork phoenix flanges, supporting the circular perfumier box and cover with a pierced chrysanthemum medallion, the lower section with five openwork dragon flanges resting on a spreading five-sided base carved in low relief with a trapezoidal key-fret pattern. 29cm (11⅜in) high. (2). Estimate: £3,000 - 5,000, HK$38,000 - 63,000

Provenance: purchased from Spink & Son on 13 December 1956 for £155
A Greek private collection, and thence by descent

The present lot is unusually carved solely from jade following the form of the Buddhist vajra, and would have most probably been used by a high ranking Court official at the Imperial Court.

Hatstands were used in the Imperial Court to support the ceremonial hats and to perfume them by scents placed in the perfume box. For an example of a ceremonial hat, see the Qianlong Emperor's winter court hat from the Palace Museum, Beijing, illustrated by E.S.Rawsky and J.Rawson, eds., in the Royal Academy exhibition catalogue China: The Three Emperors 1662-1795, London, 2005, p.72, fig.4. 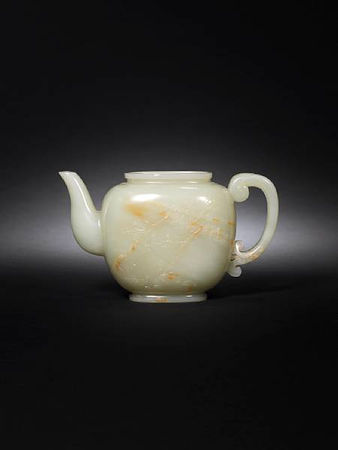 The well-hollowed ovoid vessel carved with a leaf shaped strap handle opposite the curved spout, with a short galleried oval rim, supported on a spreading oval foot, finely carved on both sides with a gnarled prunus tree growing amidst rockwork and grass, the stone of pale green yellowish tone with russet inclusions, stand. 19.8cm (7¾in) wide. (2). Estimate: £2,000 - 3,000, HK$25,000 - 38,000