'Gods, Love, and War: Tapestries and Prints from the Collection' @ Carnegie Museum of Art

'Gods, Love, and War: Tapestries and Prints from the Collection' @ Carnegie Museum of Art Highlighting a selection of six large-scale tapestries dating from the 16th and 17th centuries and 40 prints from Carnegie Museum of Art’s collection, the exhibition explores the historical popularity of tapestries as well as the patrons, artists, and studios that created the taste for tapestries.

The tapestries on view are:

• Alexander Entering Babylon in Triumph, from The Life of Alexander, designed in 1665 and woven in 1691.

• The Defeated Pompey Meeting His Wife at Sea, from The Story of Julius Caesar, designed in 1540 and woven in Brussels in 1640.

• The Triumph of Hope, from The Triumphs of the Seven Virtues, made circa 1530 in Brussels.

• The Holy Family Attended by Angels, designed in the early 16th century in Brussels, and made with wool, silk, and gilt-metal-wrapped thread.

• Winter and Autumn, both from The Seasons of Lucas, woven in the late 17th century at the Gobelins Manufactory in Paris.

“The ideas dramatized in these monumental pictures—religious, historical, or mythical—not only glorified their owners, but also reflected and reinforced the artistic, political, and social values of the age,” said Lucy Stewart, organizer of the exhibition and assistant curator of education at Carnegie Museum of Art.

A select number of prints will be exhibited alongside the tapestries and will depict many of the same themes. Masterworks on view include prints by Albrecht Dürer, Andrea Mantegna, Pieter Brueghel the Elder, and others. A new set of prints will go on display halfway through the run of the six-month exhibition. The galleries will also feature an area devoted to the technique of tapestry weaving, where a small modern vertical loom will be used to demonstrate intricate tapestry weaves.

The museum formerly exhibited tapestries in the Ailsa Mellon Bruce Galleries before the galleries were closed in 2001; the renovated galleries reopened in November 2009 with a new installation of decorative arts objects. While the galleries were closed, The Triumph of Hope, a 14-by-18-foot Flemish work, underwent restoration at the renowned Textile Conservation Laboratory at the Cathedral Church of St. John the Divine in New York City. The tapestry was cleaned in the lab’s custom 16-by-20-foot washbasin, and several centuries of dust, soot, and stains were removed. Missing and weak fibers were replaced by hand using color-matched thread while leaving intact other meticulously made repairs, some dating back as far as 400 years ago. Additionally, both The Holy Family Attended by Angels, and The Defeated Pompey Meeting His Wife at Sea underwent restoration by Textile Conservation Services of Washington DC.

Gods, Love, and War: Tapestries and Prints from the Collection will be on view until June 3, 2010, in the Heinz Galleries.

In addition to Gods, Love, and War, the museum will present a second complimentary decorative arts exhibition entitled The Artistic Furniture of Charles Rohlfs to celebrate the reopening of the Ailsa Mellon Bruce Galleries. Opening on January 30, 2010, the exhibition highlights Rohlfs as one of the most skillful, albeit enigmatic, American furniture makers of the late 19th and early 20th centuries. He drew inspiration from varied sources, including Japan, China, the Middle East, and medieval and Renaissance Europe, resulting in a rich assortment of tables, chairs, chests, and candlesticks, all distinguished by the quality of their hand-craftsmanship. 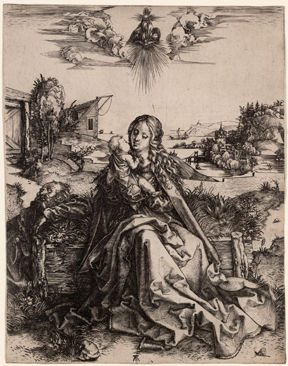 Flemish, Brussels, The Triumph of Hope, from The Triumphs of the Seven Virtues,c. 1530, wool. Gift of the Hearst Foundation, Inc., 54.6.1