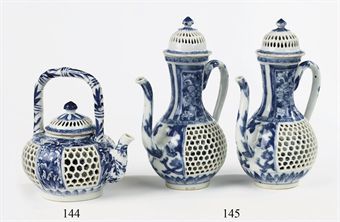 Decorated to the centre with five equestrian figures armed with swords and spears in full gallop, surrounded on the well and rim with panels of birds between branches of prunus and hydrangea on a wave-pattern ground, all within a narrow zigzag-pattern border at the rim, some small rim chips, frits - 37.2 cm. diam.  Price Realized €4,750 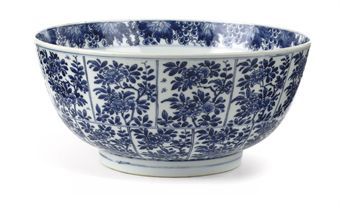 Painted to the exterior with a double row of panels with flowering branches of peony, the interior with a large roundel of peony-sprays below a band of vine at the rim, small superficial chips - 31.5 cm. diam. Price Realized €3,750 Painted with three large panels of prunus, peony and chrysanthemum, between ruyi-shaped panels including flower-scrolls on a washed-blue ground, all below two bands of flower-heads on the shoulder and foot, the cover broken and re-glued - 38 cm. high - Price Realized €3,750 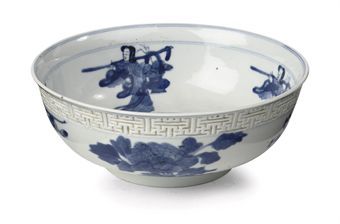 Painted to the exterior with sprays of prunus, chrysanthemum, lotus and peony, below a half-openwork keyfret border encircling the rim, the interior with moulded central panel surrounded by a band of symbols, four figures in flowing robes carrying flower-baskets at the well, minor rim frits - 19.2 cm. diam. Price Realized €3,000 Painted to the exterior with a continuous scene of ladies and boys in a fenced garden landscape, the interior roundel decorated with three boys at play, below a diaper-pattern rim reserved with four floral cartouches, minor rim chip - 20 cm. diam. Price Realized €2,375 Comprising a set of six 'floral' saucer dishes moulded with wavy rim, 20.5 cm. diam.; a moulded dish painted to the central roundel with figures on a boat-trip, 26 cm. diam.; and an octagonal dish with radiating panels of a solitary figure in a river-landscape alternated with floral panels, Xuande mark, 27.8 cm. diam., minor frits, chips and hairline cracks (8) Price Realized €1,875 Decorated with the well-known scene known as the 'acupuncturist', showing a half-clad couple on a blanket below a willow-tree, the well moulded with a row of petals, below a keyfret-pattern band at the shaped rim, the reverse with floral panels, chips, frits and hairline cracks - 11 cm. diam. (6) Price Realized €1,625

Painted to the central roundel with a seated lady, surrounded by radiating ladies, the cups painted with Long Eliza's alternated with flower sprays, minor chips and hairlines (24) Price Realized €1,500 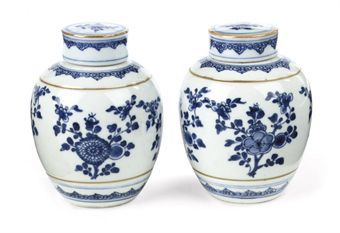 Decorated to the globular sides with sprays of prunus and chrysanthemum, the circular flat covers painted with a flower-branch, the rims glazed brown, the cover, shoulders and footring decorated with a band of ruyi-heads, small hairline crack - 14.5 cm. high (2) Price Realized €1,375 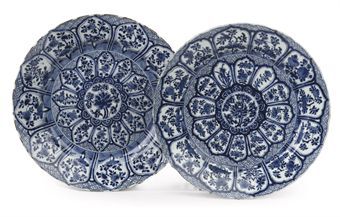 Both painted with a central lotus flower surrounded by a band of ruyi-heads enclosed by radiating panels including flowers, the rim decorated with radiating lappet-shaped panels of peach, peony and chrysanthemum, rim frits, one dish with rim crack - 38 and 39.5 cm. diam. (2) Price Realized €1,250