A further highlight is a group of four works from a Private French Collection which have been in the possession of the current owners for the last 60 years, three of which will be exhibited in public for the first since the 1960s. This group is led by Mademoiselle Grimprel au ruban rouge, an important portrait by Pierre-Auguste Renoir (1841-1919) (estimate: £1.8 million to £2.5 million).

We saw a consistent demand throughout 2009, coupled with a significant drop in the levels of supply; however, during the last 6 months of 2009, there has been a noticeable uptake with a continuing growth in confidence from consignors. The auctions in February will offer a selection of works which represent over 100 years of art and a broad range of important artistic movements, and we look forward to welcoming collectors to the first major international auctions of the new year.”

Impressionist and Modern Art Evening Sale
The Impressionist and Modern Art Evening Sale will offer 48 lots with a total pre-sale value of £48,320,000 to £69,110,000. Led by Gitane by Kees van Dongen (1877-1968) (estimate: £5.5 million to £7.5 million), the auction will also include works by other leading artists of the field including Claude Monet, Henri Matisse, Pablo Picasso, Vincent van Gogh, Pierre-Auguste Renoir and Edvard Munch, among others.

- Gitane, circa 1910-1911, by Kees van Dongen (1877-1968) is a striking portrait by the Dutch artist which was executed at one of the most important periods of his career. Having signed a contract with Bernheim-Jeune and moved into a new studio space, Van Dongen found financial security and was able to travel extensively for the first time in 1910. From Paris he visited family in Holland before travelling to Italy, Spain and North Africa. Always having been fascinated by the cultures of these foreign lands, this direct experience was to have a profound effect on the artist and prompted one of the most fruitful periods of his career. The present work encapsulates the energy, excitement and creativity that struck Van Dongen at this time, and shows the Spanish subject with a sensual face and with blazing, vivid colour. Offered at auction for the first time by a distinguished European family, it is expected to realise £5.5 million to £7.5 million. 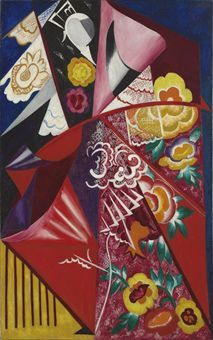 - Espagnole, circa 1916, by Natalia Goncharova (1881-1962) will also be offered at auction of the first time having been in the ownership of a private Swiss collector since the early 1980s. In June 2008 the artist’s Les fleurs sold for £5.5 million, establishing a world record price for any painting by a female artist sold at auction. Cubo-Futurist works executed by the artist in the 1910s are extremely rare and very sought after by the most sophisticated international collectors. Espagnole is a spectacular picture executed during the First World War, and is an outstanding example from a series which saw Goncharova merge painting and theatre design - the two disciplines for which she is best known. The painting offers an exceptional fusion of the artist’s avant-garde and her much celebrated work for Sergei Diaghilev’s Ballets Russes. The work will be exhibited to the public for the first time since 1971 at Christie’s from 20 January to 2 February, and is expected to realise £4 million to £6 million. - Tête de femme (Jacqueline), 1963, by Pablo Picasso (1881-1973) is a portrait of the artist’s second wife whom he had married two years earlier in 1961. Jacqueline became a regular model for the artist who had by this time become internationally famous; she was an instrumental figure in protecting him from the increasing demands of his fame and reputation. The couple lived a charmed life at Notre-Dame-de-Vie, a large villa by Mougins that would provide his home for the rest of his life, and she became the most important of all his Muses and models. The present portrait has never before been offered at auction and has been in the same collection since 1981. Jacqueline had a very short neck and it is said that Picasso would often humorously exaggerate its size in his portraits. It has been unseen in public since 1967 and is expected to realise £3 million to £4 million. 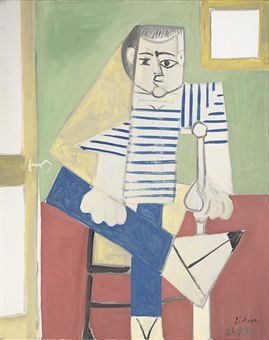 - Homme assis sur une chaise, 1956, by Pablo Picasso (1881-1973) is an imposing portrait painted soon after the artist had escaped the great attention that he was attracting in Paris and had moved to La Californie, a spacious villa overlooking Cannes. This was also the period midway between Picasso’s first two great series on earlier masters; those on Delacroix’s Femmes d’Alger and the sequence based on Velazquez’s Las Meninas. Settled at his new home, it did not take long for the proximity of the sea to have an influence on Picasso’s work, and the present portrait shows a subject with traditional fisherman’s shirt, and with a fisherman’s rugged features. It is expected to realise £3.5 million to £5.5 million. - Nu aux jambes croisées, 1936, by Henri Matisse (1869-1954) is offered at auction for the first time having been in the same Swiss Collection since 1963. An important, rarely seen work, it will exhibited to the public for the first time since 1951 at Christie’s from 20 January to 2 February. The painting was executed in 1936, near the beginning of the incredibly close relationship that Matisse shared with Lydia Delektorskaya who was a Muse, model, studio assistant and occasional confidante of the artist. During the early 1930s Matisse had created relatively few easel works and from 1935 he entered an important period of invention as he digested and condensed a range of new ideas and influences. Nu aux jambes croisés is expected to realise £2.5 million to £4 million. The auction will offer a group of four works from a Private French Collection which has been in the possession of the current owners for the last 60 years, three of which will be exhibited in public for the first since the 1960s. This group includes Mademoiselle Grimprel au ruban rouge, 1880, an important work by Pierre-Auguste Renoir (1841-1919) which dates to the highpoint of the artist’s portrait painting. Exhibited twice during the artist’s lifetime, it portrays Hélène Grimpel, the granddaughter of Armand Grimpel, a wealthy banker who became a great patron of the artist (estimate: £1.8 million to £2.5 million). Vase au guerrier japonais by Odilon Redon (1840-1916), an outstanding pastel of monumental size, is expected to realise £1.8 million to £3 million; Les courses, Longchamp (triptyque), 1897, by Pierre Bonnard (1867-1947) carries an estimate of £700,000 to £1,000,000; Intérieur aux rocking-chairs, 1902, by Edouard Vuillard (1868-1940) which is estimated to realise £250,000 to £350,000. Coinciding with the exhibition The Real Van Gogh; The Artist and His Letters at The Royal Academy from January 2010, the sale will offer two works by the celebrated Dutch artist; Six Pines near the Enclosure Wall, 1889, a mesmerizing drawing of trees that was executed while he was committed to the asylum of Saint Rémy de Provence which is expected to realise £600,000 to £800,000; and The Iron Mill in The Hague, an early landscape painted in 1882, which carries an estimate of £450,000 to £550,000. Since 2001, Christie’s have dedicated a section of the February evening sale to surrealist art. The Surrealist movement was founded in France in 1924 with the publication of Manifeste du surréalisme by the writer André Breton, its founder and chief spokesman. He stated that the central idea was ‘to resolve the previously contradictory conditions of dream and reality into an absolute reality, a super-reality.’ Major artists associated with the Surrealist movement include René Magritte, Salvador Dalí, Max Ernst, Giorgio de Chirico and Francis Picabia, all of whom are represented in the sale.

Olivier Camu, International Director and Head of Sale: “This is the 10th annual sale of Art of the Surreal and we continue to be the only international auction house to hold auctions dedicated to this area. In the last 5 years in particular, we have seen a notable increase in interest and value for Surrealist art, particularly due to the appreciation that has attracted from collectors of Contemporary art; an ever-increasing group of collectors have made this a vibrant collecting category.” Le triomphe de Tourbillon, 1943, by Salvador Dalí (1904-1989) is one of an important group of paintings executed by the artist in the mid-1940s on the theme of obscure allegories that fuse barren landscapes, classical motifs and dancing nudes into wondrous fantasy scenes, all rendered in the manner of stage-sets for ballet. Two similar examples can be found in the Dalí Museum in St. Petersburg, Florida. Offered at auction for the first time since 1988, it is expected to realise £600,000 to £900,000. Profanation of Spring, 1945, by Max Ernst (1891-1976) is a richly detailed and bizarrely animated painting prompted by the artist’s fascination with the natural environment. It is expected to realise £700,000 to £900,000. Le tambour major de l’armée céleste, 1970, is a large scale work by the artist which illustrates his developing fascination with cosmology. Offered at auction for the first time, it is expected to realise £400,000 to £600,000.