HAI DUONG, VIETNAM (AP).- One of the flamboyant entrepreneurs making it big in booming Vietnam unveiled a massive precious stone on Monday that he plans to transform into the world's largest jade Buddha.

Dao Trong Cuong, the owner of a Vietnamese gem mine, purchased the 35-ton stone in Myanmar last year for $2 million and imported it to Vietnam in October. By the time a team of 50 artists and sculptors finishes chipping away at it, the finished Buddha is expected to weigh nearly 20 tons.

Cuong counts some of Vietnam's most powerful political figures among his friends, including President Nguyen Minh Triet, who spoke at Monday's ceremony after about 250 monks in saffron robes chanted and rang bells.

"This unique artistic work will be passed on to many generations," said Triet.

Triet pulled back a curtain covering the massive hunk of jade, which has been temporarily adorned with a painting of a tranquil Buddha sitting in the lotus position.

Cuong said it will take two years to complete the statue.

A search of the Guinness Book Web site showed no entries for the world's largest jade Buddha. But according to Vietnamese media reports, the world's biggest existing jade Buddha weighs 4 tons and stands 9 feet (2.7 meters) tall. It was taken on a tour of Buddhist temples in Vietnam and Australia last year.

Buddhism is the largest religious faith in Vietnam, a nation of 86 million where the government strictly controls religious organizations. While some Buddhist sects have been involved in high-profile conflicts with the government, the monks at Monday's ceremony belonged to the officially sanctioned Buddhist Church of Vietnam.

Like China, its massive northern neighbor, communist Vietnam has implemented market reforms in recent years that have unleashed rapid economic growth, which has averaged nearly 8 percent for the last decade. Once reviled by communist revolutionaries, millionaire businessmen are now seen as role models, creating jobs and developing the country.

Cuong struck it rich in Vietnam's late 1980s gemstone rush. Among his business ventures is a studio that makes artworks out of crushed gemstones, such as rubies and emeralds. He has made portraits of Vietnam's revolutionary hero Ho Chi Minh, former President George W. Bush and Bill Gates.

Cuong, 54, is not shy about displays of wealth.

He was among the first Vietnamese to purchase a Hummer, which cost him $300,000 to import from the United States. 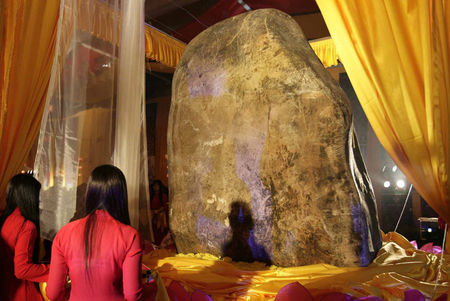 Women look a the jade piece as it was unveiled on Monday, Jan. 18, 2010 in Hai Duong province, Vietnam. The jade imported from Myanmar measures 3 meters high, 2.15 meters wide and 2.2 meters deep and weighs 35 tons is seen as one of the world's biggest pieces of jade. Flamboyant entrepreneurs, Dao Trong Cuong, making it big in booming Vietnam, unveiled the massive precious stone on Monday that he plans to transform into the world's largest jade Buddha. AP Photo/Tran Van Minh