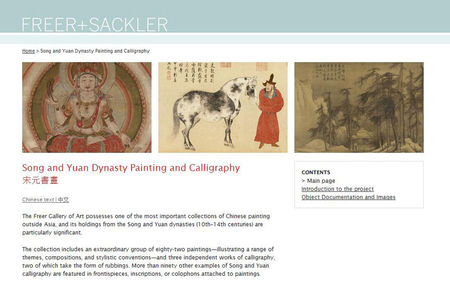 WASHINGTON, DC.- The earliest Chinese paintings in one of the most important collections in the West are now featured in a new public Web resource launched by the Smithsonian’s Freer and Sackler galleries. “Song and Yuan Dynasty Painting and Calligraphy” contains hundreds of images and comprehensive documentation of the Freer’s exceptional holdings of 85 works of Chinese brushwork from the 10th through the 14th centuries.

The culmination of years of research and preparation, the Web site comprises an unprecedented assemblage of documentary information presented in Chinese and English about the Freer’s collection of Song and Yuan paintings. Art historians and the larger scholarly community will benefit from the most comprehensive documentation ever assembled or published on these renowned works of Chinese art. The project aims to create a virtual catalog of the collection that can readily incorporate new documentation, scholarship and photography. This adaptability is intended to make the site a changing reflection of scholarly advances rather than a static record of current opinion.

The Web resource represents a particularly rich period in Chinese art, showcasing foundational Song and Yuan styles, themes and artists. Among the highlights of the collection are two 10th-century scroll paintings from the Buddhist caves at Dunhuang and the only surviving works by Chinese masters Yan Ciyu (active 1160s–80s), Li Shan (active late 12th–early 13th century) and Zou Fulei (active mid-14th century). The collection also includes three independent works of calligraphy and more than 90 other examples of exquisite brushwriting from the period that are attached to paintings in the form of frontispieces (texts that precede primary works of art), inscriptions or colophons (texts that were subsequently added to primary works of art).

Every work is fully documented with transcriptions of Chinese texts accompanied by annotated English translations. The format will enable users to simultaneously examine images of each work and all documents related to it, an advantage for study and scholarship.

“This is a tremendous new resource for the international scholarly community,” said Julian Raby, director of the Freer and Sackler galleries. “This is only the beginning. Our ultimate goal is to develop a technologically advanced way of looking at Chinese painting that will enliven the field and generate new scholarship.”

The new site represents 100 years of collecting: Charles Lang Freer (1854–1919) acquired his first Song painting in 1902 and the latest addition was made by the Freer Gallery in 2002. “Song and Yuan Dynasty Painting and Calligraphy” is available at: http://www.asia.si.edu/SongYuan/default.asp.