HUMBLEBAEK.- This spring’s major exhibition at Louisiana centres on colour: colour in art, in the world and in the eye. In words, pictures and through interactive programmes the exhibition will present the ways in which artists throughout the twentieth century either made use of colour as a medium of expression or researched it to find new colours and colour systems. Louisiana has been given a unique opportunity to choose freely from works in the Swiss Werner & Gabrielle Merzbacher’s rich collection, which was described in The New York Times in 1999 as “one of the world’s finest private collections of modern art”. The selection of the works has been made with colour as the point of departure, and along with a number of works from the Louisiana’s collection we are showing them in an exhibition about colour in art and the many discussions of colour over the years. The exhibition Colour in Art is a true cornucopia of colour; through some 150 masterpieces it reflects how about 80 artists have worked with colour, as well as their thoughts on the theory of colour. For more than a century artists all over the world have been intent on rendering the intensity of colour. They have researched and investigated colour, and this has led to brand new potential in painting. The great shift in the use of colour took place in Europe with the pictures of the Impressionists, when they moved their easels out into the open air and tried to create a particular impression: the momentary sensation of colour, light and air was converted into painting. The Impressionists worked to find an artistic expression of the intense registration of the passing moment. This revolutionary step out of the studios and the new view of colour continued throughout the twentieth century. The new perspective on the potential of colour was now unbounded and through the first half of the last century colour experiments in art flourished. 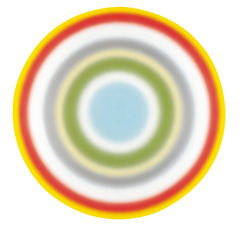 In the field of colour itself too there was a development that was important to the artists. New colours and paints appeared as in 1947 where the first acrylic paint was developed, which opened up new avenues. The new commercial colour charts also became an inspiration – as can be seen for example in the work of Gerhard Richter, Farbfelder Nr. 354, 1974.

Colours evoke associations which are culturally determined, and in the commercial world the strength and signals of the symbolically charged colours are used for example in logos, but it is quite another matter when it comes to the colours in art. Yves Klein’s blue is unlikely to evoke the UN, the EU or Nivea, and André Derain’s orange-tinged bay at Port de Collioure hardly imprints images of oranges or Buddhist monks on the retina. The paradox is, however, that the blue of the Nivea tin, the red of the Coca-Cola logo or the colour of oranges can evoke associations that make the viewer think of particular works of art. Our understanding of colours is influenced by the art and culture that surround us, and the exhibition shows how important a role colour has played for the artists and for us. 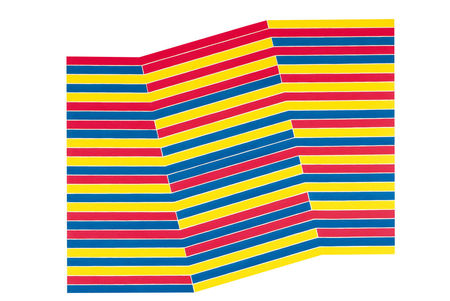