"To Live Forever" @ the Brooklyn Museum

"To Live Forever" @ the Brooklyn Museum BROOKLYN, NY.- Through more than one hundred objects drawn from the Brooklyn Museum’s world-renowned holdings of ancient Egyptian art, including some of the greatest masterworks of the Egyptian artistic heritage, "To Live Forever" explores the Egyptians’ beliefs about life and death and the afterlife, the process of mummification, the conduct of a funeral, and the different types of tombs—answering questions at the core of the public’s fascination with ancient Egypt. The exhibition will be on view February 12 through May 2, 2010.

One of the primary cultural tenets through thousands of years of ancient Egyptian civilization was a belief in the afterlife and the view that death was an enemy that could be vanquished. "To Live Forever" features objects that illustrate a range of strategies the ancient Egyptians developed to defeat death. It examines mummification and the rituals performed in the tomb to assist the deceased in defying death, and reveals what the Egyptians believed they would find in the next world. In addition, the exhibition contrasts how the rich and the poor prepared for the hereafter. The economics of the funeral are examined, including how the poor tried to imitate the costly appearance of the grave goods of the rich in order to ensure a better place in the afterlife.

Each section of the exhibition contains funeral equipment for the rich, the middle class, and the poor. The visitor will be able to compare finely painted wood and stone coffins made for the rich with the clay coffins the poor made for themselves, masterfully worked granite vessels with clay vessels painted to imitate granite, and gold jewelry created for the nobles with faience amulets fashioned from a man-made turquoise substitute. Objects on view include the "Bird Lady"—one of the oldest preserved statues from all Egyptian history and a signature Brooklyn Museum object; a painted limestone relief of Queen Neferu; a gilded, glass, and faience mummy cartonnage of a woman; the elaborately painted shroud of Neferhotep; a gilded mummy mask of a man, and a gold amulet representing the human soul.

Edward Bleiberg, Curator of Egyptian Art at the Brooklyn Museum, has organized the exhibition. He has authored the accompanying catalogue, which also includes an essay by the scholar Kathlyn M. Cooney; the catalogue is published by the Brooklyn Museum in association with D. Giles Ltd., London. The recipient of an M.A. and Ph.D. in Egyptology from the University of Toronto, Dr. Bleiberg is the author of several books and scholarly articles, among them the exhibition catalogues Jewish Life in Ancient Egypt and Tree of Paradise,both for shows at the Brooklyn Museum.

The Brooklyn Museum galleries of ancient Egyptian art contain more than 1,200 objects ranging from Predynastic times through the reign of Cleopatra. The collection, noted for its scope, artistic quality, and historical significance, was begun in the early twentieth century through Museum excavations and the support of collectors who donated works and entire collections. The collection of Charles Edwin Wilbour, formed in the nineteenth century and donated to the Museum between 1916 and 1947, and an endowment given by the Wilbour family in 1931, further strengthened the Museum’s holdings.

"To Live Forever" is organized by the Brooklyn Museum. Having traveled to four museums as part of a nationwide tour that began in the summer of 2008, the exhibition now comes back for a showing at its home institution. The tour will then resume, continuing through the fall of 2011 and taking the exhibition to an additional five venues. 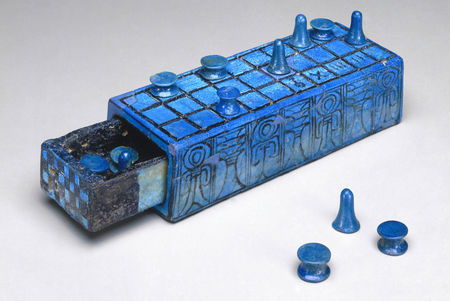