Louise Bourgeois, Give or Take (How do you feel this morning?), 1990

Louise Bourgeois, Give or Take (How do you feel this morning?), 1990 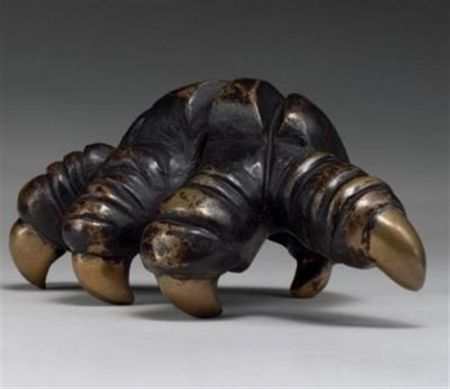 Animated and surreal, a disembodied claw perches on five spiked talons in this biomorphic sculpture by artist LOUISE BOURGEOIS. This work is part of a series of sculptures called “Give or Take”. Louise Bourgeois (b. 1911) is regarded as one of the most successful living female artists. Born in Paris, Bourgeois studied mathematics at the Sorbonne before switching to fine art at École du Louvre and École des Beaux-Art. In 1938, after marrying American art historian Robert Goldwater, she moved to New York to study painting at the Art Students League. Though influenced by European Abstract Expressionism, Bourgeois created symbolic objects expressing psychoanalytic themes that revealed the impact of childhood trauma on her art. In the late 40s she produced wooden sculptures, which gave way in the 1950s to works crafted with non-traditional media, such as latex and plaster. In the 1960s and 1970s her work became more sexually explicit, and she gradually received more attention as public attitude changed due to feminism and Post-modernism. She drew international attention at the Documenta 9 in Kassel in 1992 and the Venice Biennale one year later. In 1999, Bourgeois was the first artist commissioned to fill the Turbine Hall at the Tate Modern, which held a large retrospective in honor of her 95th birthday. Her work was also exhibited at the Centre Georges Pompidou in Paris, the Solomon R. Guggenheim Museum in New York, and the Museum of Contemporary Art in Los Angeles. In 1999 she was honored by the Japanese Art Association with the Praemium Imperiale. Louise Bourgeois lives in New York today.

Commentaires sur Louise Bourgeois, Give or Take (How do you feel this morning?), 1990