LONDON.- The exhibition features seven major international loans of paintings by Delaroche including 'The Princes in the Tower', 1830 and 'Young Christian Martyr', 1854–5 (both Louvre), and 'Strafford on his way to Execution,' 1835 (private collection). Displayed alongside are Delaroche’s expressive preparatory drawings for Lady Jane and a selection of comparative paintings and prints by his contemporaries, including Eugène Lami, Claude Jacquand and François-Marius Granet.

Monumental in scale, poignant in subject matter and uncanny in its realism, Delaroche’s depiction of the 17-year-old, who was Queen of England for just nine days, created a sensation when first unveiled at the Paris Salon of 1834. It appeared to usher in an entirely new form of painting. But what inspired a French artist in the 1830s to depict the final moments of a 16th-century English queen? In post-revolutionary France, artists began to combine monarchist sympathies with a Romantic interest in English literature and history. After the Battle of Waterloo in 1815, a generation of artists including Delaroche, Bonington and Lami found inspiration in Shakespeare, Byron and, above all, Walter Scott. Yet for Delaroche, English history provided a still more powerful muse. In a society deeply scarred by the violent upheavals of the French Revolution, English history presented remarkable parallels with recent events in French history – particularly the execution of Lady Jane Grey, the death of the princes in the Tower, the English Civil War and the regicide of Charles I.

Delaroche (1797–1856) first visited England and possibly Scotland in 1822 but returned to London five years later to prepare for his work on 'The Princes in the Tower', 1830 (Louvre). It is probable he visited the Tower of London itself, an experience which may have moved him to develop his two further Tower compositions: The Execution of Lady Jane Grey, 1833 (National Gallery, London) and 'Strafford on his Way to Execution', 1835 (private collection).

Like many of his peers, Delaroche showed a keen interest in the themes of usurpation and martyrdom. In 'Cromwell and Charles I', 1831 (Musée des Beaux-Arts, Nîmes), the artist depicts a sombre Cromwell contemplating the corpse of his enemy, the executed Charles. Always veiled in myth, the death of Lady Jane Grey (1537–1554) gave Delaroche his most poignant symbolic subject. Grey inherited the English crown amid a bitter political crisis following the death of Edward VI on 6 July 1553. Her reign ended on 19 July when Mary, her Catholic cousin and rival to the throne, led a successful counter-coup. Together with her young husband, Jane stood trial for treason. They were sentenced to death and Jane was re-imprisoned in the Tower, where she firmly resolved to become a Protestant martyr. She was beheaded on 12 February 1554. The events of that day have been fiercely debated ever since.

In Delaroche’s depiction, Jane is shown blindfolded and feeling for the executioner’s block. While emotionally the most compelling, this version of events owes more to 16th-century propaganda than to historical fact. Within six months of Jane’s death, her Protestant allies had her reinvented as an innocent martyr and victim of Catholic tyranny. In London, a dossier of doctored papers was soon in circulation, complete with the pathos of her groping for the block. Capturing the psychological moment of greatest intensity, Delaroche gave the Lady Jane myth an irresistible and seemingly unshakeable appeal. Appearing from the shadows in a dress of startling virgin white, she becomes the very apotheosis of female innocence.

Delaroche’s image was a striking reminder, for those with memories of recent French history, of the fates of Louis XVI, Marie-Antoinette and the Dauphin. Delaroche undoubtedly made such associations in his own mind, as is suggested by a sheet of studies in which thumbnail drawings for Lady Jane appear alongside a composition of the Dauphin and his sister, before July 1830 (Louvre). Towards the end of his life, Delaroche completed a startling memorial to France’s executed queen in 'Marie-Antoinette before the Tribunal', 1851 (The Forbes Collection, New York).

Throughout the exhibition, 'Painting History' examines the singular intensity of Delaroche’s historical paintings in light of his close relationship with the theatre. From the 1820s, there was an increasing tendency in French theatre to draw on pictorial forms, and for plays to be divided into so-called ‘tableaux’ as well as acts. This new kind of theatre had a profound influence on Delaroche, who was also keenly receptive to the spatial possibilities offered by stage craft. Meanwhile, his own work lent itself to dramatic recreation and on several occasions, his paintings were represented on the stage, including 'Lady Jane Grey' and 'The Princes in the Tower'. By the time he was painting 'Lady Jane', Delaroche had also become romantically involved with Mademoiselle Anaïs, an actress now thought to be his model for the queen. A newly discovered portrait of Anaïs in coloured chalk, 1832 (private collection) is displayed here for the first time.

The exhibition also demonstrates how French and British artists such as Edouard Cibot (Anne Boleyn in the Tower of London, shortly after her Arrest, 1835, Musée Rolin, Autun), Jean-Léon Gérôme (The Execution of Marshal Ney, 1868, Museums Sheffield) and Jean-Paul Laurens (The Hostages, 1896, Musée des Beaux-Arts, Lyon) continued to work in a manner directly inspired by Delaroche’s pioneering depictions. 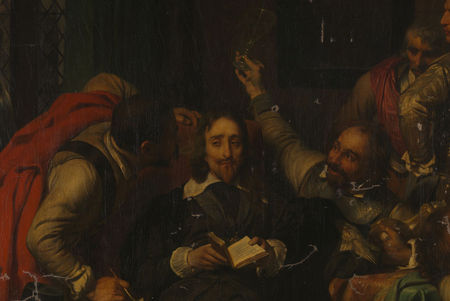