With compressed bulbous body and broad cylindrical neck rising to a lipped rim, covered overall with a sea-green glaze suffused with gold-tinted crackle, part of the interior of the small, shallow foot burnt red in the firing - 5½ in. (14 cm.) across mouth rim - Estimate : $30,000 - $50,000 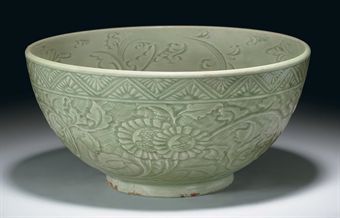 Heavily potted with deep rounded sides, the exterior carved with two scrolling, leafy chrysanthemum stems below a zigzag diaper border, the center of the interior impressed with a peony sprig below freely carved peony scroll in the well, covered with a glaze of olive-green color, most of the base unglazed and burnt red in the firing - 12¼ in. (31.1 cm.) diam. Estimate : $12,000 - $15,000