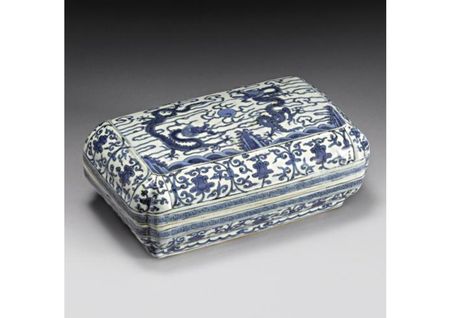 of well potted rectangular form with indented corners resting on a short foot, the cover with a rectangular panel enclosing two five-clawed dragons contesting a 'flaming pearl' amid cloud swirls and above rolling waves crashing against rockwork, surrounded by lotus blooms on meandering leafy stems above a keyfret band, the box decorated with a similar scrolling lotus meander below a keyfret band, inscribed on the base with the six-character mark within a double rectangle (2) length 9 1/2 in., 24.2 cm - Estimate 25,000 - 35,000 USD

NOTES:  A Wanli box of this design is included in the Illustrated Catalogue of Tokyo National Museum: Chinese Ceramics, vol. II, Tokyo, 1990, pl. 108; another from the Lauritzen collection in the Museum of Far Eastern Antiquities, Stockholm, is illustrated in L.Reidemeister, Ming-Porzellane, Leipzig, 1935, pl. 38; and a third from the collection of Chester Beatty was sold in these rooms, 10th December 1968, lot 62; see also a box similar in design and size sold in our London rooms, 12th June 2003, lot 150. painted with a dragon supporting a 'flaming pearl' surrounded by four further dragons in iron-red, green and yellow enamels and underglaze-blue, the reverse with flower sprays in underglaze-blue - diameter 12 5/8 in., 32 cm - Estimate 10,000 - 15,000 USD 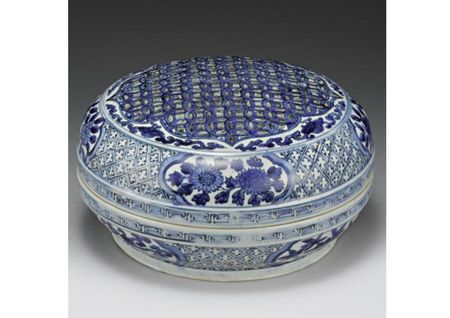 of circular form, the cover with a reticulated linked-coin design surrounded by a band with four panels filled with peony sprays reserved against an intricate diaper ground encircled by a keyfret band, decorated with similar panels on the base, the interior revealing the glaze of grayish-glue tone, the base glazed white (2) diameter 9 1/4 in., 23.5 cm - Estimate 25,000 - 30,000 USD the domed cover, base and sides painted with paired five-clawed red dragons pursuing 'flaming pearls' opposite flying phoenix, the interior of the cover and base painted with scattered clouds, the base divided into a larger and a smaller compartment (2) length 11 7/8 in., 30.2 cm - Estimate 30,000 - 40,000 USD 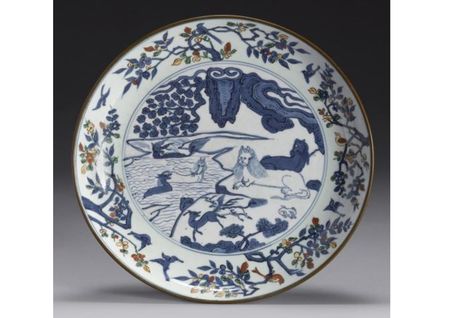 the central medallion depicting two long-maned lion reclining on a riverbank with a qilin and a deer gamboling in the foreground and watched by two horses and a dragon in the water, the rounded sides with birds on flowering branches detailed with iron-red, yellow and green - diameter 10 3/4 in., 27.3 cm - Estimate 10,000 - 15,000 USD of stout ovoid form, painted in underglaze-blue with alternating shaped rectangular panels of peony and lotus plants above a lappet band around the foot and panels of peaches at the shoulder, all reserved on a fretwork ground - height 17 in., 43.2 cm. Estimate 5,000 - 7,000 USD