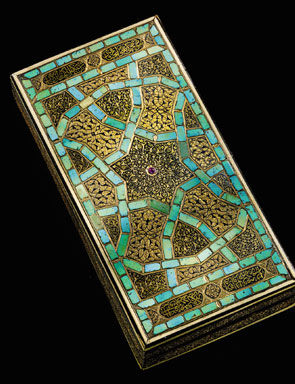 LONDON.- Sotheby’s announced that on Wednesday, April 14, 2010 in its biannual Arts of the Islamic World Auction, it will present for sale an unrecorded and hitherto lost early-16th century Ottoman ivory and turquoise-inlaid box set with rubies. This unique treasure, crafted by Persian goldsmiths working for the Ottoman court for a high-ranking courtly figure, is believed to have been made to contain scales to measure the weight of gemstones and was not known to exist until its recent rediscovery. Ottoman objects of such exquisite craftsmanship and quality rarely appear on the market and its sale is set to generate enormous excitement and interest among collectors, connoisseurs and scholars alike. The box is estimated at £500,000-700,000.

Commenting on this exquisite work of art and its rediscovery, Edward Gibbs, Senior Director and Head of Sotheby’s Middle East and India Department, said: “This superlative object highlights the exceptionally refined masterpieces produced by Persian goldsmiths working for the Ottoman court at the beginning of the 16th century. Its sumptuous ornamentation is unmatched in elegance and skill, rendering it an item of the highest aesthetic and historical value. Its rediscovery provides further insight into the astonishing talent of Safavid craftsmen during the first half of the 16th century and it will undoubtedly be studied by scholars for years to come.”

Measuring 17.3cm in length, 8.8cm in width and 3.2cm in height, and centred on a ruby jewelled-rosette, the box’s ivory filets and mosaic-sliced turquoise or firuzekari finely frame a series of symmetrical panels containing intricately carved and gold-inlaid vegetal patterns in what can be called the 'international Timurid style'.

The inscriptions on the lid of the box provide significant insight into the practical function of the box: ‘nabvad mihaki hamcho tarazu be-jahan / ta sang-e sabokbar be-meqdar-e garan / yak kaffe-ye u buvad mah o digar mehr /oftadeh qerane mehr o mah dar mizan’ ('There is no touchstone (?) like these scales in the world / To measure stones light and yet precious / One tray is like the moon, the other the sun / The conjunction of the sun and moon has fallen in its balance'). From the first two verses, it can be inferred that the box contained scales precise enough to measure the weight of gemstones. The ivory interior, decorated with a central jewelled medallion and four corner spandrels in gold and niello, shows remains of either an internal fitting or the original contents described by the poetic calligraphy on the exterior.

The extravagant luxury of Persian objects comprising precious metals and stones is recorded in early-16th-century accounts of Portuguese ambassadors to Shah Ismail's (founder of the Safavid Empire) court. During his stay at the Shah's encampment near Tabriz, Portuguese ambassador Tenreiro described 'bottles of gold and silver with turquoises and rubies inchased upon them'1, suggesting that such objects were meant for the exclusive use of the Shah and the governing elite.

An important victory at the battle of Chaldiran on August 23, 1514 marked Selim I's (Sultan of the Ottoman Empire between 1512 and 1520) successful campaign against Shah Ismail and led to the subsequent occupation of Tabriz in Persia, during which time an important number of the Shah's treasures were captured as booty and taken back to Istanbul. Though treasure taken by Selim during the sack of Tabriz no doubt included the finest of objects, among the most precious assets sent to Istanbul were the skilled artisans who were captured and taken to work in the Sultan's workshops. Persian goldsmiths or 'Acem had been active in Istanbul as early as 1480, but it is reasonable to conclude that the influx after 1514 was crucial in establishing their prominence in the Ottoman capital.

Though its floral decoration is highly reminiscent of Ottoman fashion, the meticulous nielloed gold work recalls Safavid traditions. Its superb quality is matched only by a handful of items now at the Topkapi Saray Museum in Istanbul, with which it shares strong correlations. With its turquoise fittings, set rubies and inscriptions, the most comparable example in the museum collection is a pen case with inkwell from circa 1500, which closely resembles the present box. While academic opinion is divided as to whether the Topkapi example belonged to the Shah himself and was part of Selim's booty or attributable to an 'Acem working for the Ottoman court, the offered lot is believed to have been produced by Persian goldsmiths working for the Ottoman court.

Removed from Persia following the battle of Chaldiran and now in the Topkapi Saray Museum, the intricate and varied arabesque designs on gold of a group of plaques from a belt bearing the titles and name of Shah Ismail I, as well as an armband signed by the craftsman Nur Allah (dated 913 AH/1507-8 AD), echo the present box's layered splitpalmette scrolls in carved and inlaid gold. The parallels are even more evident in the most ornate buckle, which contains comparable blossoming rosettes set with rubies and turquoise gems. With its turquoise mosaic, ruby gems and split-palmette patterns, but particularly in the ivory filets, carefully fitted along the object's edges, this unique lost treasure also bears a strong resemblance to an equivalent important mid-16th century box in the Topkapi Saray Museum collection.

The box links the traditions of Tabriz and Istanbul and embodies a cultural merging in the stylistic evolution of Ottoman courtly art at a seminal phase in its development. 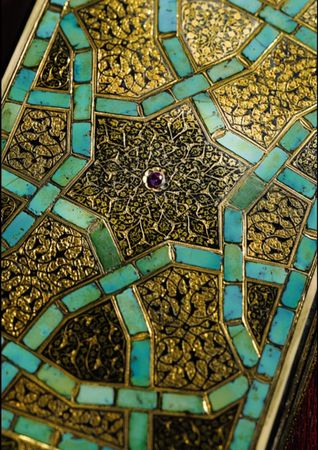