A fine and rare wucai 'garlic-mouth' vase. Mark and period of Wanli

A fine and rare wucai 'garlic-mouth' vase. Mark and period of Wanli 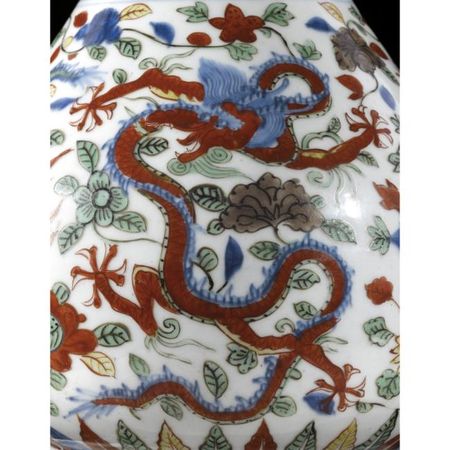 the stoutly potted large pear-shaped body supported by a wide straight foot, rising to a garlic-bulb shaped mouth, the main body decorated in the wucai palette including iron-red and vivid purplish underglaze-blue, painted with two pairs of ferocious dragons, each pair in mutual pursuit of a 'flaming pearl' amid scattered flowers on meandering leafy stems, beneath a band of upright and pendant triangles containing trefoils at the shoulder, the slender neck with two pairs of birds flying among flowering and fruiting shrubs, the garlic-bulb mouth with multi-colour lotus scrolls, the rim inscribed with a six-character mark in underglaze-blue in a cartouche reserved on a foliate band, wood stand - 43.5 cm., 17 1/4 in. Est. 2,000,000—3,000,000 HKD. Lot Sold 9,380,000 HKD

NOTE: Wucai wares of the Wanli period belong to one of the most sumptuous group of wares of the Ming dynasty, and are characterised by vibrant designs in vivid colours. The present vase, which derives its form from bronze originals, is magnificent in size and brilliantly painted with dragons on the body, the dynamism of which is accentuated by the elegant scene of birds and flowers on the neck.

Similar vases can also be found decorated with a dragon and a phoenix; see one published ibid., cat. no. 109; and another included in the exhibition One Thousand Years of Jingdezhen, Hagi Uragami Museum, Hagi, 2007, cat. cover. Another commonly found motif on Wanli vases of this form is that of birds and waterfowl; for example see a pair of vases in the Idemitsu Museum of Arts, included in the exhibition Imperial Overglaze Enamelled Wares in the Late Ming Dynasty, Museum of Oriental Ceramics, Osaka, 1995, cat. no. 22.