Pieter Gerritsz. van Roestraeten (Haarlem 1630-1700 London). Dutch painter, active in England. From 1646, when he entered the Guild of St Luke in Haarlem as a portrait painter, until 1651, he was apprenticed to Frans Hals, whose daughter, Adriaentje Hals, he married in 1654. Sometime between 1663 and 1665 he and Adriaentje went to London. Van Roestraeten was one of the more successful of the many Dutch painters who tried to make a living in England during the late seventeenth century. Peter Lely, apparently afraid of competition in the field of portraiture, offered to introduce van Roestraten to Charles II on the condition that he ceased painting portraits. Van Roestraten presumably kept his promise, for there are no further known portraits, other than self-portraits.
Although he never achieved the degree of fame enjoyed by Sir Peter Lely or Sir Godfrey Kneller, there was a demand for his work, and his pictures fetched high prices, enabling him to remain in London for more than thirty years until his death in 1700. 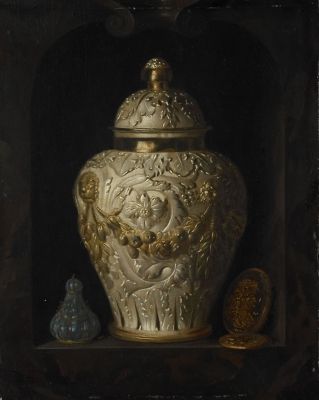