Ah Xian's 2008 exhibition the five Period Rooms at the Gemeentemuseum, The Hague. photo from www.flickr.com The lustrous yet durable surface of lacquer is achieved by painting multiple layers of the sap from the native Chinese rhus verniciflua tree onto a base material. Ah Xian’s busts in lacquer are his most recent experiments with Chinese craft traditions. This work in red lacquer shows a dragon coiled around the figure’s face carved in relief. Although Ah Xian’s porcelain works have featured dragons, none are as arresting as this. The relief carving, which is essentially a series of incisions into the surface of the sculpture, conjures up a more active and in some ways more violent relationship between the design and the figure. (www.kunstaspekte.de) 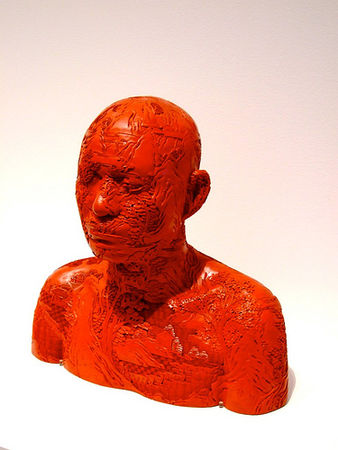 Born in Beijing, Ah Xian first came to Australia in 1989, as visiting artist at the Tasmanian School of Art, Hobart. Stranded by the events of Tiananmen Square, he sought asylum here, settling in Sydney with his brother and fellow artist Liu Xiao Xian. In the alienation of exile, Ah Xian found a degree of cultural solace in historical national traditions, expanding his painting practice in the late 1990s to incorporate traditional Chinese decorative arts, often working in collaboration with artisans in his native country. In the breakthrough China China series, naturalistic porcelain busts (life casts of family and friends) are decorated with all-over images and patterns variously drawn from brush painting, ceramics (especially blue and white wares) and textiles. This concept creates a mismatch of form and surface that animates the faces in surprising, even surreal conjunctions: a butterfly on the eyes, for example, or a mountain on the forehead. More broadly and more significantly, it effectively illustrates the tension between Ah Xian's motherland culture and that of his adopted home, or between the interior self and the public face. (from www.sothebys.com)