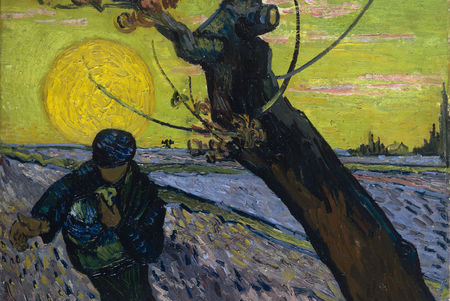 BOSTON, MA.- Imitation may be the sincerest form of flattery, but for Vincent van Gogh, it was a means of self education for the artist in the 1880s, who copied numerous works by Jean-François Millet to teach himself how to draw and paint. The visual dialogue that ensued between master and student is the focus of Visiting Masterpieces, an ongoing series at the Museum of Fine Arts, Boston (MFA), which showcases great art from museums and private collections around the world within the context of the MFA’s encyclopedic collection. To inaugurate the series, the Museum welcomes van Gogh’s "The Sower" (1888), on loan from the Van Gogh Museum in Amsterdam, to Boston for juxtaposition with the work that inspired it, Millet’s The Sower (1850), one of the MFA’s celebrated masterpieces. The paintings, which have never before been seen together in Boston, will be on view from May 11 to August 8 in the Impressionist Gallery.

“We are excited to initiate this series with the loan of a major van Gogh from Amsterdam,” said Malcolm Rogers, Ann and Graham Gund Director of the Museum of Fine Arts. “Visitors to the MFA will have the rare opportunity to enjoy these two joint paintings side by side to see how van Gogh took inspiration from Millet, but not slavishly —he created an iconic image from his own imagination.”

This special installation presents two very different interpretations of a farmer sowing seeds in the fields of France painted by Millet and van Gogh. It also features three masterpieces by van Gogh from the MFA’s collection, created during the artist’s sojourn to Provence in southern France from spring 1888 until late spring 1890. These include "Postman Joseph Roulin" (1888) and "Lullaby: Madame Augustine Roulin Rocking a Cradle" (La Berceuse) (1888–89), paintings of van Gogh’s close friends in the rural town of Arles, as well as Ravine (1889), a landscape he painted shortly after his arrival in the environs of an asylum in the town of Saint-Rémy, where he spent most of the last year of his life (recent collaborative research by conservators and curators has revealed the presence of a lost painting beneath the canvas).

Dutch artist Vincent van Gogh (1853–1890) became familiar with works by Frenchman Jean-François Millet (1814–1875) in 1875, the year Millet died. At that time, van Gogh was in the employ of the Parisian art dealership Goupil & Cie, which organized a major sales exhibition of Millet’s pastels and drawings from the collection of his patron, Emile Gavet (many of these eventually came into the collection of Bostonian Quincy Adams Shaw, who bequeathed them to the MFA through his heirs). Six years later, van Gogh began to discover himself as an artist, drawing inspiration from Millet, of whom he said: “Millet is father Millet, counselor and mentor in everything for young artists.” Van Gogh poured over the biography of Millet written by the artist’s supporter, Alfred Sensier, published in Paris and Boston in 1881. He also collected prints by or after works by Millet, as well as photographs, copying them extensively as part of his self-taught study of the rules of drawing. (His first copy after Millet dates to 1881; later, he copied works by other renowned artists as well, including Rembrandt, Delacroix, and Daumier.) Van Gogh saw pastels of Millet’s "The Sower", as well as photographs of the oil and prints, but never the painting itself—which left France for Boston in 1855. He made more than 13 variations (excluding sketches) of Millet’s iconic work, among them several paintings.

Through such examination and imitation, van Gogh also hoped to better understand the peasant genre that Millet had mastered so famously. “I must draw diggers, sowers, men and women at the plough, without cease…I no longer stand as helpless before nature as I used to do,” van Gogh wrote. In each work on display at the MFA, Millet and van Gogh capture the nobility of time-honored labor in harrowed fields, of man working at one with, or against, the forces of nature in a continuation of the cycle of life. Both sowers are depicted in rural France, which, despite the Industrial Age, had not changed much between the time Millet painted his work in Barbizon in 1850, and 1888, when van Gogh completed his version of this image, set against a glowing sun in a field outside Arles, toward the end of his career.

When seen side-by-side, interesting comparisons can be made between Millet’s sower (measuring approximately 40 x 33 inches) and van Gogh’s (approximately 13 x 16 inches). On Millet’s dramatic canvas, the powerful figure of the worker fills most of the frame, his cloth bag slung over his shoulder as he scatters the seeds while walking with a determined gait. The landscape and the sower appear in shadows, with highlights only on the man’s sinewy legs and on the farmer driving a harrow pulled by oxen on the distant horizon. In contrast, van Gogh’s vibrant painting places the sower at the lower left quadrant of the canvas, which is divided by the trunk of a flowering tree, angled toward the large, shining yellow disk of the sun, evoking the Japanese imagery that van Gogh had discovered and collected in Paris. While inspired spiritually by Millet’s iconic painting, considered shocking in its day, this version by van Gogh is another radical interpretation of the theme.

“Between the beginning of his career as an artist, around 1881, and the end of that decade, Vincent van Gogh returned again and again to the theme of a worker sowing or harvesting grain in a field,” said George T. M. Shackelford, Chair, Art of Europe, and Solomon Curator of Modern Art at the MFA, who organized Visiting Masterpieces. “Inspired from the beginning by Millet’s example, he produced numerous drawings and paintings on the theme—some almost direct copies of the MFA’s Millet, but others more imaginative interpretations. The ‘labors of the field’—sowing and reaping, above all— preoccupied his thoughts until the time of his death in the summer of 1890.”

Three major paintings of The Sower by Millet are owned by museums around the world: the MFA, the National Gallery of Wales, and the Yamanashi Prefectural Museum in Japan. The MFA’s painting, generally acknowledged as the one shown at the Paris Salon of 1850–51, represents a watershed moment in Millet’s career that was his coming of age as an artist. "The Sower" was purchased from Millet by Bostonian William Morris Hunt around 1851–52, and was later sold to Quincy Adams Shaw, the greatest 19th-century collector of Millet. This painting from Shaw's collection was given to the MFA in 1917, nine years after his death, along with many other works by the artist, enabling Boston to become by far the largest repository of Millets in the United States with a collection totaling 190 works (39 paintings, 31 pastels, 56 drawings, nine watercolors, and numerous prints executed in a variety of techniques). This holding is rivaled only by the national collections of France.