Set to each side with applied archaistic gui dragon handles, the body of the vase decorated with raised archaistic champlevé enamel panels depicting confronted kui dragons contesting a flaming pearl, enamelled in a rich blue, turquoise, purple and yellow, the flat reverse pierced with a square aperture for attachment. 18.3cm (7¼in) high. Estimate: £15,000 - 20,000, HK$ 180,000 - 240,000 Of bombé form, finely enamelled around the sides with a multitude of butterflies in flight amidst blossoming peonies and prunus, all on a turquoise diaper ground, with a ruyi-head border at the rim, the base and mouth with European gilt-bronze mounts. 74.4cm (29¼in) wide across handles. Estimate: £8,000 - 10,000, HK$ 95,000 - 120,000 Each dish with shallow rounded sides, the cavetto delicately enamelled with two butterflies in flight above sprays of bell flower, chrysanthemum and pampas, the sides with demi-flowerhead scrolls framed by bands of red enamelled rings below the copper bound rim, the undersides enamelled with foliate scrolls similarly framed by rings and the base with petal-shaped ringlets, all reserved on a bluish-turquoise ground. 8.6cm (3⅜in) diam. (2). Estimate: £6,000 - 10,000, HK$ 71,000 - 120,000

Footnote: The design of the present saucer-dishes closely resembles that of Yongzheng famille rose dishes. Compare a famille rose dish, Yongzheng mark and period, sold at Christie's Hong Kong on 30 May 2006, lot 1441. The superb craftsmanship required to execute the intricate design in cloisonné enamel in miniature proportions is most likely a result of a special commission and is also indicative of the Yongzheng period Imperial ateliers. Each of waisted cylindrical form and surmounted by a slightly-domed top, finely enamelled around the sides with the individual four characters of the reign mark within white medallions, reserved against scrolling and alternately enamelled lotus flowers, the tops each with a full-faced five-clawed dragon against clouds. Each 5.1cm (2in) high (2). Estimate: £6,000 - 8,000, HK$ 71,000 - 95,000 Each with a central cartouche framed by a raised chased foliate border, delicately enamelled with tree peony growing amidst pierced rockwork, the first painted with a pheasant cock and hen on the grass and the second with a pair of birds perched on a tree bearing peach, all reserved on a blue ground decorated with leafy lotus scrolls, the projecting rim and underside similarly enamelled with lotus scrolls and a key-fret border, with a ruyi-head border above the splayed foot with interlocked floral bands and stylised petals, each suspended from a chased gilt handle formed of ribboned rings held from the tails of two confronted dragons, the vases when back to back form a complete hanging flower basket. 19.2cm (7⅝in) high (without handles) (2). Estimate: £5,000 - 7,000, HK$ 59,000 - 83,000 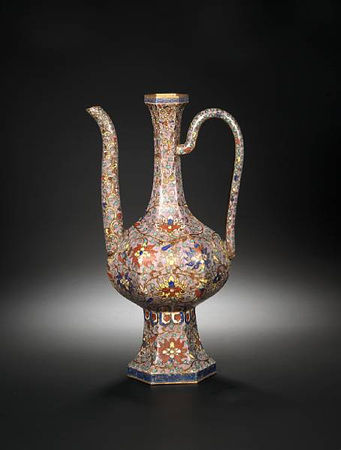 Of octagonal form, rising from a high, spreading foot, the waisted neck set to one side with a slender, curving spout, and to the other with a high, curved handle, enamelled around the facets with a continuous meandering lotus with a classic-scroll border and upright and pendent lappets at the foot, with beaded, pendent ribbons on the neck, all enamelled in vibrant red, turquoise, blue, yellow and white, on a lilac ground. 29.7cm (11½in) high. Estimate: £3,000 - 4,000, HK$ 35,000 - 47,000 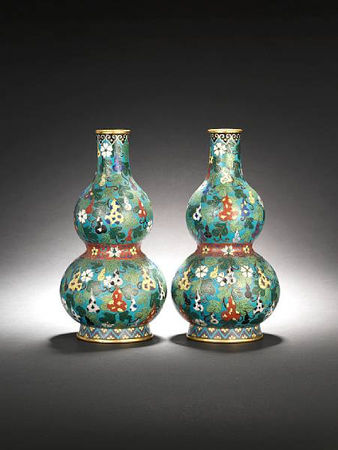 Each finely cast in the form of a double gourd, the compressed spherical lower body rising from a slightly splayed foot, the upper body tapering to a cylindrical neck, the mouth, foot and base in gilt bronze, both sections of the gourd enamelled with further patterned and multi-coloured gourds issuing from leafy stems, set against a turquoise blue ground, with a border of segmented florets at the foot, lotus scroll at the waist and ruyi-heads at the neck. 29.8cm (11½in) high (2). Estimate: £2,500 - 4,000, HK$ 30,000 - 47,000 Of hexagonal form with canted corners and surmounted by circular cover, enamelled around the exterior on each of the six sides with a single lotus blossom against a deep blue ground and framed by archaistic turquoise scrolls, the lotus and scrolls repeated on the shoulders against a turquoise ground, the cover with a pair of dragons, all against a deep blue ground. 10.5cm (4in) wide (2). Estimate: £2,000 - 3,000, HK$ 24,000 - 35,000 The mirror painted on the reverse with a Xi character encircled by the bajixiang, Eight Buddhist Emblems, reserved on a turquoise cross-hatched ground, framed by a blue border with floral sprays, supported on a lotus green-stained ivory section above an ivory gourd raised on the gilt and blue handle. 27.1cm (10⅝in) high. Estimate: £1,500 - 2,000, HK$ 18,000 - 24,000

Footnote: Compare a similar hand mirror from the Stephen D. Winkworth Collection, illustrated in the Catalogue of the International Exhibition of Chinese Art 1935-6, London, 1935, Catalogue no.2200. See also a similar hand-mirror exhibited at the Victoria and Albert Museum, London, no.FE.54-1970. Footnote: The present panel bears relation to a group of similarly painted panels attributed to the Qianlong period, which are believed to have been tribute wares from Guangzhou.

The soft famille rose enamels and positioning of the figures within a pastoral setting is reminiscent of European water-colour paintings. Compare a repoussé-enamelled example exhibited in the Ashmolean Museum, Oxford illustrated by M.Gillingham, Chinese Painted Enamels, Oxford, 1978, Catalogue no.118. A very large repoussé plaque formerly in the collection of Mrs J. Clifford Roscoe, Yorkshire is illustrated by S.Jenyns and W.Watson, Chinese Art II, London, 1980, pl.112, where it is stated that such plaques would have been produced for the European market or the Yuanming Yuan, see ibid, p.152. Cast in three sections, with a base, central compartment and cover, each enamelled with archaistic scroll work and ruyi-head motifs against a turquoise ground, 11cm (4in) wide; together with a rare cloisonné enamel 'puddingstone' vase, of gall-bladder form with naturalistic enamelling in imitation of the sedimentary rock, 19th century, 16.7cm (6½in) high (4). Estimate: £1,500 - 2,000, HK$ 18,000 - 24,000