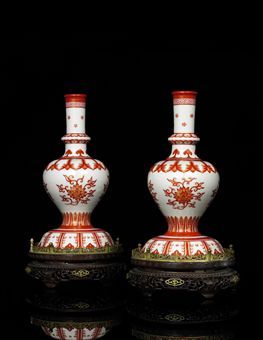 Notes: A single identical example can be seen in the painting by Giuseppe Castiglione in the National Palace Museum, showing the Emperor Qianlong seated beside a table set with some of his treasures, see Palastmuseum Peking Schätze aus der Verbotenen Stadt, Berlin, 1985, no. 41, pl. 24; for another example presented to Cheltenham College, England, by Yuan Shikai in 1914, and now in the Weishaupt Collection, see G. Avitabile, From the Dragon's Treasure, London, 1987, no. 176, p.127; and see P. Lam, Qing Imperial Porcelain, Hong Kong, 1995, no. 83. Another example can be found in the British Museum, London. Notes: Vases of this rare form appear decorated in both underglaze cobalt blue and also, like the current example, in underglaze copper red with underglaze-blue lines encircling the base. In both cases the Kangxi six-character marks are in underglaze blue. An underglaze-blue example in the collection of the Palace Museum, Beijing is illustrated in The Complete Collection of Treasures of the Palace Museum - 36 - Blue and White Porcelain with Underglaze Red (III), Hong Kong, 2000, p. 15, no. 11. An underglaze copper-red-decorated yaoling zun in the collection of the Tianjin Museum is illustrated in Porcelains from the Tianjin Municipal Museum, Hong Kong, 1993, no. 130. Another copper-red example, similar to the current vase, but with less well-controlled copper red, is in the collection of the Shanghai Museum, illustrated in Kangxi Porcelain Wares from the Shanghai Museum Collection, Hong Kong, 1998, pp. 10-11, no. 7. A further copper-red example in the Baur Collection is illustrated by J. Ayers in The Baur Collection, vol. 4, Geneva, 1974, no. A 528. The Metropolitan Museum of Art, New York, has two Kangxi vases of this form, one decorated in underglaze blue, and one, like the current example, in underglaze copper red. The latter appears slightly smaller and more delicately potted than the former (see Oriental Ceramics, The World's Great Collections, vol.11, Tokyo/New York/San Francisco, 1982, no. 119). Further copper-red examples include one from the Collection of Frederick J. and Antoinette H. Van Slyke, sold at Sotheby's, New York, 31 May 1989, lot 197, and two from the J.M. Hu Collection, sold at Sotheby's, Hong Kong, 29 October 2000, lot 14, and 23 October 2005, lot 351. See also an identical example sold in our New York Rooms, 15 September 2009, lot 422.