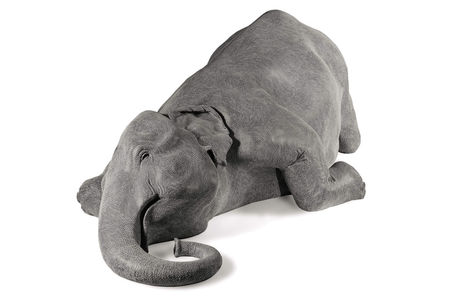 LONDON.- Sotheby's announced that it will offer for sale Bharti Kher’s celebrated sculpture The Skin Speaks a Language not its Own, one of the most iconic and most talked-about works of art by a contemporary Indian artist and the masterpiece of the leading female artist of her generation. Awe-inspiring in its scale, detail and beauty, this life-sized female Indian elephant, will be offered in Sotheby’s Contemporary Art Evening Auction on Monday, June 28, 2010. The work appears at auction for the very first time since it was created in 2006 and is estimated at £700,000-1,000,000.

James Sevier, Director and Specialist, Sotheby’s Contemporary Art Department, said: “This is a work which took Bharti Kher ten months to create, every fold and recess of the sunken form is meticulously contoured by the intricately arranged patterns of thousands of bindis that organically swarm across the beast in a second skin. It is India’s identity in all its glorious complexities that is the hero of this masterpiece and the sculpture remains a beacon of India’s avant garde art scene at the beginning of the 21st century. We are delighted to be offering this masterpiece - which is not only an exquisite work of art in its own right, but also an icon of contemporary Indian culture and art - on the international platform of Sotheby’s Contemporary Art Evening Sale this June in London.”

Discussing the resonance and importance of the sculpture, Zara Porter-Hill, Director and Head of Sotheby’s Indian Art Department, commented: “Despite our familiarity with elephants, nothing prepares the viewer for the emotional experience of seeing Kher’s elephant, huge and incongruous in the gallery space. With her head resting on her front foot, she is brought down to our level and her glassy black eye entreats a communion and proximity rarely encountered in the wild. It is the most important work by this leading artist to appear on the auction market and will appeal not only to collectors of Indian Art, but also to the wider international community of connoisseurs of zeitgeist Contemporary Art.”

Brought to its knees in a seemingly untenable position, simultaneously peaceful and painful, The Skin Speaks a Language not its Own is a vision that engenders extreme pathos from the viewer; is she rising or is she falling, resting or expiring, living or dying. Kher combines two symbols of Indian culture – the bindi and the elephant – in a powerfully emotive sculpture which leaves the viewer asking whether this is a vision of India on the rise or an India exhausted by its own rapid modernisation.

The now endangered native Indian elephant has long been a symbol of the subcontinent. Sacred in Hindu mythology, temples are ubiquitously adorned with stone carvings of the powerful, uprights beasts which are revered and worshipped in religious ceremonies. Throughout the ages, elephants have also been symbols of state power and royal authority in India, used as ceremonial mounts for royal and religious dignitaries and familiar trope of traditional Indian miniature painting. Prized for their intelligence, domestication and versatility, their physical strength has been variously employed in warfare, industry and agriculture and even capital punishment. In the West elephants have become a symbol of Indian culture.

In The Skin Speaks a Language not its Own, Kher personifies this creature as the archetype of India, its culture, history and civilisation, and marries it with another identifier of Indian ethnicity, the bindi, Kher’s signature motif. The bindi in India is traditionally a mark of pigment applied to the forehead which is associated with the Hindu symbol of the third eye that sees beyond the material world. Kher was particularly attracted to the white, serpentine bindi used in this work because of its spermatozoa form and its oxymoronic relationship to the traditionally female accessory, striking deeper associations of gender roles and definitions of femininity in India.

Kher plays on the pluralism of ancient Indian customs juxtaposed with modern Western values and as the inherent contradiction of the title The Skin Speaks a Language not its Own suggests, outward appearance and inner values do not always coalesce. The social roles, traditional rituals, gender relationships and popular culture of India past and present are all scrutinised from Kher’s unique trans-national vantage point. Born in London and trained in Newcastle, Kher is a rare reverse émigré who moved back to India from the United Kingdom in 1992 at the age of 23, having not set foot on Indian soil for almost twenty years. Questions of her own identity and her place as a successful female artist with a western upbringing in modern Indian society are inevitably entwined into her ethnographic observations of contemporary Indian life.

Confronted with this sculpture laden with symbolism, Kher leaves it open to interpretation whether India the elephant can rise up and march on as the economic global powerhouse of the future that so many predict, or whether the weight of history and the pace of change prove too much for this beast of burden, crestfallen and crippled by its own cultural contradictions which do not fit the western mould of progress. Made in Kher’s studio in Delhi, The Skin Speaks a Language not its Own – one of three unique variations plus the artist proof – eloquently articulates India’s dilemma.