Chinese contemporary artist Zeng Fanzhi listens to a journalist's question during a news conference before the official opening of his exhibition at Bulgaria's National Gallery for Foreign Art in Sofia. REUTERS/Stoyan Nenov

Zeng Fanzhi is here at the invitation of businessman and patron of arts Spas Roussev, who also takes credit for the long list of guests of the Bulgarian and foreign elite.

Zeng Fanzhi shows 18 paintings from his collection, including ones of the Mask Series which brought him world fame in the 1990s.

In 2008, the artist set an auction record for China's modern art with a painting of the Mask Series that fetched 9.7 million US dollars at Christie's.

Born in Wuhan, Hubei province in 1964, Zeng Fanzhi decided at a very early age to become a painter. He set the bar for himself extremely high, endeavoring to become an artist whose work would one day transcend conventions, borders, fashion and time.

In 1991, Zeng graduated from Hubei Academy of Fine Arts. At that time, the ideological changes in China and the style of German Expressionism deeply influenced him. His early paintings are immediately recognizable by their signature expressionistic strokes, that lend provocative sensations of underlying violence and agony to his lavishly rendered canvases.

Upon moving to Beijing, he began his celebrated Mask series in 1994. In Mask No 13, a man is wearing a white grinning mask and caressing a Dalmatian with his enormous and chiseled hands. The intimacy between the man and the dog suggests the artist’s optimistic view towards the world around him; yet, there is an element of the sinister lurking behind the mask on the man’s face. By using sharp brush strokes, Zeng magnifies psychological tensions between the stylized theatrical mask and the subdued human body.

Anxiety and psychological gravity are also revealed in his portraits, including a self-portrait from 2009, in which the artist, in a long red robe, is sitting on a stool in front of a massive solemn landscape of mountains. He stares intensely out of the painting. His thoroughly apathetic grimace suggests an attempt to create a work that is a raw expression of his psychological condition. The subjects of his portraits are depicted with a set of ridiculously large and bold eyes looking out of the painting, as if to confront the viewer, capturing their inner personalities, with the unflinching honesty that characterizes his work.

Zeng’s landscape paintings mark his departure from his critically renowned Expressionistic style. Rendering thick woods, sometimes including people or animals, Zeng brings his landscape to life with a frenzied network of brush strokes, replicating the inarticulate calligraphy of muffled sentiment and the galvanization of repressed anxiety. Painting with two or more brushes simultaneously, Zeng uses one to describe his subject, while others meander the canvas, leaving traces of his subconscious through processes. This action of construction and deconstruction transforms the pictures into near abstraction.

Since 2009, Zeng has started his meditation with meticulously painting very simple solitary still lifes: a pair of shoes, a fish or a piece of lamb, as an effort to reinterpret the history of art in a contemporary manner. With Trough these seemingly mundane subjects, Zeng demonstrates his vigorous painting ability and his desire to shift from expressing daunting human psychics to reconciling his inner self with nature and his surroundings. The paintings no longer reflect conflicts and restlessness in the world; instead they are parts of an introspective odyssey in searching for truth within that goes beyond rational understanding. With Information from the Bulgarian News Agency. 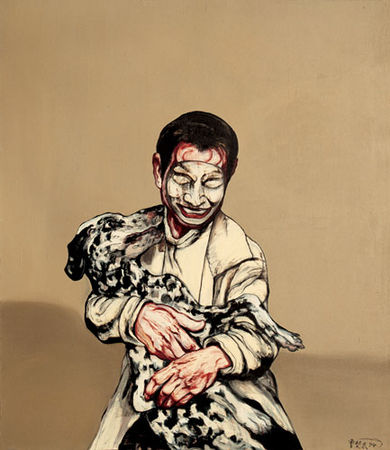