LONDON.- A landscape painting by Herman Saftleven once owned by one of Oscar Wilde’s closest friends is expected to fetch £15,000-20,000 when it is auctioned at the Old Master Paintings sale on Wednesday 7th July at Bonhams, New Bond Street. It is being sold to fund a chair in Demography at the London School of Hygiene and Tropical Medicine.

The painting depicts a mountainous river landscape with figures loading barges, and comes from the Collection of Carlos Blacker (1859-1928), an Englishman who spent a great deal of his life abroad, especially in Paris. He was a constant friend to Oscar Wilde, with whom he frequently corresponded, and also acted as an intermediary between Wilde and his wife, Constance, after the former’s release from prison in 1897. Blacker took a financial interest in Lady Windermere’s Fan and The Happy Prince was dedicated to him. The letters exchanged between him and Wilde were auctioned in 1986. Blacker was a prolific correspondent and linguist (he learnt a new language every two years) and his circle of friends included George Bernard Shaw and Anatole France. 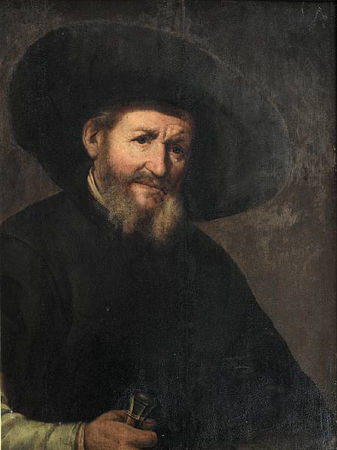 This painting, along with lot 51, A Portrait of a bearded gentleman (£5,000-7,000) is being sold to fund a chair in Demography at The London School of Hygiene and Tropical Medicine. The school aims to contribute to the improvement of health worldwide, through teaching and training in national and international public health and tropical medicine, and through informing policy and practice in these areas.