Cabinet by Emile Bernard Acquired by the Indianapolis Museum of Art

Cabinet by Emile Bernard Acquired by the Indianapolis Museum of Art 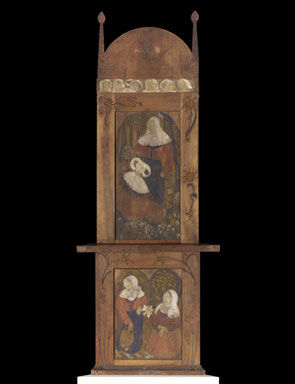 INDIANAPOLIS, IN.- The Indianapolis Museum of Art announced today the acquisition of a rare corner cabinet with scenes of Breton life, carved and painted by Pont-Aven School artist Emile Bernard. One of only four known examples of important wood furniture produced by the Pont-Aven School, this cabinet further enhances the IMA’s renowned Pont-Aven School collection—the most distinguished in North America.

The Pont-Aven School was named for a remote village in the French province of Brittany where an international group of progressive artists gathered during the 1880s and 1890s. A founder of the School, Emile Bernard (1868–1941) collaborated closely with Paul Gauguin and was an innovator of early modern painting. Inspired by the carving they discovered in Brittany, both artists were moved to create wood sculpture and furniture.

The cabinet, acquired from the famed collection of Samuel Josefowitz, is a strategic complement to the IMA’s holdings. Its Breton imagery and stylistic elements not only provide new insight into Bernard’s working methods, they offer fascinating links to the 18 paintings and nearly 100 prints that comprise the IMA collection.

“The Bernard Cabinet is a masterful fusion of painting, sculpture, and furniture, and is a major addition to our world-renowned collection of 19th century art,” said Maxwell L. Anderson, The Melvin & Bren Simon Director and CEO of the IMA.

In combination with the IMA’s recent acquisition of Gauguin’s Volpini prints, the addition of this rare cabinet brings the IMA’s Pont-Aven collection to a new level of excellence. “This highly unusual piece is as clever as it is beautiful,” said Ellen W. Lee, The Wood-Pulliam Senior Curator at the IMA. “It reveals Bernard’s unique take on life in Brittany – and his growing prowess as a carver. At nearly 10 feet tall and capable of fitting snugly into a corner, it has real gallery presence.”

The cabinet is embellished with vignettes of Breton life (also known as bretonneries) such as the women’s intricate headdresses, as well as a subtly inserted self-portrait. It is distinctive for its harmonious colors, elegant surface pattern, and stylistic unity. Adorned with winding tendrils and flowers, the cabinet also offers rich connections to art nouveau and the arts and crafts movement. 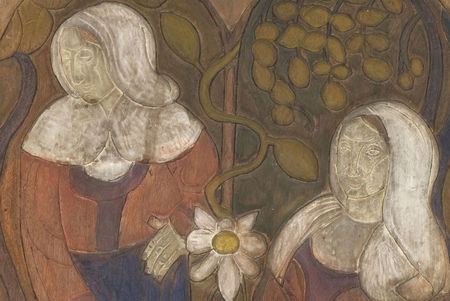