An important Limehouse teapot and cover, circa 1746-48. photo Bonhams

Of octagonal shape with a scrolled handle and a mushroom finial, painted in blue with a Chinaman seated beneath a willow tree, flanked by rockwork and other plants, the same figure repeated on the reverse, typical leaf-like motifs painted on and near the spout and handle, the cover with a flowering rose bush, 11.7cm high (minute chip to tip of spout) (2) - Sold for £33,600

Footnote: This teapot and cover is one of four Limehouse examples included in a lot sold by Christie's on 14 October 1948 from the contents of Wentworth Woodhouse in Yorkshire, the seat of the Earls Fitzwilliam. They were described as '..probably Lowestoft...' and the lot, which also included a pair of sauceboats and a mug, sold for 22 guineas. The buyer was David Manheim, who sold the teapots on to Geoffrey Godden's father, mindful of his son's interest in Lowestoft. Geoffrey was then able to buy three of the teapots from his father for £11. The fourth was sold and is now in the George R Gardiner Museum of Ceramic Art, Toronto. All four are illustrated by Geoffrey Godden, English Blue and White Porcelain (2004). The present lot is colour pl. 16 and pl 87. The cover is shown in detail at pl 88, p 85 where it is mentioned that the cover may not match the body decoration. The Toronto example painted with the same design is shown at pl. 89 and another with Buddhistic emblems at colour pl 17 and pl 90. A fourth example is the following lot in this sale and is shown at colour pls. 18 and 19. These Wentworth Woodhouse teapots are discussed at length on pp. 84-93. See also Geoffrey Godden, Eighteenth-Century English Porcelain, A Selection from the Godden Reference Collection (1985), Chapter 4 and Limehouse Ware Revealed (1993), pl 45, p 32 and pls 47 and 48 for related fragments. This lot is illustrated alongside further related shards by David Barker and Sam Cole (ed), Digging for Early Porcelain, fig 16, p 50, and it is also illustrated by Geoffrey Godden, An Introduction to English Blue and White Porcelains (1974), pl. 19, fig. 94 and British Porcelain, an Illustrated Guide (1974), pl. 319. For other Limehouse teapots sold in these rooms see the Watney Collection, Part 1, lot 129 and Part 3, lot 909, also the Sutherland Collection, lot 104. Of bell shape with an everted quatrelobed rim, the flattened angular handle with a scrolled thumbrest, the exterior moulded with overlapping leaves, a leaf painted in blue between each one, a border below the interior rim delicately painted with Buddhistic emblems alternating with diaper panels, a single floret in the cup, 5.6cm high - Sold for £13,200

Footnote: Illustrated by Geoffrey Godden, English Blue and White Porcelain, pl 95, p 92, pl 77, p 72 and colour plate 10, p 701, British Porcelain, An Illustrated Guide (1974), pl 319, p 269, An Introduction to English Blue and White Porcelains (1974), pl. 19, fig. 97 and British Porcelain, an Illustrated Guide (1974), pl. 319. It is also illustrated in Eighteenth-Century English Porcelain, A Selection from the Godden Reference Collection (1985), pl 38, p 44. No other example of this form of cup appears to have been recorded. The moulded decoration of overlapping leaves is seen on some Limehouse sauceboats and creamboats. See the sauceboat, lot 42 in this sale, illustrated in Limehouse Ware Revealed (1993), pl 65, p 36 and the creamboat illustrated at pls 96 and 97. Overlapping leaves in a slightly different form are also seen on Limehouse scent bottles and vases illustrated at pls 87 and 88, p 42. The distinctive handle is similar to that found on a Limehouse creamboat from the Billie Pain Collection, lot 90 and provides a link to Lund's Bristol, founded by 'one of the principal manufacturers at Limehouse which failed'. The small ovoid bottle with a slender neck, finely painted with flowering peony branches trailing around the body, issuing from curious rockwork, another leafy plant to one side, 11.5cm high - Sold for £10,800 Of leaf shape, the underside moulded in relief with detailed veining and applied with five crescent-shaped feet, the upper surface with impressed veins, painted in blue with two insects in flight above a twin-branched flowering plant, 19.8cm high - Sold for £6,240

Footnote: Illustrated by Geoffrey Godden, English Blue and White Porcelain (2004), colour plate 11, p 74 and pl 78, p 77 (right) and An Introduction to English Blue and White Porcelains (1974), pl. 19, fig. 98. A comparison with the following lot provides a lesson in the extent to which paste and glaze of Limehouse can vary considerably from piece to piece. Although both dishes are of the same shape and form, there are some significant differences in the glaze. This lot has been more thickly glazed, the glaze appearing to have been slightly blued to counteract the creamy or yellowish tone of the body. It is also slightly more opaque, presumably because of the addition of tin oxide. A very similar dish is illustrated in Limehouse Ware Revealed (1993), fig 129, p 63. Fragments of similar dishes from the Limehouse factory site are illustrated at figs 131 and 132 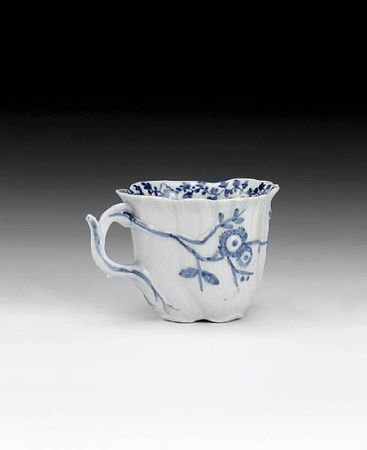 Of quatrelobed form with irregular spiral ribbing simulating a shell, the rim slightly everted, the crabstock handle with a delicate protruding thumbrest, its extending stalk terminals moulded with flowering prunus encircling the cup and picked out in blue, the interior painted with a floret and a foliate border below the rim, 6.3cm high (firing crack in rim very slightly extended) - Sold for £6,960 Of scallop shell form with crisp shell moulding to the underside and a dished oval section to the base for use as a handle, delicately painted in blue with a flowering plant, a central flower below a wispy stem bearing a smaller bloom, 14.8cm high (broken section cleanly restored, a tiny hole drilled in the handle for suspension) - Sold for £2,640

Footnote: Provenance: Simon Spero, who purchased this lot from the sale of contents from Belton House, Lincolnshire, in the early 1980s. This was one of a group of Limehouse pieces in the kitchens of the house, all of which had been drilled with a single hole, suggesting they had been used in the house as decoration from the time they were made. Limehouse pickle dishes of scallop shell form are found relatively often. This larger dish of the same basic shape, but with a semi-circular section at the base, is much rarer and no other example appears to have been recorded in the literature. Interestingly, some rare Worcester scallop shell pickle dishes also bear this semi-circular section. The painting on the present lot is closely related to that on a very rare heart-shaped pickle dish from the Susi and Ian Sutherland Collection, lot 106, and the leaves at the base of the plant relate to those found on another larger Limehouse dish, lot 105 in the same sale