of pear-shaped form, the rounded sides resting on a slightly flared foot rising to an everted mouthrim, the shoulder molded with a raised band and set with a pair of stylized elephant handles, covered overall in a pale greyish-blue glaze, the base inscribed with a six-character Qianlong seal mark in archaising characters: height 12 in., 30.5 cm - Estimate 180,000 - 250,000 USD

NOTE: This vase is exceptional for its magnificent size and fine glaze in imitation of Song dynasty 'Ru' ware. The crackled wares of 'Guan' , 'Ge' and 'Ru' of the Song period were highly regarded by the Qianlong emperor who not only collected them but also commissioned the making of new porcelain with similar glaze from the Imperial kilns for his appreciation. The present vase is an outstanding example of the very high quality monochrome wares produced in the Imperial kilns at Jingdezhen during his reign. based on an archaistic hu form, the generous pear-shaped body supported by a slightly splayed foot, set with a pair of tubular handles just below the lipped rim, the body covered overall in a rich olive-green glaze, the base glazed and impressed with a sixcharacter reign mark; height 10 in., 25.3 cm - Estimate 120,000 - 150,000 USD

NOTE: It is unusual to find a pear-shaped vase with lug handles in the teadust glaze. The form harks back to the archaic bronze hu  and the glaze imitates the green patination found on bronzes. A flambé-glazed Yongzheng marked vessel in the Palace Museum, Beijing, is illustrated in The Complete Collection of Treasures of the Palace Museum. Monochrome Porcelain, Hong Kong, 1999, pl. 180. A teadust-glazed vase of the same shape was sold in our Hong Kong rooms, 9th October 2007, lot 1524. 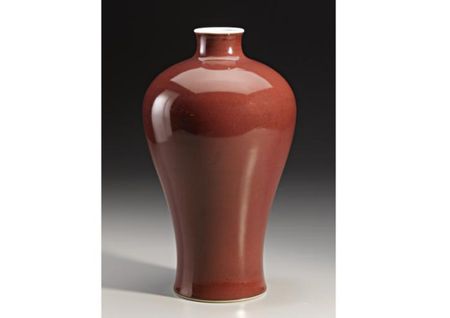 The high shouldered body tapering to a slightly flared foot supporting a short waisted neck, covered overall in a rich red glaze, pooling to a deeper tone at the foot, the base incised with a six-character seal mark. height 12 1/4 in., 31 cm - Estimate 80,000 - 120,000 USD

NOTE: The use of copper-red glaze at Jingdezhen was revived by the Kangxi emperor after the decline in usage during the late 15th, 16th and early 17th centuries. With the effort to reproduce classic Ming sacrificial-red (jihong) porcelains, Qing copper-red pieces quickly outnumbered their Ming counterparts. Nigel Wood in Chinese Glazes, London, 1999, p. 180, notes how the French Jesuit missionary, Pere Francois D'Entrecolles (b. 1664-1741) wrote letters giving detailed accounts of the copper-red production at Jingdezhen, the sourcing of the copper for the glaze, the recipes and the kiln location of the firing of these wares. D'Entrecolles was aware of the difficulties involved in the making of copper-red wares and his account confirms the high level of technical knowledge of the potters at Jingdezhen. Although copper-red pieces can be readily found from the Kangxi and Yongzheng periods, by Qianlong's reign they become fewer in number. A small number of Qianlong mark and period examples are recorded. See a slightly smaller  meiping  in the Roemer Museum, Hildesheim, also with a Qianlong reign mark and of the period, illustrated in Ulrich Wiesner, Chinesisches Porzellan, Mainz am Rhein, 1981, pl. 99; and another sold in our Hong Kong rooms, 10th April 2006, lot 1521. Another vase of this form and glaze, from the collection of Professor Ross Edman, was sold in these rooms, 23rd September 1995, lot 426 and again, 18th March 2008, lot 151. modelled after the archaic, ding, the rounded sides carved with a wide band of two taotie , masks on a basketweave ground, scattered with florets flanked by a pair of upright loop handles, all supported on three columnar legs decorated with flanges, covered overall in a pale yellow glaze; height - 5/8 in., 16.8 cm - Estimate 60,000 - 80,000 USD Well-potted with a generously swelling body tapering to a narrow neck, culminating in a broad everted mouth rim, supported on ashort flared foot, the exterior covered with an even copper-red glaze suffused with crushed raspberry, stopping evenly at the foot,the interior and recessed base glazed white; height 11 1/2 in., 29.3 cm - Estimate 40,000 - 60,000 USD

Property of a private Canadian collection of broad baluster form, finely carved around the exterior with four large dragons moving amidst wisps of clouds, all below a ruyi and key-fret collar encircling the short straight neck and everted rim, covered overall with an unctuous pale celadon glaze, wood stand (2); height 13 in., 33 cm - Estimate 40,000 - 60,000 USD

NOTE: A related celadon vase, also with a Qianlong reign mark and of the period, was sold in our Hong Kong rooms, 9th November 1982, lot 231; and another unmarked celadon vase carved with peony scroll and dragons was sold at Christie's New York, 16th September 1999, lot 363. of flattened baluster form, the pear-shaped body molded with a petal-form panel on each side bordered by foliate scrolls, enclosing lotus pads and flowers molded in high relief, the waisted neck flanked by a pair of zoomorphic handles rising to a flared mouthrim, covered overall in a brilliant turquoise-blue glaze; height 10 in., 25.5 cm - Estimate 30,000 - 40,000 USD the thinly potted rounded sides supported on a short tapered foot, covered overall in a rich yellow glaze, the base glazed white and inscribed with a six-character reign mark in underglaze-blue; diameter 8 1/2 in., 21.4 cm - Estimate 20,000 - 30,000 USD Each of baluster form, the rounded sides carved with a wide band of peonies on a foliate scroll ground, the waisted shouldersfurther carved with a band of upright lappets and flanked by a pair of high-relief lion mask handles picked-out in black glaze, allsupported on a tall splayed foot (2)height 7 1/2 in., 19 cm - Estimate 15,000 - 20,000 USD The pear-shaped body on a tall splayed foot rising to a bulbous head, incised overall with a dense leafy lotus scroll, the exterior covered with a glaze of deep turquoise toneheight 8 /4 in., 22.3 cm - Estimate 10,000 - 15,000 USD 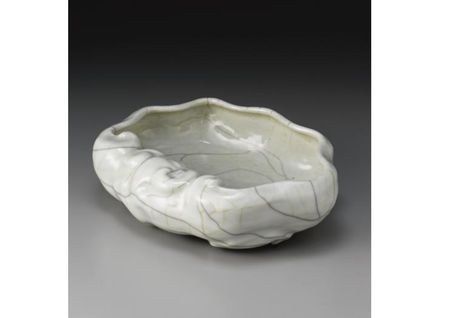 naturalistically modeled in the form of a lingzhi fungus, the washer further centered by a ruyi  head with its stalk continuing down to the underside and dividing into three further ruyi  heads to form the feet, covered overall in a pale white glaze with wide black craquelure interlaced with finer pale brown craquelure; width 10 in., 25.5 cm - Estimate 8,000 - 12,000 USD.

NOTE: A smaller washer in the shape of a lingzhi and also covered with a glaze imitating 'Guan' ware, is in the Collectionof the National Palace Museum in Taipei, Taiwan, and illustrated in Harmony and Integrity. The YongzhengEmperor and His Times, Taipei, National Palace Museum, 2009, p. 254, pl. II-77.