Fine Chinese Ceramics and Works of Art: 9 November at 10.30am, Christie’s King Street
Christie’s Asian Art Week London commences with a remarkable array of porcelains, metal work, furniture, and organic materials such as jade, ivory and rhinoceros horn, offered in the Fine Chinese Ceramics and Works of Art sale on Tuesday 9 November 2010. Featuring over 350 lots, dating from the Shang Dynasty (1600c - 1100c BC) to the Republic Period (1912-49), estimates range from £2,000 up to £1.2 million. The sale is expected to realise in excess of £8million.

The star lot of the whole sale is ceramic: an important and very rare small guanyao baluster vase, Hu southern Song dynasty (1127-1279), 13th century (estimate upon request) which is offered from the Ronald Longsdorf Collection. This exquisitely delicate rich greyish-blue glazed vase has extensive, highly attractive crackle and is of beautiful proportions, measuring just 5.1/8 in. (13 cm.) tall. The bulbous lower body is supported on a tall slightly splayed foot, with a tapering neck which ends with a flaring dished rim.

Important porcelains include a magnificent famille rose armorial ‘goose’ tureen and cover, Qianlong, circa 1765-75, with the coat-of-arms for the Spanish family of Ochoa de Olza in a cartouche at its breast (estimate: £200,000-300,000), which is offered from the property of a private European collector. The service was made for Domingo Esteban de Olza y Domezain (1723-1816), Olza was a resident of Cádiz and was registered as a merchant in 1755, he was the first delegate of The Royal Company of the Philippines, from when it was founded in 1785 until 1797. This is a rare surviving example of an armorial tureen of this shape, made for the Spanish market.

The beauty of jade - white, celadon and spinach - is celebrated with over 100 scholarly objects and vessels. Two of the most important examples include depictions of the eight Buddhist emblems and are from the Qianlong period (1736-95): the first, a finely-carved imperial pale celadon jade baluster shaped vase and cover with intricately pierced and carved kui dragon handles, is offered from the Alphonse Servais Collection (estimate: £80,000-120,000). The second, a spinach-green jade moonflask and cover, has a flattened lobed body and the emblems are surrounded by a profusion of peony blooms (estimate: £30,000-50,000). A further highlight is a superb 18th century white jade carving of a duck, which is offered at auction for the first time in nearly 30 years (estimate: £80,000-120,000).

Important works executed in organic materials are further exemplified by an elegant pair of fine and rare 18th century imperial engraved turned ivory bowls, which were formerly in a private French collection and measure 3.3/4 inches (9.5 cm.) in diameter (estimate: £600,000-800,000). In light of the fiercely competitive bidding witnessed in New York, March 2010, for a single bowl of this rare type which realised $842,500 when it was offered from the Blumenfield Collection, they are set to attract considerable excitement and international attention. Each bowl is incised with a ten-character poetic inscription ending with a two-character seal mark, the bases are stamped with the seal mark Gong zhi (made for the palace).

Other organic highlights featured include a magnificent large pair of finely-carved baluster shaped cinnabar lacquer vases, Qianlong period (1736-95) (estimate: £30,000-50,000) and an attractive dark honey-tone rhinoceros horn libation cup on a stand from the Kangxi period (1662-1722) (estimate: £100,000-200,000). The finely carved exterior of the cup depicts a continuous landscape, with a scholar and his attendant amidst pine and pawlonia trees and a handle in the form of a gnarled pine trunk. For centuries, rhinoceros horn carvings, like this one from the Alphonse Servais Collection, have been considered among the most valued of ancient Chinese works of art. Four rhinoceros horn cups will be offered in total.

The beauty and quality of Chinese metal work is illustrated by a fine and heavily cast imperial giltbronze figure of Amitayus the ‘Buddha of Infinite Life’ from the Kangxi period (1662-1722) (estimate: £200,000-300,000) which is offered from a Private English Collection and a pair of rare imperial zitan - framed gilt-bronze and lacquer Ning Xi panels, late Qianlong period (estimate: £200,000-300,000). Each rectangular panel is embossed with the characters Ning Xi which are written in Xingshu and may be translated as ‘joy gathering’ or ‘to gather joy’; they are picked out in red lacquer, on a dense ground of gilt vaporous clouds and writhing long-bodied scaly dragons. They are offered from an important European private collection, having been purchased in 1918 from Yamanaka & Co., Beijing.

Chinese furniture rarely features in Christie’s London Chinese sales, however some wonderful lots will be offered this Autumn, led by an 18th century pair of rare imperial table-top zitan and lacquer cabinets, each with delicately carved doors and lacquered sides, with finely painted idyllic landscapes (estimate: £300,000-500,000). These are offered from the same important European private collection as the Ning Xi panels and were also purchased from Yamanaka & Co. Beijing, in 1919. Zitan, a wood which is almost unknown in the West, is the most prized of all tropical hardwoods as it is an exceptionally rare species. Between the 17th and 19th century only the imperial household was able to use zitan as the dark purple wood was considered similar to the colour reserved for use by the Qing dynasty. A further beautiful example of furniture is an 18th century imperial gilt-decorated lacquered stand with a square top (estimate:£30,000-50,000).

Interiors: 9 November at 10.00am, Christie’s South Kensington
Christie’s South Kensington’s popular Interiors sales will be centered on an East meets West theme once again on 9 November 2010, to coincide with Christie’s Asian Art Week in London. The sale will offer a wide array of Asian art to furnish the home, with estimates ranging from £500 to £5,000. The morning session comprises approximately 200 items of furniture, works of art and textiles, following on from the success of the May Interiors Asian session. Perfectly complimenting Christie’s specialised sales, the auction aims to provide first-time buyers with the opportunity to start a collection.

Japanese Art & Design: 10 November at 1pm, Christie’s South Kensington
This November, Christie's South Kensington’s Japanese Art and Design sale spans the mid-to-late Jomon period (3000 – 300 BC) until the mid-20th century, with works including ceramics, lacquer, bronzes, prints and screens that can be displayed not only in an 18th century style interior, but with dramatic impact in a contemporary environment. Estimates range from £1,000 to £40,000.

Ceramics including Kakiemon, Kutani and Nabeshima are led by a museum-exhibited and published collection of Arita blue and white illustrating many of the early designs used on export ceramics traded by the Dutch East India Company in the mid-late 17th century. Estimates range from £800-£5,000 and include a group of Arita Kendi (gorgelet), dating from the late 17th century.

Lacquer highlights range from refined Japanese domestic taste represented by some early Negoro wares to a Swedish academic’s collection of Edo period lacquer. The simple yet powerful forms of Negoro ware, which are strikingly contemporary in design, date to the 15th and 16th centuries and are traditionally associated with the Negoro Temple complex founded in the 12th century. They are thought to embody communal Buddhist living and also elements of Zen. A fine example is a Negoro ceremonial washbasin from the Momoyama Period (16th century) (estimate: £5,000-8,000). The Swedish collection of lacquer includes suzuribako [writing boxes], tebako [accessory boxes], inro [medicine cases] and kogo [incense boxes] each decorated with elegant designs of Momoyama and Edo periods (16th-18th centuries) including autumnal grasses, moonlit lakes and shells. These works were all collected from the 1940s onwards, with many pieces acquired from earlier 19th century European collections such as that of James Orange, the early collector who published his collection in 1907.

Highlights from the 19th and 20th centuries (the Meji and Taisho periods) include works by leading artists such as Namikawa Yasuyuki, and a fascinating group of post-war art from the Craft movement. Leading the Meiji period are a pair of Namikawa Yasuyuki green ground vases, formerly in the collection of the Earl Cairns (estimate: £40,000-60,000), and an impressive late 19th century ivory okimono [sculptural ornament] of a woman and child travelling in a palanquin with two attendants (estimate: £25,000-30,000). The Craft movement, which took place between the end of the Taisho Period (1912-26) and the beginning of the Showa period (1926-1989), is represented by a collection of bronzes, silver and lacquer including Nishide Muneo’s two panel screen, Osaka Landscape, 1955 (estimate: £6,000-8,000), and a bronze vase by Yasuyoshi, Taisho period (20th century) (estimate: £2,500-3,000).

The sale concludes with Part I of the Shep Brozman Collection of Inro, the distinguished New York collector. This impressive group of almost one hundred inro dating from the 17th to the 19th century comprises fine examples by artists including Shibata Zeshin, Koma Koryu and Yoyusai, depicting scenes from daily life, legends and Dutch traders. Estimates range from £1,000 to £25,000, with highlights such as a two-case inro in the form of an ink cake, signed Zeshin, 19th century (estimate: £18,000-25,000).

Chinese Ceramics, Works of Art and Textiles: 12 November at 10.30am & 2pm, Christie’s South Kensington
Drawing Christie’s London Asian Art Week to a strong close is The Chinese Ceramics, Works of Art and Textiles sale on Friday 12th November at South Kensington. Over 400 lots dating from the 14th to the 20th century will be offered, including magnificent pieces from several private collections from Asia, Europe and the United Kingdom. With estimates starting from £1,000 up to £25,000, the wide array of media featured ranges from porcelain, jade, cloisonné enamel, cinnabar lacquer and wood to Canton enamel, ivory, agate, amber, lapis lazuli, paintings, scrolls and textiles.

The beauty and technical intricacy of cinnabar lacquer is demonstrated in a box and cover from the Qianlong period (1736-1795) (estimate: £7,000-10,000). Also of the period is a sacrificial yellow glazed jar of strikingly simple design, Qianlong impressed six character seal mark (1736-1795) (estimate: £6,000-10,000). Jars of this form were produced in five different colors and made for the imperial altars where the emperor personally made sacrifices. A comparable yellow example, which was made for the Diqitan - The Altar of Earth - is illustrated in The National Palace Museum’s catalogue for the Special Exhibition of Qing Monochromes, Taipei, 1981.

The superb selection of Chinese Costumes & Textiles featured presents a strong array of robes and court accessories, which continue to be of particular interest to Mainland Chinese buyers. These lots are led by an early Qing Dynasty qilin rank badge from the 1660s (estimate: £5,000-10,000). Everyone who attended the Imperial Court had to wear a surcoat of plain blue over their dragon robe with a badge denoting their rank prominently displayed on the chest and back. The gentleman who would have worn this badge was an important official, a military officer of the First Rank.

Further highlights include a private collection of robes and Buddhist textiles from a family whose ancestors were in China in the late 19th century. The collection of approximately 30 lots includes a number of un-cut court robes, which have never been cut and made into robes (estimates range from £1,000 to £5,000), including an embroidered summer chifu court robe, Qing dynasty, circa 1900 (estimate: £3,000-5,000). The collection also features a number of Mandarin court necklaces with combinations of stones such as amber and jadeite, Qing dynasty, circa 1900 (estimate: £4,000-5,000), as well as a small number of wonderful 18th century sutra covers, for the Buddhist holy books, exemplified by a pair of blue and jade brocade padded sutra covers from the Qing dynasty, circa 1800. 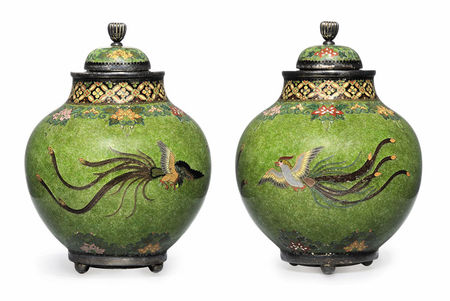