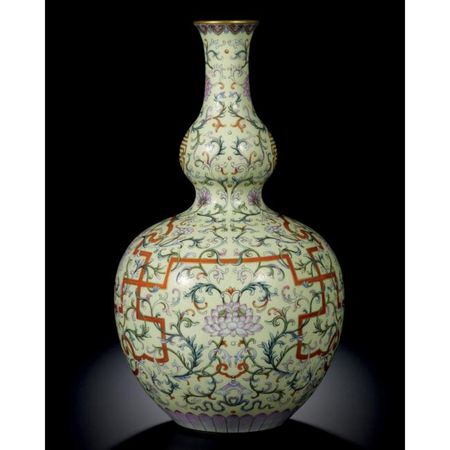 masterfully potted, the large globular lower bulb gracefully sweeping up to a significantly smaller upper bulb rising to a proportionally elegant slender neck and flared mouth, the lower bulb meticulously painted in soft pastel famille-rose enamels with large stylized lotus, double-lotus, peonies and attendant hibiscus flowers, all borne on a continuous meandering scrolling foliate vine intertwined around an iron-red and gilt wan lattice, the foliate scroll rising vertically to the upper bulb encircling two gilt shou medallions below a pair of pink lotus flowers, all between a pink and blue ruyi-head collar at the mouth and an upright lotus petal band skirting the foot, and reserved against a pale lemon-yellow ground finely incised with a dense scrolling feather sgraffiato ground, the interior and underside glazed in bright turquoise, the mouth and foot edged in gilt, the base inscribed with a six-character iron-red mark on a white ground; 40 cm., 15 3/4 in. Estimate 30,000,000—50,000,000 HKD. Lot Sold to Hong Kong-based connoisseur Alice Cheng 252,660,000 HKD

NOTE: In form and decoration this pale yellow gourd-shaped vase represents one of the classic styles of the Jingdezhen imperial workshops during the Qianlong period, but its elegant design is particularly successful, making it one of the most stylish creations accomplished in this technique. When porcelain painters at Jingdezhen adopted techniques developed at Beijing in the early Qianlong reign, it resulted in most sumptuous porcelain decoration. Sgraffiato work, where a formal design is carved into a solid background colour, was developed at Beijing, where the carved designs usually consisted of formal diaper patterns. It generally appeared on the outside of bowls and dishes that on the inside showed freely-drawn nature scenes. At Jingdezhen, this style was elevated to primary decoration and was perfected through most delicate engraving of scrollwork with a needlepoint, which conveys an impression of rich brocade.

On the present vase the carefully shaded floral scrolls in subtle pastel tones are entwined around red-and-gold trellis, like climbers on a pergola. The multiple overlapping of the different colours required formidable organization of the design. Not surprisingly, it does not appear to have been often attempted. A pair of yellow-ground yangcai vases in the National Palace Museum, Taiwan, recorded and illustrated in Liao Pao Show, Huali cai ci: Qianlong yangcai/Stunning Decorative Porcelains from the Ch'ien-lung Reign, Taipei, 2008, pl. 32 and p. 281 shows a somewhat reminiscent design, but with more fanciful strapwork.

The double lotus blooms in the centre of both sides echo a motif from an auspicious flower painting done in 1723 by the Italian court painter Giuseppe Castiglione (Lang Shining) and presented to the Yongzheng Emperor upon his enthronement. The painting shows a bunch of lotus and other plants, with double blooms, a double pod and double ears of corn – auspicious omens heralding a prosperous reign; see Wang Yaoting, Lang Shining yu Qing gong xiyang feng/New Visions at the Ch'ing Court. Giuseppe Castiglione and Western-Style Trends, Catalogue of an exhibition at the National Palace Museum, Taipei, 2007, pl. 11 (fig. 2). Similar double lotus blooms can also be seen on yangcai vases in the National Palace Museum, Taipei, illustrated in Liao Pao Show, op.cit., pls 27-29.

The band of lotus petals shaded from rose-pink over white to pale green that encircles the base of the vase is a feature known from the best famille rose vessels of the Yongzheng and Qianlong periods, which is not usually combined with sgraffiato decoration. Compare a fine Yongzheng box and Qianlong gourd-shaped vase with similar lotus petals in Regina Krahl, Chinese Ceramics from the Meiyintang Collection, vol. 2, London, 1994, pls 961 and 962.

This vase comes from Fonthill House, one of the grand English country estates, from the collection of Alfred Morrison (1821-1897), and may go back even further, to Lord Loch of Drylaw (1827-1900). Hong Kong-based connoisseur Alice Cheng holds a yellow-ground famille-rose double-gourd vase that she bought at a Sotheby's auction in Hong Kong October 7, 2010. The vase, with a seal mark and period of Qianglong, was sold for HK252,660,000 ($32.4 million) on Thursday, said to be a world record for any Chinese work of art or porcelain at auction. REUTERS/Sotheby's.

HONG KONG (REUTERS).- A Chinese Qing dynasty vase sold for HK$253 million (20.2 million pounds) in a Sotheby's sale in Hong Kong on Thursday, a world record at auction for any Chinese porcelain.

"This is definitely a milestone," Nicolas Chow, the Deputy Chairman of Sotheby's Asia told Reuters. "Chinese works of art took their place on the world auction stage today."

In Sotheby's current autumn sales, however, a selection of rare works from four major private collections and a flood of free-spending Chinese millionaires, contributed to what many called one of the best sales of Chinese ceramics in recent years.

"I'm very happy," said Cheng. "As long as you like something, even if it's expensive it's worth it," she told reporters.

The price was more than the about $28 million (17 million pounds) paid for a 14th century blue and white porcelain jar sold by Christie's in 2005, though less than a calligraphy scroll by Song dynasty poet Huang Tingjian that sold for around $64 million at a June Beijing auction by Chinese auctioneers Beijing Poly.

The globular yellow-ground Qing vase, decorated with flowers and golden emblems for longevity, is an exemplar of the so-called "famille rose" family of Qing vases that have been among the most highly sought after works among wealthy Chinese in recent years.

"It's astounding," said veteran New York-based dealer James Lally. "I feel this is not a bubble. We've seen so much depth to this market. We're stunned because there's no precedent for it."

Fired in the 18th century during the Qianlong period of the Qing dynasty, the gourd-shaped vase has an impeccable provenance and put up for sale by longtime collector J.T. Tai.

"I can safely say there has not been a famille rose vase of a finer quality in the last 10 or 15 years," said Sotheby's Chow.

In other signs of the Chinese art market's ebullience at the top end, a pair of famille rose "floral medallion" vases sold for HK$140 million ($18 million) while a Qing white jade "Xintian Zhuren" seal, sourced from a reclusive overseas Chinese collector, made $16 million, a world record for an imperial seal.

"Every so often something like this happens," said Nader Rasti, a London art dealer. "A psychological barrier has been broken," he said of the blockbuster prices. (Editing by Jonathan Thatcher)