of mid greyish-green mottled jade, made in three sections, the ribbed cylindrical body with a rib of chevron motif above and below, on a slightly flaring foot, with sloping shoulder, the truncated neck with horizontal rib, delicately carved in low relief with acanthus leaves; 18 cm. high - Sold for £9,600

Note: The unusual form of object in jade can be attributed to a Muslim craftsmen probably working in Norther India in the 18th Century. The shape appears to be derived from Islamic metal candlesticks of the Medieval period. For a similar but smaller jade candlestick of similar form attributed to the Ming dynasty, exhibited at the Royal Academy of Arts in 1935-36, see Exhibition Catalogue International Exhibition of Chinese Art, London, 1935, pl. 251, no. 2790. Another candlestick of different form, but with similar decoration can be found in the collection of the National Palace Museum, Taipei (Catalogue of a Special Exhibition of Hindustan Jade in the National Palace Museum, Taipei, 1983, pp. 254-55, pl. 65). of tapering form, the back carved in low relief with undulating floral vines; 3.9 cm. diam.- Sold for £3,840 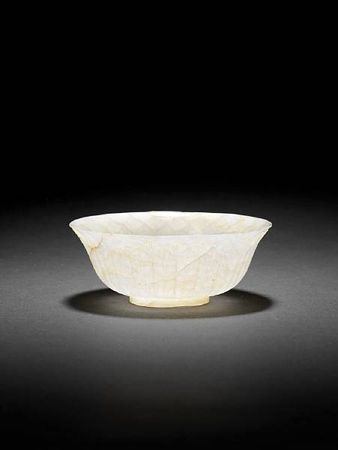 light green jade with two black veins, of shallow form with slightly upturned rim, carved in relief with a stylised lotus flower head forming the centre of a cruciform motif with leafy stems at right angles, with twin handles of openwork foliate form, the exterior rim with a band of foliate sprays; 17 cm. max. diam. - Estimate: £2,000 - 3,000, € 2,400 - 3,600