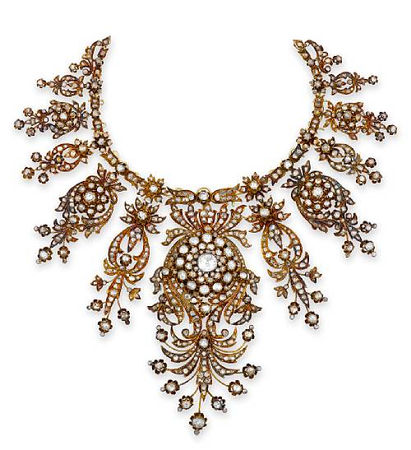 designed as elaborate graduated openwork sections of rose-cut diamonds in a floral motif, completed by a (later) gold backchain; sections can be converted to brooches and earrings with fittings provided; accompanied by an associated pair of earclips; with (later) fitted box; mounted in fourteen karat gold; length: 17 1/4in. (tiara and some brooch fittings deficient) - Estimate: $15,000 - 25,000 the necklace designed as a series of delicate openwork wirework panels of floral motif each detailed with small table-cut diamonds, suspending a pendant of similar design; a pair of earclips en suite (fittings later); with (later) fitted box; necklace length: 17in. Estimate: $2,500 - 3,500 Note: Ms. Blanche Thebom was one of the great operatic mezzos of the postwar era. Making her concert debut in 1941, she became the leading dramatic mezzo-soprano of the Metropolitan Opera for 22 years and created the American premiere performances of Baba the Turk in Igor Stravinsky's The Rake's Progress, the Mother in Strauss' Arabella, and Mére Marie in Francisc Poulenc's Dialogues of the Carmelites.

In her impressive 22 seasons with the Met she appeared in 356 performances, 28 roles and 27 works. She performed in various opera houses in America and Europe with great success. Ms. Thebom was the first American artist to sing at the Bolshoi Opera in Moscow, and had two command performances before the Queen of England.

Blanche Thebom is also remembered for her Dorabella in the historic production directed by Alfred Lunt of Mozart's Cosi fan Tutte, and for her Brangäne on Flagstad/Wilhelm Furtwängler recording of Tristan und Isolde.

In 1967, Ms. Thebom was appointed head of the Southern Regional Opera Company in Atlanta; then in 1968, she was appointed director of the opera workshop of San Francisco State University. She had an elegant presence that impressed everyone who met her.

Blanche Thebom was admired during her illustrious career for the rich maturity of her voice, her face and figure, her profound acting ability and innate musical intelligence, and even her beautiful tresses (which reached a length of 6 ½ ft.!). She left an indelible memory as one of the last great Divas.