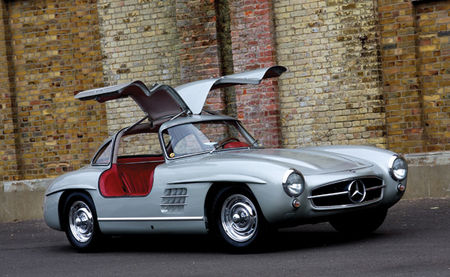 There are a great many enthusiasts and historians who believe that the Mercedes-Benz 300SL is, perhaps, the greatest road car ever built. No one who has ever owned or experienced a 300SL Gullwing will likely ever forget it. That the car appeared in production form at all was the result of fortuitous circumstance and was certainly not originally planned by the factory.

The original Mercedes-Benz 300SL was created for the 1952 racing season by the company to test the waters prior to M-B making a full-scale return to racing competition. It was practically makeshift expediency to allow an early entrance to racing following WWII and to keep the M-B name in the news long enough for the firm’s upcoming 1954 Grand Prix car to be completed. To deem this exercise successful is a bit of an understatement – a second and fourth at the Mille Miglia, first and second at Le Mans and the Nürburgring, the same in the Carrera Panamericana, and a one-two-three sweep at Bern, Switzerland.

Mercedes-Benz did not intend to put the car into production, but U.S. importer Max Hoffman had other ideas. Hoffman, both a master marketer and a man of great insight, convinced Daimler-Benz to offer a production model by ordering 1,000 of them to be built and sent to the United States. Since the competition model had been sourced from off-the-shelf parts of Mercedes’ 300-series saloon cars, it seemed relatively easy for the manufacturer to honour his request. The car, however, was exceedingly complex mechanically and not really designed for volume production. Nonetheless, thanks to the persistence (and influence) of Hoffman, M-B proceeded with limited production and the car was born. Fuel injection replaced the race car’s carburettors; the Bosch mechanical unit would be the first for a production car. The new Karl Wilfert-designed body was largely steel rather than all-aluminium and included bumpers and other creature comforts not desired in a competition car. All this shot the car’s weight up from the racer’s 1,900 pounds to nearly 3,000. Yet even in production form, underneath remained Rudi Uhlenhaut’s brilliant tubular space frame chassis and the powerful 3.0-litre six-cylinder engine.

The 300SL became the first Mercedes to be introduced in the United States before it was even shown in Germany. It was unveiled in New York on 6 February, 1954, and it would take the automotive world by storm. The SL moniker reflected the pioneering use of multi-tube space frame construction. It also featured fully independent suspension in addition to its fuel-injected, 240 hp, 3.0-litre (2,996 cc) straight six with dry sump lubrication; the motor inclined to the side in order to reduce the height of the bonnet. All the power was delivered through a four-speed manual gearbox, giving the car a 150 mph top speed and 0-60 mph in just 8.8 seconds, making it the fastest production automobile of its time. The result was a car that you could buy in New York City in 1954 for the princely sum of $6,820 and cruise to your weekend home in Connecticut at top speed, should you dare to try it.

The gull-wing doors used on the racing version of the car were continued on the production car, as they were necessary to maintain the structural integrity of the space frame construction. This novel approach to building a car was not without difficulties. Mercedes had gone all the way towards a theoretically perfect multi-tube space frame structure where all the tubes were slim and absolutely straight and none had to withstand bending or torsional stresses of any nature. Taken to these extremes, this would deny access to the car altogether, so there were inevitable compromises needed to gain entrance to the passenger compartment. To ease the problem, the frame was very deep along the sills, and the doors were arranged to hinge along their top edge and open upwards in “gull-wing” fashion.

Front suspension was by coil springs and double wishbones along with high-pivot swing axles at the rear. This meant for tricky handling as the rear suspension could induce wild over-steer; this was partially overcome when later cars would be fitted with low-pivot swing axles. Hoffman’s original request of 1,000 cars was exceeded as production of the semi-hand-built car reached just 1,400 units. The 300SL Coupé was discontinued after the 1957 model year. Today, it remains one of the most recognised and coveted of all sports cars ever built. This handsome 1955 300SL was originally finished in Silver Gray metallic with a red leather interior, precisely the way it is presented today. It has been carefully prepared for vintage rallies and in fact has been raced multiple times in the Mille Miglia. Devoid of front and rear bumpers (which are included with the car) and fitted with very expensive Rudge wheels, it has a very sporting appearance reminiscent of the Gullwings raced in all the great endurance races in the 1950s. One silencer was removed from the exhaust, rendering the car with a knee-weakening exhaust note.

The car is listed in the Gullwing Registry as having been completed on 2nd March, 1955 and shipped the same month to its first owner, Nels Silverthorne in Toronto, Ontario. It has since been acquired by the Hooper Corporate Collection after spending some time in Colorado. Since being acquired by Hooper, it has spent some time in the Auto & Technik Museum in Sinsheim, Germany.

The cockpit is in stock trim, but a set of racing seat belts have been added. It is offered complete with a trunk-mounted spare wheel and tyre, along with a “knock-off” hammer and a fire extinguisher.

Well proven in long distance rallies, this car is the finest driving car in the Hooper Corporate Collection and will serve its new owner very well on any rally, Mille Miglia included of course.