NOTE: The decorative term 'Hans Sloane' derives from an advertisement in Faulkner's Dublin Journal of July 1-4, 1758, announcing "...table plates, soup plates & desart plates enamelled from Sir Hans Sloan's plants" - apparently one of the first identifiable references to the Chelsea factory's popular botanical wares. Most botanical renderings on these Chelsea pieces were taken from illustrations in Philip Miller's Gardener's Dictionary of 1735 and Figures of...Plants depicting specimens from the Chelsea Physic Garden of Sir Hans Sloane (1660-1753), of which Miller, one of the greatest horticulturists of the 18th century, had been appointed 'Gardener' in 1722; and from Plantae Selectae Quarum Imagines after Georg Dionysius Ehret (who had married Miller's sister-in-law), published by C. J. Trew and B. C. Vogel of Augsburg, 1750-53. Many of the botanical specimens copied by the Chelsea porcelain painters from the Ehret volumes, while not always representing plants from the Chelsea Physic Garden, still maintained their connection with Sir Hans Sloane, as Ehret (along with other artist such as Maria Sibylla Merian and J. van Huysum) had been employed by the baronet to copy his collection of 800 species of plants (now dried and preserved in 333 volumes in the Botanical Department of the Natural History Museum, South Kensington). Many of the van Huysum drawings are preserved in the Print Room of the British Museum, which was founded by the bequest to the nation of Sir Hans Sloane's entire collection, upon his death in 1753.
Examples of Chelsea porcelain painted in 'Hans Sloane' style are illustrated by Elizabeth Adams, Chelsea Porcelain, pp. 112-13, figs. 8.23-8.25, where the author also discusses the origins and evolution of this type of decoration at the Chelsea manufactory; and by John C. Austin, Chelsea Porcelain at Williamsburg, pp. 91 and 93, nos. 78, 81 and 82. Three similarly decorated 'Hans Sloane' plates were sold by Sotheby's, London, December 2, 2003, lots 88-90. 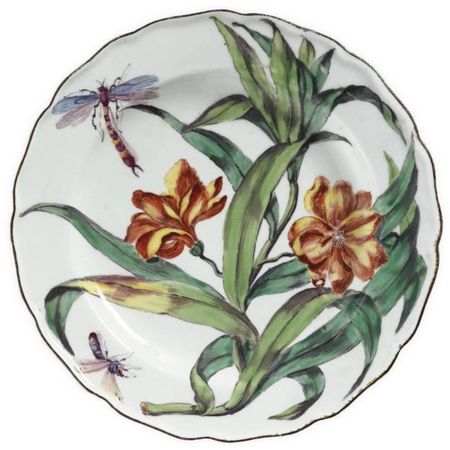 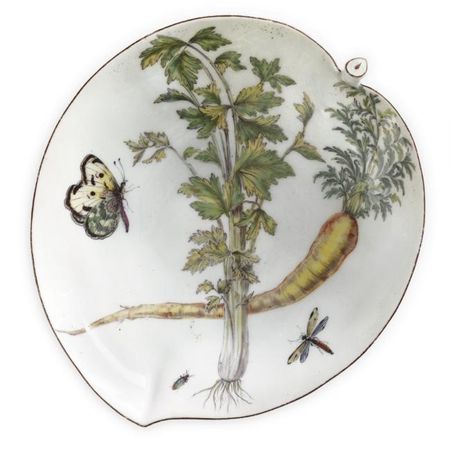