A green-enamelled 'dragon' jar. Qianlong seal mark and of the period

Of well-potted ovoid form, vibrantly painted around the sides in underglaze blue and green enamel with two scaly striding dragon in pursuit of flaming pearls, amidst cloud and flame scrolls, with a band of lappets at the base and the Eight Buddhist Emblems, Bajixiang, encicling the neck at the shoulder; 19.4cm high - Sold for HK$336,000 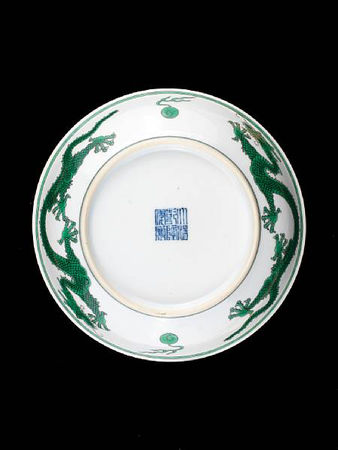 A green-enamelled 'dragon' dish. Qianlong seal mark and of the period

With flaring rounded sides, enamelled to the interior with a central medallion enclosing a green five-clawed dragon writhing in pursuit of a flaming pearl, all outlined in black enamel, the underside decorated with a similar design of dragons in mutual pursuit of flaming pearls against a ground of incised waves. 18.1cm diam. Sold for HK$120,000
:
清乾隆 綠彩龍戲珠紋盤 「大清乾隆年製」篆款