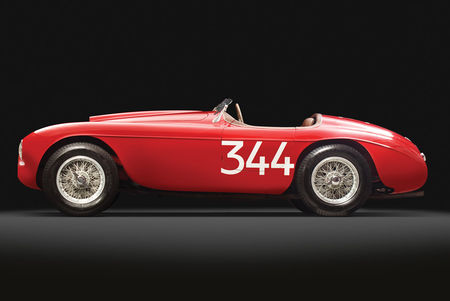 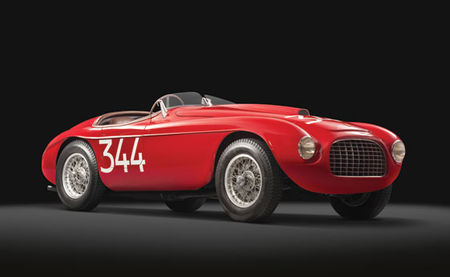 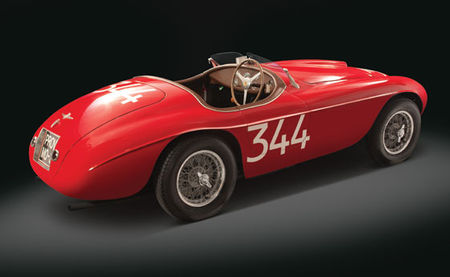 Originally commissioned for the 1949 Paris Motor Show, for which it was painted in the Argentinean racing colors of yellow and blue, 0024 M is considered one of the rarest and most historic early Ferraris, having been owned and raced by many notable individuals in the Ferrari world. The 10th of just 25 examples featuring striking “Barchetta” coackwork from Carrozzeria Touring of Milan, it made its racing debut at the 1950 Mar del Plata in Argentina, finishing an impressive first overall (pictured left). It was also raced in period in the 1951 Mille Miglia, where it was driven by well-known female driver Aprile Palmer, who purchased the car shortly afterwards.

The subject of a complete and total restoration, 0024 M is today finished in red and fitted with its original components, including chassis, numbers-matching engine, gearbox and differential. As an original entrant in the famed Mille Miglia it is eligible for nearly any event open to historic Ferraris. (Estimate Available Upon Request).

“Over the years RM has earned the privilege of offering more important and historic Ferraris than any other auction house. We are thrilled to present another great series of Ferraris at our Arizona sale in January, including the rare 166MM, s/n 0024 M, arguably one of the most meticulously documented Ferraris we have ever had the pleasure of offering,” says Rob Myers, Chairman and Founder RM Auctions.

In addition to the Ferraris, other recent lots include:

RM’s 2011 Arizona auctions kicks off on Thursday, January 20 with the exclusive ‘The British Are Back’ evening sale, followed by the company’s traditional Friday sale on January 21. For a frequently updated list of auction offerings, including star consignments for ‘The British Are Back’, please visit www.rmauctions.com.

For those unable to attend the event in person, Internet, absentee, telephone and iPhone bidding options are available and the auction will stream live online at www.rmauctions.com to provide real-time coverage of the event.