MINNEAPOLIS, MN.- The Minneapolis Institute of Arts (MIA), in conjunction with the National Galleries of Scotland (NGS), the High Museum of Art, Atlanta, and the Museum of Fine Arts, Houston, will present an exhibition of 25 Venetian masterpieces—12 paintings and 13 drawings—including two of the greatest paintings of the Italian Renaissance, Titian’s Diana and Actaeon and Diana and Callisto (1556–59). The exhibition will also include paintings by Tintoretto, Veronese, and Lotto from the NGS collection. The MIA’s presentation of “Titian and the Golden Age of Venetian Painting: Masterpieces from the National Galleries of Scotland” will be on view February 6, 2011, through May 1, 2011.

“We are delighted to be a co-organizer of this fantastic exhibition, which will present the cream of the National Galleries of Scotland’s renowned Venetian paintings to our public,” said Kaywin Feldman, director and president of the MIA. “This will be the first time these two ravishing oils—Titian’s Diana and Actaeon and Diana and Callisto—will travel to the United States.”

In addition to Titian’s Diana paintings, “Titian and the Golden Age of Venetian Painting” will showcase 10 other paintings that illuminate the depth of the NGS collection of Venetian Renaissance works. These include Titian’s Virgin and Child with St. John the Baptist and an Unidentified Male Saint and Venus Rising from the Sea; Lorenzo Lotto’s Virgin and Child with Saints Jerome, Peter, Francis and an Unidentified Female Saint; Jacopo Tintoretto’s Christ Carried to the Tomb; and Jacopo Bassano’s Adoration of the Magi. The drawings are by Titian, Tintoretto, Veronese, and their contemporaries. 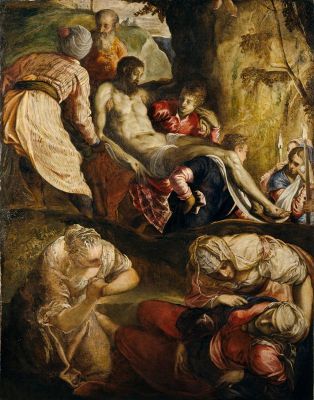 Tintoretto (Jacopo Robusti), Italian, 1518-94, Christ Carried to the Tomb, about 1565. Oil on canvas. Purchased by Private Treaty with the aid of the National Heritage Memorial Fund, 1984 The Legendary Diana Paintings
Originally commissioned by King Phillip II of Spain as part of a series of six paintings, Titian’s Diana paintings were acquired by the Duke of Orleans in the eighteenth century. Following the French Revolution, the paintings entered the private Bridgewater Collection and passed by descent to the Fifth Earl of Ellesmere (later the Sixth Duke of Sutherland), who placed them on long-term loan to the National Galleries of Scotland in 1945. In 2008, the NGS, together with the National Gallery of London, were given the opportunity to acquire these works in order to keep them in a public collection in the United Kingdom. In less than five months, the NGS and London secured the funds to acquire shared ownership of Diana and Actaeon. Currently, the two institutions are campaigning to acquire Diana and Callisto.

Diana and Actaeon and Diana and Callisto
Titian’s Diana paintings were originally part of a series of six large, mythological pictures made for the king, which included Danaë and Venus and Adonis (both now at The Prado, Madrid), Perseus and Andromeda (Wallace Collection, London), and Rape of Europa (Isabella Stewart Gardner Museum, Boston). The Diana paintings, completed when Titian was well into his sixties, depict scenes from Ovid’s Metamorphoses, and represent the Venetian master’s accumulated skill and experience. They were designed as a pair—a stream flows from one painting to the other. One painting shows the goddess Diana learning that her handmaiden Callisto is pregnant by Jupiter; the other portrays the moment Diana and her nymphs are caught bathing by the hunter Actaeon. The Diana paintings are richer in color and composition than their counterparts in the series.

“These two paintings have long been recognized as among Titian’s very finest creations and as supreme masterpieces of Venetian Renaissance art,” said John Leighton, director of the NGS. “Their ambitious scale, the masterful unity of color and subject matter, the art-historical significance and their excellent condition all contribute to the fame and reputation of these works.” Titian (Tiziano Vecellio), Italian, 1485/90-1576, Diana and Actaeon, 1556 - 59. Oil on canvas. Purchased jointly by the National Galleries of Scotland and the National Gallery, London, with contributions from The Scottish Government, the National Heritage Memorial Fund, The Monument Trust, The Art Fund (with a contribution from the Wolfson Foundation) and through public appeal, 2009 Titian
Tiziano Vecelli (c. 1485/90–1576) is considered the greatest of all Venetian Renaissance artists. The technical wizardry, narrative skill, and psychological insight he brought to his works have ensured they remain among the most highly prized of all Renaissance masterpieces. He was initially associated with the painter Giorgione, with whom he shared an interest in landscape settings for lyrical, secular, and sacred scenes. Artistically Titian reached full maturity with his commission for the altarpiece Assumption of the Virgin (1528, now at The Frari, Venice). He worked with remarkable success on a wide variety of works—portraits, mythological scenes, allegories and altarpieces—and painted for the greatest patrons of his age, including Emperor Charles V (who knighted him in 1533) and King Philip II of Spain. He also worked for the leading families of Venice, Mantua, Ferrara, Urbino, and Rome.