Jewellery Owned by Last Link to World of Proust and Monet for Sale at Bonhams, Edinburgh

Jewellery Owned by Last Link to World of Proust and Monet for Sale at Bonhams, Edinburgh EDINBURGH.- Jewellery and silver belonging to the daughter of the famous French society painter Paul Cesar Helleu, one of the models for a central character in Marcel Proust’s monumental novel ‘In Search of Lost Time’ (sometimes known as ‘Remembrance of Things Past’),’ is to be auctioned at Bonhams in Edinburgh on 2 March.

Born in Paris in 1904, Paulette Howard-Johnston (née Helleu), who died in 2009 aged 104, was one of the 21st Century’s last links to the Belle Époque, the world of Proust’s novel, which ended abruptly on the battlefields of the First World War. The writer drew on his friendship with Paulette’s father in creating the character of the painter Elstir whose work provides a constant point of reference and reflection throughout his multi-volume masterpiece.

Paul Cesar Helleu, painted some of the most celebrated women of the day including Consuelo Vanderbilt, the Duchess of Malborough. Two of the Duchess’s gifts to the artist – an 18ct gold cigarette case (est £1,000-1,200) and an early 20th century French pocket watch (est £600-800) feature in the sale.

Helleu’s portrait of his wife, Alice Guerin, is known to readers the world over after it appeared on the cover of Tracy Chevalier’s best selling novel ‘The Virgin Blue’. New Yorkers can still see Helleu’s astrological ceiling decoration in Grand Central Station, painted in 1912.

From a young age, Paulette was used to mixing in artistic and high society circles. Singer Sargent, Manet, Boldini and Monet were family friends and it was Monet who told the young Paulette, “You paint like a bird sings”. Half the year was spent living on her father’s yacht in Deuville, where he entertained his wealthy clients.

Paulette Helleu, who died in 2007, married Rear-Admiral Clarence Dinsmore Howard-Johnston in 1955 and they lived in Paris and London before settling in Biarritz - one of the playgrounds of the super-rich during the Belle Époque. Like her father before her, she was a holder of the Legion d’honneur.

Works of art and furniture from the Howard-Johnston estate will feature in Bonhams Art and Antiques sale in Edinburgh on 23 March. 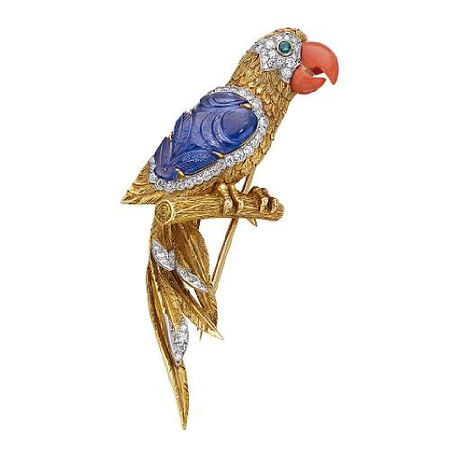 The turquoise body set with seven single-cut diamonds each within a collet with black lacquer detail, to a black lacquer head and polished feet, length 25mm, signed Cartier Paris, maker's marks, French assay marks for gold and platinum, to a case by Cartier.
Estimate: £2,000 - 2,500 Note: By family repute, this cigarette case was gifted to Paul César Helleu by Consuelo, Duchess of Marlborough; born Consuelo Vanderbilt (2 March 1877–6 December 1964). Helleu sketched Consuelo in her late 20s. He then marketed the sketch and produced over 2500 drypoint prints, selling each at 100 francs.