Harmony of Form, Serenity of Color: A Private Collection of "Song" Ceramics At Sotheby's

Harmony of Form, Serenity of Color: A Private Collection of "Song" Ceramics At Sotheby's NEW YORK, NY.- Sotheby’s Asia week series of auctions will include a remarkable single owner collection of Chinese ceramics formed over 25 years. Harmony of Form, Serenity of Color: A Private Collection of ‘Song’ Ceramics will take place on 23 March 2011 in New York. The collection encompasses a wide range of ‘Song’ Dynasty ceramic art which is known for its timeless beauty and elegance. Among the highlights of the 83 lot sale is A Fine and Extremely Rare 'Xingyao' Ewer dating to the 10th century (est. $400/600,000).

The ‘Song’ Dynasty (960-1279) produced some of the finest ceramics ever made. Stonewares (ceramics that are fired at high temperatures to ensure strength and durability) had been made in China nearly 3000 years before they first appeared in the West. By the ‘Song’ period, body and glaze recipes were expanding, and new techniques such as decorating pieces with the help of basic carving tools or carefully administered coloring agents were becoming more popular. It was also during this time that ceramics of this type began to be appreciated as works of art. The exact outcome of each piece varies in the firing, but these ceramics belong to one of four different categories: white, green, black/brown and bright blue-glazed stonewares. Taste in decoration formed and also changed during this period as a new generation began to dominate many areas of culture and there was a move away from traditional colorful painting towards a new style of calligraphic black ink painting. This minimalist decoration, coupled with a concentration on function and form, helps to give ‘Song’ ceramics a striking modernity.

The collection includes superb wares with a range of glazes from different kilns. There are particularly strong examples of the white wares of the ‘Ding’ kilns and ‘Qingbai’ type and the celadons of both ‘Yaozhou’ and ‘Longquan’ type.

The Collection will be on exhibition from the 18th March 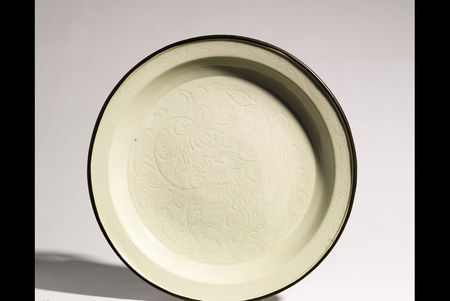 Commentaires sur Harmony of Form, Serenity of Color: A Private Collection of "Song" Ceramics At Sotheby's