MAASTRICHT.-The Moscow based State Pushkin Museum of Fine Arts stages a major exhibition of Dutch drawings in the Bonnefanten Museumin Maastricht. This is the first time that the Pushkin Museum sent such a large number of Dutch drawings abroad. There are ninety items on show until June 19th 2011. The exhibition opened on the same day as TEFAF 2011. Most of the drawings date from the period when seventeenth-century Dutch art was at its peak, and were made by artists who defined the spirit of the times.

Drawings from the Golden Age are only a part of the Moscow collection of Dutch prints and drawings, but they are the best and most coherent part. These works, by the leading masters, trace the development of Dutch drawing from the late sixteenth until the early eighteenth centuries.

Works by Rembrandt and artists in his circle are the undisputed centre of all Dutch exhibitions and the Maastricht show is no exception in this. Over the past few decades however, a critical approach to Rembrandt's oeuvre, not least by Dutch art historians, has reduced the number of Rembrandt attributions significantly. Yet, the Sketch of a Woman Holding a Child, is considered as an indisputable Rembrandt. A product of the late 1640s, it demonstrates Rembrandt's incomparable ability to show a human figure in a shaft of light and air with just a few strokes of the pen.

The most famous drawing in the Moscow collection and the logo of the exhibition, Woman Making Pancakes (also known as The Kitchen in Rembrandt's House), has long been attributed to Rembrandt's school – in the catalogue to Jan Victors – and not to Rembrandt himself. A number of drawings attributed to Ferdinand Bol, Jan Victors, Nicolaes Maes, Willem Drost, Aert de Gelder, an emotionally charged landscape by Abraham Furnerius, two excellent drawings by Gerbrandt van den Eeckhout, and a rare one signed by Hendrick Heerschop reflect Rembrandt's influence most strongly.

A considerable part of the exhibition is devoted to the group known as the Italianates – Dutch artists who went to Rome to study. It were the landscape painters who dominated this field. Without a doubt, Nicolas Berchem stands out as one of the leaders of the Italianates. Four drawings do credit to this artist, but one of them – Fantastic Creature in a Landscape – is unique. Berchem's flickering brush produced a beautiful Italian landscape with a fantastic creature: a seven-headed and seven-armed satyr. Attempts to explain this flight of fancy have proved futile.

The exhibition curators were able to complement the easily attributable, most characteristic and rarest works with debatable drawings whose attribution is open to question. Although they undertook extensive research and made every effort to tie up all the loose ends, there are still uncertainties, and in-debt research continues to this day. This means that the exhibition is also an important tool for further in-depth probing. 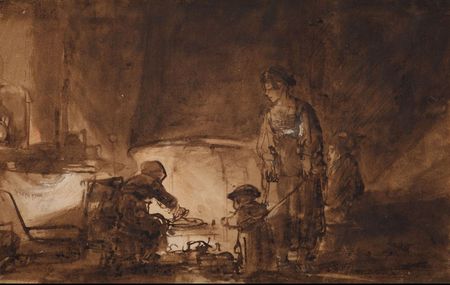 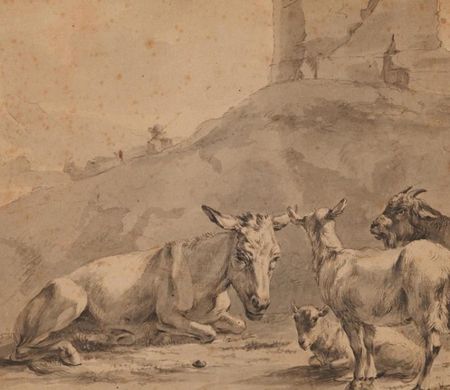