Sotheby’s Asia Week auctions began in New York today with the much anticipated sale of Chinese Ceramics and Works of Art from J.T. Tai & Co . The auction brought a stunning total of $36,312,493 and  was nearly 94% sold by lot. The sale of more than 300 lots took over nine hours, with multiple bidders in the room, on the phones and online competing for nearly every lot. More than 81% of the sold lots brought prices above, and in many cases significantly above, their high estimates, reflecting the reverence for Tai’s legendary connoisseurship and the electric atmosphere in the salesroom. The remarkable prices achieved today were the result of a perfect storm of esteemed provenance, a strong market and attractive estimates.

The sale was led by An Unusual ‘Famille Rose’ and Gold Decorated Vase, Probably Republican Period, which sold for $18,002,500, having been estimated at $800/1,200. The vase was catalogued as ‘Probably Republican’ (early 20 century) and the estimate reflected this dating. There was a healthy debate surrounding  the age of the piece, with a number of collectors clearly feeling it was significantly earlier. In the end, more than seven bidders competed for the vase, which finally sold to an anonymous bidder on the telephone. the pear-shaped body well painted with two circular medallions in famille-rose enamels showing exotic bids amidst luxuriant peonies, magnolia and prunus, reserved on a cobalt blue ground embellished with gilt foliate scrolls, repeated in a band encircling the neck between molded wanfret bands in lime green, flanked by arched gilt painted ruyi-scepter handles, each suspending yellow rope-twist tassels strung with double-fish, wan emblems and chimes, the neck molded with upright leaf lappets in lime green repeated as pendent lappets on the splayed foot above an iron-red and gilt key band, the interior and base glazed turquoise, with a six-character iron-red seal mark of Qianlong; height 16 1/4 in., 41.3 cm. Estimate 800—1,200 USD. Lot Sold 18,002,500 USD to an anonymous.

NOTE: A group of vases each bearing six-character Qianlong seal marks and of the period, show decorative elements that are related to the unusual present example, compare The Complete Collection of Treasures of the Palace Museum. Porcelains of Cloisonne Enamel Decoration and Famille-Rose Decoration, Hong Kong, 1999, vol. 30, in particular the pear-shaped vase with the cobalt and gilt ground and the iron-red key band on the base, ibid., cat. no. 156, as well as the ruyi-scepter tasseled handles, ibid., cat. no. 118.﻿ with deep, rounded sides finely painted around the exterior with composite floral scrolls forming a continuous frieze, all enclosed between a band of scrolling lingzhi above and a band of chevrons enclosing small dots below, the interior painted with six separate and alternating floral and fruiting sprays, all encircling a central lotus flower springing from leafy stems, a band of outlined chevrons framing dots encircling innner rim, the inky underglaze-blue of rich tone with characteristic 'heaping and piling', all supported on a shallow ring foot enclosing a glazed base; diameter 7 1/8 in., 18. 2 cm. Estimate 800,000—1,200,000 USD. Lot Sold 1,594,500 USD to a private Asian.

EXHIBITED: The Use of Blue on Chinese Porcelain of the Ming Dynasty, Fogg Museum of Art, Harvard, Massachusetts, Spring 1947, no. 8.
An Exhibition of Blue-decorated Porcelain of the Ming Dynasty, 29th October 29 - December 4, 1949, The Philadephia Museum of Art, Philadelphia.
Chinese Ming Blue and White Porcelains, The Art Institute of Chicago, Chicago, December 21, 1949 - February 5, 1950.
On loan to the Museum of Fine Arts, Boston the rounded body below a slender neck and flared rim, finely enameled with a prunus tree, peonies, narcissus, and lingzhi issuing from rockwork, the base bearing a Yanghe Tang zhi, ('Hall of Nurturing Harmony') seal mark; height 12 in., 30.5 cm. Estimate 6,000—8,000 USD. Lot Sold  1,314,500 USD to a private Asian. 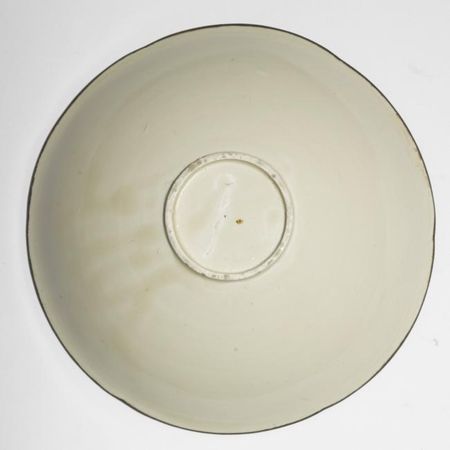 with slightly rounded sides rising to a gently flared six-lobed rim bound in copper, resting on a short narrow foot, the interior freely carved with curling foliage and a single naturalistic leaf with crimped edges, the stem crossing the slightly sunk center and bearing a large open bloom and two smaller furled flowers below a single engraved border, the evenly applied lustruous glaze of creamy-white color and gathering in long drops on one side of the exterior; diameter 8 7/8 in., 22.5 cm. Estimate 15,000—20,000 USD. Lot Sold 392,500 USD one disc carved in shallow relief with a dragon amidst clouds, the other disc carved with a phoenix between clouds, both discs carved with a series of raised bosses on the reverse, the central apertures each fitted with separate reticulated discs, one featuring an archaic shou character, the other a yinyang motif, both discs joined by a squared link carved with a stylized taotie mask linking two dragon loops projection from the sides of the discs, the stone a yellowish tone with some darker and russet patches; length 12 1/4 in., 31 cm. Estimate 10,000—15,000 USD. Lot Sold 434,500 USD  to an Asian trade. 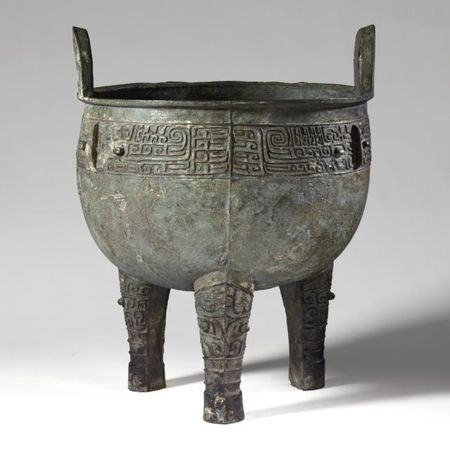 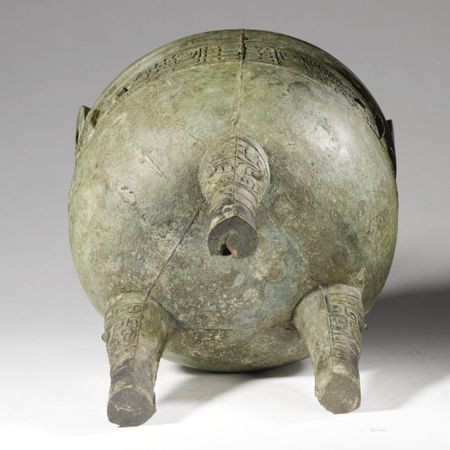 the deep U-shaped body cast below the everted rim and a pair of upright loop handles with a single wide register of three taotie masks bisected by flanges, and comprised of a pair of protuberant eyes and hooked ribbons cast with C-scrolls indicating horns and jaws, all above three slightly tapered legs, each with a further taotie mask with bulging eyes above three raised filets, the surface with a smooth pale gray-green patina; height 14 in., 35.5 cm. Estimate 80,000—120,000 USD. Lot Sold 410,500 USD to a private Asian.